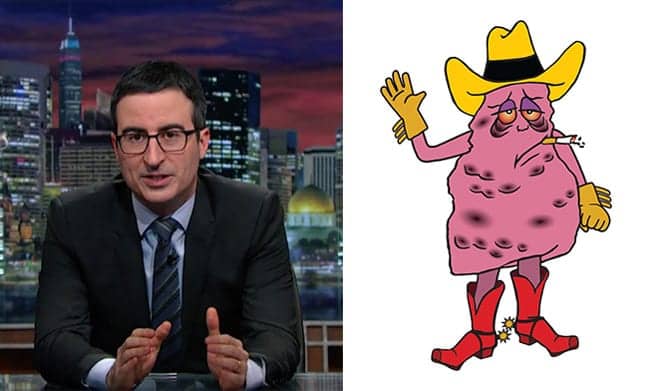 For the better part of 18 minutes, Oliver ‘s HBO program, Last Week Tonight, took viewers on a “world tour” of PMI’s far-reaching use of litigation to threaten countries such as Uruguay, Togo, and even Australia for their efforts to warn citizens of the dangers of smoking.

Despite the success of tobacco marketing restrictions and education here in the US (where the smoking rate has dropped from 43% in 1965 to about 18% today), PMI and its worldwide leading brand Marlboro are prospering in developing nations like Indonesia, where two-thirds of adult males smoke.

After laying out his case for why PMI and its lawyers should be “patted on the back then punched in the face,” Oliver extended an olive branch to Big Tobacco. He offered PMI and Marlboro a new mascot to replace the Marlboro Man, due to the fact four actors who played the iconic cigarette-smoking cowboy died from smoking-related diseases, Oliver reported.

The new mascot, “Jeff the Diseased Lung in a Cowboy Hat,” is Oliver’s combination of the need for governments to warn citizens about the dangers of smoking and PMI’s desire to use branded images to promote its cigarettes. Oliver has already placed the image on billboards in Uruguay and t-shirts in Togo and encouraged everyone to spread the word on social media with the hashtag #JeffWeCan.

Watch the video below.

You can also read PMI’s response to Oliver’s program, here.