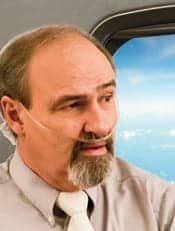 HAST is an inexpensive diagnostic test that effectively calculates a patient’s supplemental oxygen needs for traveling at high altitude. So why aren’t more health care facilities offering it?

For most of the estimated 732 million US passengers1 who traveled by aircraft in 2012, the greatest in-flight concerns were probably a lack of overhead storage and legroom. But for passengers with respiratory conditions who require supplemental oxygen, the reduced air pressures during high altitude air travel can pose dangerous health risks.

Based on FAA flight regulations, aircraft cabins are pressurized to between 8,000 and 10,000 feet, which means, compared to conditions at sea level, the amount of breathable air (including oxygen) is reduced by about 6%. While healthy passengers are unaffected, some passengers with reduced lung function may require additional oxygen to prevent chest pains, shortness of breath, and other hypoxia-related conditions.

But who needs additional oxygen, and exactly how much do they need?

“Nobody really knows,” said Stephen Brown, MD, a board certified pulmonologist, internist, and critical care specialist. “Even though there are some basic guidelines, the guidelines are very weak as to who is safe to fly and who may run into trouble.

“It gets dicey when you have people who are already on oxygen and you’re trying to define how much extra oxygen they need,” Brown said. “Up until now, the general consensus of the literature was if you’re on oxygen, you’re probably safe to fly if you double the oxygen you’re on.”

Estimating, however, is hardly the precise diagnosis that patients and physicians want, especially when traveling in an aircraft at 30,000 feet. That’s why many hospitals across the country are starting to offer high altitude simulation testing (HAST), which can simulate the amount of oxygen that patients will breathe on a flight or while staying at high-elevation locations. There are several variations in testing methods, but generally, patients breathe in a low FiO2 mix of 14% to 15% oxygen, which simulates the air they will breath at altitude. Technologists monitor the patient’s oxygen saturation using a pulse oximeter, and if the patient’s SpO2 levels drop below a predetermined threshold, an arterial blood sample can be obtained for verification, and additional oxygen is titrated until the patient’s oxygenation levels are acceptable. In the event of any cardiopulmonary problems, the test is immediately stopped and the patient is recommended for CP examination.

“There is no better test than simulating the altitude and watching what happens to the person — everything else is just a guess,” said Brown, co-director of respiratory care services for Mease Countryside Hospital in Safety Harbor, Fla, which began offering HAST in October 2012. He said the idea occurred to him after examining a patient who flew to Florida from California. “I was pretty surprised that she hopped on an airplane and that the hospital in California had actually sent her,” he said.

Brown’s team began researching HAST and settled on a method that uses a mask and a valve connected to an H-cylinder tank, which supplies the patient with a low FiO2 mix of 15% oxygen on inspiration. The patient also wears a nasal cannula connected to a pulse oxygen tank regulator that the technicians use to titrate additional oxygen, based on the patient’s oxygen saturation levels, which must stay at or above 90%, Brown said. Technicians monitor the gas flow and patient vital signs and are able to provide an answer to their specific oxygen needs for high altitude travel.

“Our patients like it. They feel better, they feel more comfortable, and we like it because you just don’t feel like you’re guessing,” said Brown. “And as a doctor, it just makes you feel a whole lot better that you have some objective data that you can look at.”

Mease has performed about a half dozen tests since it began offering HAST, according to Michelle Maher, MBA, RRT, RFPT, manager of respiratory care services for the hospital. “We felt it was definitely a benefit to our patients and the community,” said Maher, who noted a positive response to the test, by both patients and local doctors. “The physicians are very excited about it because there are no other hospitals around here locally that offer it.”

Although the high altitude simulation test is not new in the respiratory care world, HAST is not a commonly available test. No aggregate database of HAST providers exists, and an Internet search of the 25 largest US population centers turned up mixed availability results on HAST, which is also known as a Hypoxia Altitude Simulation Test or a Hypoxic Challenge Test. One facility that does provide HAST is the University of Wisconsin Hospitals and Clinics in Madison, whose Pulmonary Diagnostics Lab has offered it for the last 15 years.

“We got interested originally when doctors would ask us, ‘Does this patient need oxygen when he flies, or when he vacations at altitude?'” said Matt O’Brien, MS, RRT, RFPT, manager of the Pulmonary Diagnostics Lab for UWHealth. “Later on the question was ‘If they desaturate, then how much additional oxygen do they need?’ This test evolved as the clinical question changed.”

O’Brien, who serves as diagnostics chair for the American Association for Respiratory Care (AARC), routinely fields HAST inquiries and provides information to other facilities that are considering offering the test, including Mease Countryside Hospital last year. One issue that O’Brien discusses with potential HAST providers is the lack of standardization in testing methods, specifically the delivery of the low FiO2 gas mixture.

“There are no exact standards on how HAST testing is performed,” said O’Brien, who noted that the AARC and the American Thoracic Society / European Respiratory Society (ATS/ERS) have not offered official recommendations on testing methods. “Until there’s a solid consensus on how this procedure should be performed, you will see variations in testing methods.”

But the lack of consensus has not stopped O’Brien and his colleagues at UWHealth from offering their own recommendations. In 2008, they authored an abstract that assessed six different HAST gas delivery methods.2 (See Table 1: click for larger image.) “Comparing the pros and cons of the various methods may assist in the standardization of this diagnostic procedure,” wrote O’Brien and others. Based on several categories, such as patient comfort, ease of communication, cost, and FiO2 stability, the most desirable testing methods were a canopy enclosure, a neoprene mask with a two-way non-rebreather valve, and a venti-mask driven with nitrogen.2 “There are several ways to do this procedure and there are pros and cons to all of them,” said O’Brien. “The canopy, from our experience, has been the most comfortable for the patient.”

Another challenge that limits HAST availability, according to O’Brien, is the fact that manufacturers don’t always offer the specific gas mixtures for the test, which in HAST’s case is normally a FiO2 of 14% to 15%. Mease Countryside Hospital was able to get its gas supplier to create the specific gas mixture for HAST, but “Not all gas suppliers readily provide this gas mix because of liability concerns,” said O’Brien, whose own UWHealth lab creates the low FiO2 mix. It is an option that not all facilities are willing to take on, but could be mitigated by the commercial availability of an oxygen-nitrogen air blender from manufacturers. “Having a commercially available low FiO2 blender for HAST testing would increase patient safety and make it easier to administer the test.” O’Brien said. “The test would probably be more readily available.”

Despite obstacles to its availability, HAST is covered by two Medicare CPT codes, which means, as long as there is a demand, facilities will continue to offer the test. “I foresee it getting more popular when people start understanding what it does for them, how it helps,” said Maher. “And as time goes on and we start seeing more and more COPD patients, Baby Boomers, more and more people flying, I think there’s going to be a bigger demand.”

In fact, the FAA projects that US air travel will nearly double in the next 20 years, growing from an estimated 732 million passengers in 2012 to 1.2 billion by 2032.1 At the same time, diagnostic and mortality rates for respiratory conditions like COPD continue to rise,3 which means the two could potentially overlap and create a greater need for access to HAST.

“We have a lot of folks who fly, and a mistake when flying is enormously costly for the airline, the person, and everybody involved, and could be lethal for our patients,” said Brown. “[HAST is] an inexpensive test to perform and if it were convenient enough for patients to get to, I think many of them would feel better if they could have it done. It’s a community service that ought to be offered.” RT 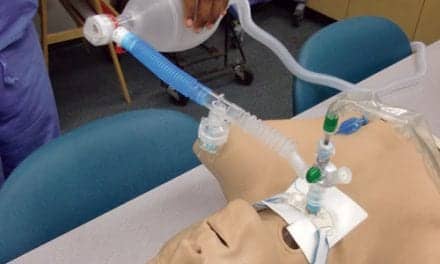 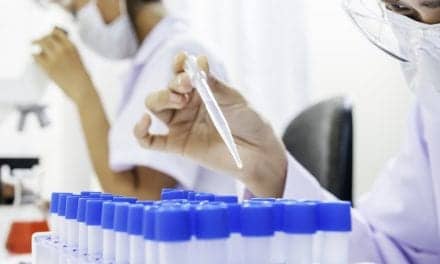