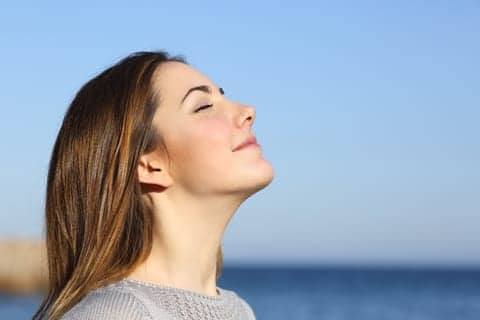 Research published in the Journal of Neuroscience found that fear and memory might be correlated with how we breathe.

The researchers found that when participants inhaled, they were able to recognize fearful faces faster than when they exhaled, though this was not the case with surprised faces.

However, when the subjects performed the same task just by breathing through their mouths, subjects were no quicker at identifying fearful faces, suggesting that only inhalation through the nasal passage boosts fear response.

“If you are in a panic state, your breathing rhythm becomes faster,” explains Zelano.

“As a result you’ll spend proportionally more time inhaling than when in a calm state,” she adds. “Thus, our body’s innate response to fear with faster breathing could have a positive impact on brain function and result in faster response times to dangerous stimuli in the environment.”

In another experiment, the participants were presented with pictures of different objects on a computer screen, which they were asked to remember. Later on, subjects were asked to recall the images.

The researchers found that the subjects were better able to recall the images when they inhaled, compared with when they exhaled.

Find out more at www.eurekalert.com