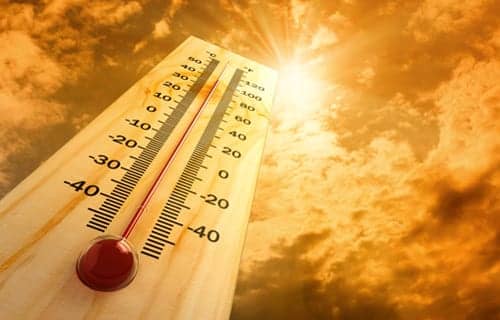 COPD patients who were exposed to warm indoor temperatures had greater disease-related morbidity, including an increase in symptoms, a rise in the use of rescue medications and a decline in lung function, according to a Johns Hopkins study presented at ATS 2014. Higher outdoor temperatures were also associated with increased COPD symptoms.

The study’s results have important implications for the treatment of COPD as the climate gradually becomes warmer, the researchers said.

“Understanding the effect of heat on susceptible populations is increasingly important in order to anticipate and prepare for health effects related to climate change,” said study lead author Meredith McCormack, M.D., MHS. “Although outdoor heat has been associated with increased mortality and with hospitalizations in specific populations, including COPD, less is known about individual-level exposure to heat and the impact on disease-specific outcomes. That was the focus of our study.”

The study included 84 former smokers with moderate to severe COPD who each underwent three week-long observation periods spaced three months apart. During these periods, daily in-home and outdoor temperature monitoring was performed and study participants completed daily assessments of their COPD symptoms, measuring their breathlessness, cough and sputum production, their lung function, and their need for rescue inhaler medications.

To study the effects of heat, investigators looked at the time spent in the warm season, which they defined as the time between the first and last day when temperatures exceeded 90°F in the city of Baltimore, where the study was performed. The study included a total of 602 days of monitoring during the warm season, and patients reported going outdoors on only 48% of those days.

At the end of the study period, the researchers found that increases in indoor temperature were associated with increases in symptoms and rescue medication use and decreases in lung function.

While the study participants spent little time outdoors, on days when some time was spent outdoors, increases in outdoor temperature were associated with increases in symptoms, but they did not affect medication use or lung function. These health effects of heat remained even after accounting for air pollution concentrations.

“These findings support the need for adaptive approaches to COPD treatment to prevent adverse health effects related to increases in temperature,” McCormack said. “Future work is needed to understand the mechanism by which heat impacts individuals with COPD and to identify the most effective intervention strategies. The need for novel approaches is especially critical in the face of anticipated climate change.”