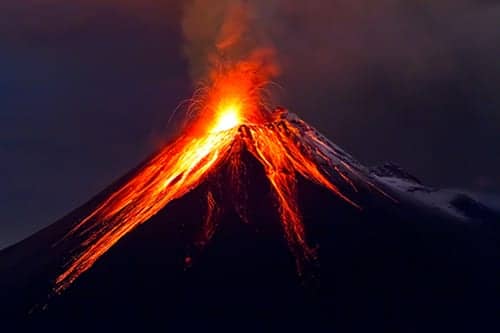 A new study from the active volcano K?lauea, which is on the big island of Hawaii, reports that people — especially children — with asthma are at greater risk of having serious asthma attacks if they live in a community with high levels of the volcanic gas sulfur dioxide (SO2) than if they live upwind of the volcano.

SO2 is considered a “non-threshold” gas, meaning that the amount of SO2 needed to trigger an asthma attack varies person to person. People without asthma or other respiratory illnesses can breath in a larger amount of SO2 before experiencing breathing problems.

Volcanoes can emit SO2 and other airborne chemicals while erupting, and human sources of SO2, like coal plants, are reputed triggers of asthma attacks. Nurse epidemiologist Bernadette Mae Longo, from the University of Nevada, Reno, began to question whether volcanic sulfurous air pollution, known as “vog,” was linked to human health after having conversations with local health care professions and conducting door-to-door surveys near K?lauea.

After confirming that communities downwind of K?lauea were being exposed to volcanic SO2, Longo initiated a seven-year study that ran from 2004 to 2010. She monitored atmospheric SO2 levels and documented the number of people who visited either emergency rooms or local clinics in need of immediate medical treatment for an asthma attack. She compared communities living downwind of the volcano, and thereby exposed to SO2 emissions, to communities upwind of the volcano. Longo ended up recording information from more than 1,000 visits from patients, who ranged in age from three months old to more than 89 years.

Study: BPA Exposure in the Womb Linked to Asthma