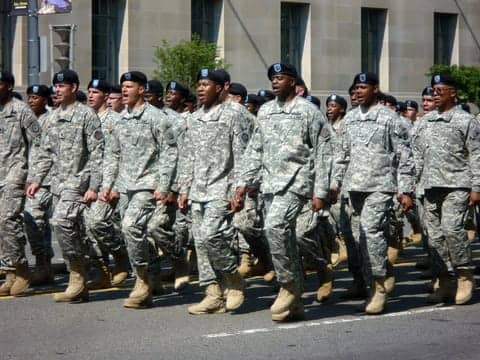 A Military Times news report indicates that army researchers are looking for Afghanistan and Iraq veterans with breathing problems, such as wheezing or shortness of breath, to study the impact deployments may have on lung health.

With some combat veterans returning from war with respiratory illnesses, including asthma and constrictive bronchiolitis, Army physicians are beginning the third phase of a long-term study into deployment-related pulmonary health.

The Military Times news report notes that the Study of Active Duty Military for Pulmonary Disease Related to Environmental Deployment Exposures (STAMPEDE) seeks to determine what lung diseases may be associated with overseas military operations, according to retired Army Col. Michael Morris. Morris says, “There are complicated diagnoses out there. We want to be able to explain to a general medical public the difference between the average citizen and the military population who may have different exposures.”

Previous studies conducted under STAMPEDE include a study of 50 service members to evaluate post-deployment respiratory symptoms and an analysis of the health of 400 soldiers with career-limiting asthma to see whether the incidence of the disease was higher in those who deployed than those who didn’t.

The STAMPEDE study researchers are seeking active-duty or retired personnel who deployed to a combat zone and developed respiratory symptoms during or shortly after deployment and still have symptoms, according to the Military Times. Study participants will be required to spend a week in San Antonio or at Walter Reed National Military Medical Center in Maryland. Participants will undergo blood work and chest imaging, breathing tests, exercise tests, a vocal cord exam, electrocardiograms, and bronchoscopy.

Some veterans of Iraq and Afghanistan have developed debilitating respiratory illnesses after serving in these regions, with many blaming the military’s use of open-air burn pits to dispose of trash. Other studies have shown that particulate matter in the air may have damaged airways as some veterans exposed to a sulfur fire in Iraq in 2003 developed chronic disease.

A Vanderbilt University study also diagnosed 38 soldiers from Fort Campbell, Ky, with constrictive bronchiolitis. Morris says, “The study from Vanderbilt was biased in favor of one disease, making other people think they have that disease, but it’s more complicated than that.”