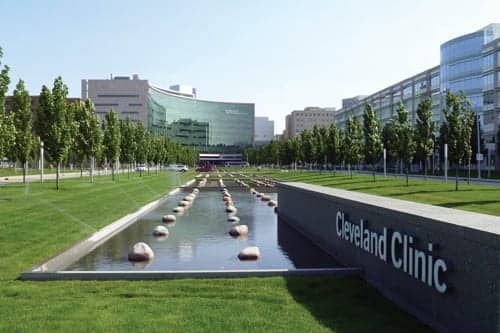 A closer look at one of the top respiratory care hospitals in America, whose clinical-home connected care model adds value and ensures continuity of care.

Ten years ago, the Cleveland Clinic, whose Respiratory Institute is ranked #3 in the world, bought a durable medical equipment (DME) company and decided to offer in-home respiratory services to patients. When Cleveland Clinic Respiratory Therapy at Home (CCRT) launched, the program had not been formalized, worked with a skeleton staff and served approximately 300 patients. Today, the department has quadrupled the number of employees and boasts more than 16,000 patients.

When Robert McQuown, RRT, who recently retired, began as the first manager, the department comprised two therapists, one driver and one patient service representative. “We anticipated serving two patients a day. During our first month we filled 45 orders,” he said, noting that leisurely two-hour lunches were the norm at that time.

Business grew steadily, exploding in 2006 when the department added 10 therapists, four drivers and six patient representatives to its staff. “The days of being able to sit at the picnic table were gone,” McQuown said. “Our staff of 20 was now taking care of more than 15,000 patients.”

The program services 14 counties and in April 2015 had 262 new starts, 201 of which were CPAP and BiPAP patients. McQuown anticipated the bulk of the business would be oxygen-related, but in reality only about 2,000 patients receive oxygen. “We have 11,000 active CPAP patients and the rest are suction and aerosol,” he said. “In January and February, we did between 225 and 250 CPAPs a month. The average home care company does 40 to 60.”

Since Cleveland Clinic is world-renowned, patients from around the globe travel to Ohio for care. It’s not unusual for McQuown and his team to offer respiratory services in its clinic for dignitaries, professional athletes and royalty from across the country, Europe and Middle Eastern countries. “We have an International Continental Hotel on site and foreign royalty often rent an entire floor,” he said. “We hook them up on CPAP and they return home.”

Closer to home, the program enjoys a good relationship with Cleveland Clinic’s sleep labs. “They are our number one referral source,” McQuown said. “We have one RT stationed at the Fairhill Sleep Lab full time. He is constantly busy doing set up and other tasks for the 18 sleep doctors who work there.”

The Richard E. Jacobs Health Center in Avon, Ohio, also benefits from the home program. “One of our RTs works there three days a week and is doing more setups than the RT at the sleep lab,” McQuown noted, adding that a third location, the Willoughby Hills Family Health Center, is also now seeking an on-site RT.

During the last year, CCRT began streamlining operations and started offering group appointments every Saturday to six to eight patients with the same diagnosis. “The patients really like this format. One patient might raise a question in a group setting that another patient hadn’t thought of,” he said. The sessions run for two to two-and-a-half hours; two smaller groups take place during the week to accommodate more patients.

Another time-saving initiative involved mask fittings. The program found that patients’ late arrivals disrupted the workflow in the clinic. “Now we hold a mask fitting clinic on Tuesday mornings and Thursday afternoons. The therapist can actively be seeing other patients and still take care of mask fittings. This expedites volume,” said McQuown.

Technology has also made in-home CPAP administration more efficient. Upon setup, the therapist simply plugs a wireless modem into the computer, McQuown explained. When patient data is received, it is electronically cut and pasted into the electronic medical record (EMR). While this electronic system facilitates patient care, it also expedites Medicare reimbursement, he pointed out. According to McQuown, in November 2008, the Centers for Medicare and Medicaid Services (CMS) passed a compliance rule mandating proof of use in order to reimburse for the machine. The wireless modem captures all pertinent information and saves it to the EMR offering documentation regarding usage.

Additionally, the growing use of electronic prescriptions enables McQuown and his team to quickly respond to medication requests. “This adds to the performance of keeping patients from readmission,” he said.

Cognizant of the value of continuing education for staff, McQuown has found a way to offer educational opportunities, in spite of budget and time constraints. For instance, the sleep lab holds three-day symposiums on occasion, which present an ideal chance to enhance education. “We set up a booth and also get to listen the program,” he said, noting that the RTs share time manning the booth to maximize the benefits from the symposium “We also subscribe to an online program to get CEUs. The staff has an obligation to access the program during their free time. It’s a half-hour program and once you pass, you receive the CEUs. Our program is economical and works for us.”

McQuown credits his staff for the smooth and successful operation of the home program. “We’ve hired good staff. They are bright and do a great job. Our patient satisfaction scores are good and we have low turnover,” he said. “Cleveland Clinic has a prestigious reputation. We are a world leader in healthcare and are trying to set precedence and be economically responsible. We’d like to see everyone else follow our example.”

The success of the RT at Home program relies on cooperation and collaboration among all hospital departments. McQuown explained that he and his staff try to routinely visit various departments within the Clinic. “We show how we can make their lives easier when they use our services rather than an outside company. We show them our process and our procedures,” he said. “We love to be a resource so people get to know us.”

McQuown also keeps the RT at Home program in the spotlight by attending monthly RT manager meetings. “Ninety-nine percent of the matters discussed relate to the hospital, but I like to be a presence at those meetings.”

Supervisor Mary Mertens, RRT, who has spent the last eight of her 40-plus year career at Cleveland Clinic, focuses on the clinical aspects of the job, such as quality improvement (QI), employee engagement and new equipment in-service training, to keep the department operating efficiently.

One of the most recent QI projects involved the development of a new policy for tracheostomy patients who are discharged to home and require intense follow-up care. “This involves a lot of education and is scary for the patient at home,” Mertens said. To reduce patient anxiety once they are home, the department created a competency checklist for every RT and developed patient education tools, including a troubleshooting guide and instructional booklet. “We’ve been tracking the number of patient phone calls and have seen a significant improvement,” she noted.

The department also identified delays in flow-charting and has worked to expedite the process. Mertens explained that a lapse posed a problem in scheduling patients in a timely manner. “It was taking five to ten days for the scheduler to reach the patient,” she said. “We spent six months identifying the deficiencies and developed a new process.”

The RT at Home Program complements Cleveland Clinic’s inpatient services in several ways, according to Karla Balasko, director of the Cleveland Clinic Respiratory Therapy Program. The home program has full access to the Clinic’s EMR system, which enables physicians to electronically order home RT services. Also, the therapist can review the inpatient record, as well as document directly into the record, improving communication and continuity at the time of care transition. Having access to the EMR also allows the therapist to retrieve diagnostic information and face-to-face documentation without contacting the provider, which speeds up the referral process. “Inpatient RTs can access the RT at Home therapist by calling one phone number with no answering machine or lag time in response,” Balasko said.

Balasko said, “The value of the RT at Home program is the ability for continuity, improved communication and operational efficiencies gained during care delivery by sharing the same electronic medical system.”

As the department transitions to a new manager, Mertens anticipates some exciting changes. “We are now limited to respiratory but could open the door to hardware, such as canes, walkers and wheelchairs,” she said, but noted that more space, trained staff and delivery vehicles would be needed. However, adding medical devices to its list of services could offer better continuum of care for the patient, she pointed out.

Also, RTs could become more involved in the discharge process, according to Mertens. “Case management usually handles going home care, but there is a lot of room for RTs to do this. Having educational resources across the system would be incredible,” she said. One project under consideration is an instructional video for patients going home on oxygen. Mertens explained that before discharge the patient could access the video on the hospital television channel and view the instructions.

In the future, Mertens hopes to institute more cross training for staff. For instance, instead of just acting as service technicians, drivers could become more involved in tasks that don’t require licensure. “That would be a very big plus for the department and take the drivers up a notch for what they could provide to the patient,” she said. “Also, RTs do CPAP setups the bulk of the day. Although we appreciate the business, we have more skills and can take on more responsibilities.” One area in which Mertens would like to see expansion is pediatric practice. “I’d like to develop a stronger program and hire more RTs who are knowledgeable about pediatrics.”

As he prepares to retire, McQuown notes that working at Cleveland Clinic has been the “crowning achievement” of his career and he expects the program to experience continued growth in the future. “It’s a most challenging job, but also a very rewarding job. We touch lives everyday.” RT