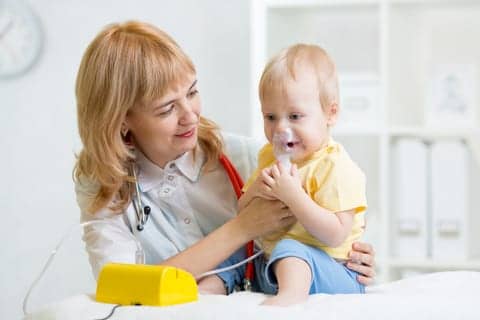 The Asthma and Allergy Foundation of America reports that approximately 50 million people in the United States are affected by nasal allergies, and that number continues to increase. In fact, 30% of adults and 40% of children currently suffer from allergies. Furthermore, researchers noted that allergic diseases—and that includes asthma—are the 5th leading chronic disease in this country. For children under the age of 18, allergic conditions are the 3rd most common chronic illness. And the Global Burden of Disease Study published in the Lancet Respiratory Medicine Journal reported that 400,000 people died from asthma-related causes in 2015.

About 1 in 10 children (10%) had asthma and 1 in 12 adults (8%) had asthma in 2009. In 2010, 3 out of 5 children who have asthma had one or more asthma attacks in the previous 12 months. Findings from a 2015 study1 recognize allergy and viral respiratory infections as two of the most important risk factors for asthma exacerbations. Moreover, the study noted that exacerbations can be attributed to several causes, including viral and bacterial infections; environmental factors, such as pollutants, irritants, allergens; and personal risk factors, for instance level of control and adherence to recommended medical therapy. Teasing out the underlying risk factors can help determine the most appropriate treatment option.

One of the first orders of business when a patient presents at the emergency department (ED) with an asthma attack or allergy-related respiratory issue is to conduct a full physical assessment, according to Rachel Taliercio, DO, Pulmonary Medicine at the Cleveland Clinic. “We look at how the patient is doing? What is the work of breathing? Are they speaking in full sentences? We check their vital signs, respiration and heart rate,” she said. In all cases, even patients with severe attacks who don’t have classic findings, the treatment is the same. “We urgently get the patient a quick acting medication.”

The first line of treatment is the administration of a short-acting, quick release bronchodilator, such as albuterol (Ventolin), via nebulizer. Taliercio reported that a consensus in the medical field on whether to use continuous or small volume nebulization has not been reached. “One may be used over the other. Sometimes there are provider specific preferences,” she said. “It all depends on how the patient looks clinically. If the condition might warrant ventilation, then continuous nebulization should be used. It’s an individual decision.”

In most cases, nebulizer treatment will be administered every four hours or four times a day. “Some patients may need back-to-back treatments every hour,” Taliercio said. During treatment, a clinician monitors the patient for heart palpitations or other anomalies in vital signs, although most quick acting, short-term medications are safe, she noted. But if a patient is taking a nebulizer treatment more often than four times a day or every four hours and symptoms are still not resolved or asthma is not controlled, the clinician will most likely adjust therapy. Taliercio said, “If there are no improvements, there are algorithms for stepping up therapy. You might give oral steroids for the treatment of asthma.”

For most patients, nebulization on a continuous basis poses no serious health risk. Sayantani B. Sindher, MD, clinical assistant professor of Allergy and Immunology in the Department of Medicine, division of Pulmonary and Critical Care Medicine, Stanford Children’s Health, said, “Overall, high-dose continuous albuterol nebulization is not associated with significant toxicity and the benefits outweigh the risks – with shorter PICU length of stay and lower rate of subsequent mechanical ventilation.”
However, she did point out that, in some cases, continuous nebulization of albuterol in healthy adults and children has been associated with a decrease in serum potassium. “In fact, sometimes in instances of hyperkalemia, we treat with albuterol to lower the potassium level.”

Captain Steven C. LeCroy (Ret) MA, CRT, EMTP, Clinical Manager, National Distribution for Mercury Medical, indicated that the major difference in therapy, when it comes to severity of respiratory distress, is how the nebulizer interfaces with the patient. “The interface options are a mouthpiece, mask or intubation and being ventilated. For the mild to moderate respiratory distress patient, a mouthpiece can be a very effective method,” he said. “Using a mask is often less effective due to the waste of medication and patients often can’t tolerate the mask. Using an in-line nebulizer with a bag-valve-mask or ventilator works well if set up correctly.”

LeCroy added that, depending on the cause of the airflow obstruction, nebulized medication can be very effective. “There can be multiple variables causing the obstruction, like bronchospasm, airway swelling or increased mucus production seen in asthma. In this case, using a combination of therapies would be the most effective,” he said. “For nebulizers to be effective they need to be started in the early stages of the problem. Continuous nebulizer should be considered over small volume nebulizers to help maintain a therapeutic level of medication for a longer period of time. Using a nebulizer with CPAP should also be an option to improve the effectiveness of nebulized medications.”

Taliercio reported that patients who present with allergy-related respiratory problems are also treated initially with nebulizers and additional antihistamine or steroids, when necessary. Patients with comorbid conditions are treated similarly after obtaining a complete medical history that includes a review of all existing diagnoses and medication. But if short-acting dilators, such as albuterol, affect heart rate, the medication would be switched to atrovent (Ipratropium), which does not cause tachycardia, according to Taliercio.

Other comorbid conditions, particularly in the elderly, must be taken into consideration when determining the most appropriate treatment for asthma exacerbations or allergy-related respiratory issues. However, Taliercio points out that “…by no means are nebulizers a standard of care in older adults.” She emphasized that decisions on which device is best to open the airway and restore appropriate respiratory response should be based on the individual’s preference.

A metered-dose inhaler (MDI), particularly one with a spacer or chamber to enhance the treatment, might also be used in some patients, although this device requires some education as well as coordination, according to Taliercio. “An MDI is similarly efficacious [as a nebulizer] in restoring lung function, but a nebulizer doesn’t require education.”

Taliercio pointed out that treatment with an MDI is also relatively quick, while nebulizer treatment typically takes longer to administer. “However, [this method] is preferred for the elderly who can’t coordinate to use an MDI.” For instance, she noted that an older person with osteoarthritis might be unable to manage MDI use, so nebulizer treatment might be a better option.

Although the use of nebulizers is widely accepted, some researchers suggest reconsidering the practice. Three physician researchers from the Department of Family Medicine at the University of Chicago examined a Cochrane meta-analysis of 39 randomized controlled trials (RCTs) and subsequently concluded that a metered-dose inhaler (MDI) with a spacer could offer the same benefits as nebulizer treatment, but with fewer side effects. In their study,2 they found hospital admission rates and length of hospital stay were equal when either an MDI or nebulizer was used. They also found children spent approximately 30 fewer minutes in the ED when given an MDI with spacer, and both children and adults experienced a lower increase in tremors and pulse rate. Based on these findings, the researchers suggest physicians rethink automatically ordering nebulizer treatment for patients with mild or moderate asthma exacerbations who are two years or older.

Sindher reported that jet, mesh and ultrasonic nebulizers are commonly used today. The first type, which is bulky and the least efficient in medication delivery, has been around for more than 25 years. Mesh nebulizers are quiet, light and portable and deliver medication quicker than the jet version. “But they tend to be expensive and require diligent cleaning after each use,” she said.

Small, quiet and quick to deliver drugs, ultrasonic nebulizers are the most efficient, Sindher noted. “However, these devices tend to malfunction frequently and commonly used medications in suspension cannot be used with this device,” she said. “These machines are also relatively expensive.”

In recent years, technology has led to three major changes in nebulizers, according to LeCroy. “First is breath-actuated nebulizers where the nebulizer only nebulizes the medication during inhalation. It’s been reported this type of nebulizer wastes less medication and takes less time since they often operate at higher flow rates,” he said.

Research backs up these claims. A study3 released this past May sought to determine if albuterol delivered via a breath-enhanced nebulizer could reduce length of stay in the ED when compared to treatment with a traditional standard jet nebulizer. Subjects included 50 children from the age of 3 to 18, who presented at a pediatric ED with asthma symptoms; they were diagnosed with moderate to severe asthma exacerbation. Half of the subjects received up to two continuous albuterol nebulization treatments with a standard device and half received up to four rapid albuterol treatments with a breath-enhanced nebulizer. Findings showed that the latter group had a shorter ED length of stay (118 minutes) versus the former (163 minutes).

LeCroy also reported that the quality, durability and reliability of nebulizers has improved in recent years, facilitating more accurate medication delivery in the right size and micron range. He said, “If the medication is delivered outside the therapeutic range the treatment is not very effective.”

A third important change to nebulizer technology relates to the delivery method, according to LeCroy. Continuous nebulizers versus small volume nebulizers can hold larger quantities of medication, he explained, “some as much as eight pre-filled doses of albuterol and lasting up to four hours.” Thus, treatment can be delivered for a longer period of time when necessary.

Although nebulizers are simple devices and relatively easy to use, LeCroy asserted the most difficult task is communicating the importance of keeping the device clean, especially for home use, and when to use it. “Patients often skip treatments and then when they are in crisis start to use them back-to-back. A key is if the treatments are being used more often than what the doctor ordered, something needs to be changed or added.” RT