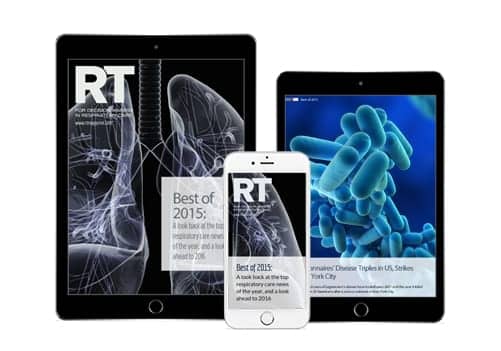 To accompany our 2016 Buyer’s Guide, RT has published an exclusive tablet-only “Best of 2015” edition for December that takes a look back at some of the year’s most important respiratory, critical care, and emergency medicine news and research. In addition, this month’s tablet spotlights some stories and products to watch in 2016, along with a bylined feature article from leaders EHR data security.

Below is the table of contents for the special issue, which can be viewed via our RT app on your tablet or mobile device (including iPads, Kindles, and any iOS or Android-enabled smartphone).

A Look Back at the Year’s Biggest Industry News

The Year of Pharmaceuticals

2015 was an important year for patients with respiratory diseases, as the FDA approved a host of new pharmaceutical treatments.

Confirmed cases of Legionnaire’s disease have tripled since 2001 and this year it killed more than 20 Americans after a serious outbreak in New York City.

Asthma-COPD overlap syndrome (ACOS) accounts for approximately 15-25% of all obstructive airway diseases, but distinguishing between ACOS and asthma or COPD alone can be a challenging diagnosis.
By Bill Pruitt MBA, RRT, CPFT, AE-C, FAARC

A Rough Year for ICS

Recent studies have suggested that, for some patients, inhaled corticosteroids may have unintended negative consequences.

Hope for Sepsis and ARDS Patients?

UK scientists are developing a potential “first-in-class” pharmacological therapy for sepsis and acute respiratory distress syndrome, which are among the leading causes of death in hospitalized patients worldwide.

Five Tips for Keeping Patient Information Safe in the Cloud

In the digital age of electronic health records and cloud-based data, protecting patient privacy and hospital information is all the more important for healthcare providers.
By Asaf Cidon, CEO, Sookasa

Topics and Products to Watch Next Year

The proposed FDA rule that would clear the way for federal regulation of electronic cigarettes is currently under review by the White House’s Office of Management and Budget. Implementation is expected in early 2016.
By Cassandra Perez

Respiratory product manufacturers are looking to capitalize on the industry’s growing use of high-flow oxygen therapy by offering new high-flow nasal cannula technology.

Even though the 2015-16 flu season is already underway, the CDC and other public health agencies are continuing to encourage vaccination against the disease, which is responsible for thousands of American deaths each year.
By Phyllis Hanlon

Don’t forget to download the tablet/mobile edition via one of the following providers: Study Explores the Social Norms of Electronic Cigarette Use by Teenagers