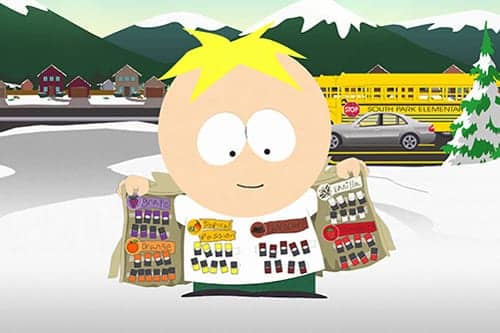 Youth vaping has been a public health problem almost as long as e-cigarettes have existed but this week that epidemic finally reached the students of South Park Elementary.

Comedy Central’s hit TV show took on vaping in its fourth episode of the season, “Tegridy Farms,” when a student is confronted for selling e-cigarettes to kindergartners.

That student, “Butters,” boasts about selling vapes in a variety of flavors like “Topical Passion,” only to be punched out by his friend Eric Cartman. While some students crusade to end the sale of e-cigarettes at the school, others push the devices on the student body using the tried and true sales pitches like “they’re healthier than cigarettes” and “enjoy these fun, fruity flavors.”

Comedy aside, the episode spotlights the pervasiveness of vaping in America’s schools and the industry’s marketing practices to youth.

While the legal age to consume electronic cigarettes is 18 (21 in CA, HI, ME, NJ, OR), the Surgeon General warns of the effects of nicotine on the brain, which continues to develop until age 25. Some vapes, like Juul e-cigs, contain double the amount of nicotine as other vapes, and Juul users had greater concentrations of nicotine than traditional smokers.

Despite health warnings, the “Big Vape” industry has consistently been accused of marketing devices to youth by using the kid-friendly packaging and flavors like those highlighted in the South Park episode. As a result, the FDA has threatened to take all flavored e-cigarettes off the market, but has also pushed back industry regulation until 2022 at the same time. (In March a group of seven health agencies — including the American Academy of Pediatrics — sued the FDA for delaying regulation.)

While South Park Elementary is purged of vapes by the end of the episode, America’s schools likely won’t have the same success against the $1.16 billion e-cigarette industry any time soon.

How Does Cannabis Use Affect Brain Health?

Colorado Bill Would Ban Sale of All Flavored Nicotine Products