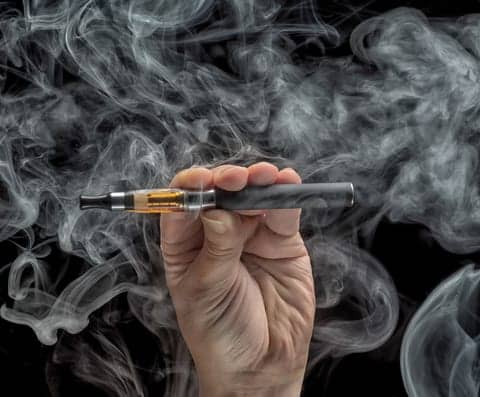 A new study reveals that with just one exposure to e-cigarette vapor, participants in a study showed a diminishment of cough reflex sensitivity. The 30 subjects in the study were healthy adult lifetime nonsmokers, and the researchers measured cough reflex sensitivity with the use of capsaicin, the pungent extract of red pepper. The capsaicin cough challenge involved the inhalation of single breaths of ascending concentrations of capsaicin until the concentration induced five or more coughs, as noted on a news release from the American Thoracic Society (ATS).

The ATS news release notes that the subjects underwent couch challenge at baseline (day 1), 15 minutes after they were exposed to an e-cigarette (day 2), and then 24 hours later (day 3). The e-cig “vaping” session for each participant involved 30 puffs of the disposable e-cigarette Blu, with each puff 30 seconds apart, which provided a nicotine exposure similar to that of one tobacco cigarette.

Cough reflex sensitivity was considerably diminished in subjects compared with baseline; however, 24 hours after the e-cigarette exposure, cough reflex sensitivity returned to baseline. The mean log C5 at baseline was 0.50 ± 0.48 (SD), compared with 0.79 ± 0.62 15 minutes after e-cigarette exposure and 0.55 ± 0.53 at one day after exposure, as indicated on the ATS news release.

Lead author of the study Peter Dicpinigaitis, MD, says, “Although e-cigarettes have become popular worldwide, very little is known about their effect on the respiratory system. There has been no other research to our knowledge on the effect of e-cigarette use on the sensitivity of the cough reflex.” Dicpinigaitis adds, “We still need to understand the clinical significance of this effect and investigate the consequences of chronic e-cigarette exposure.”