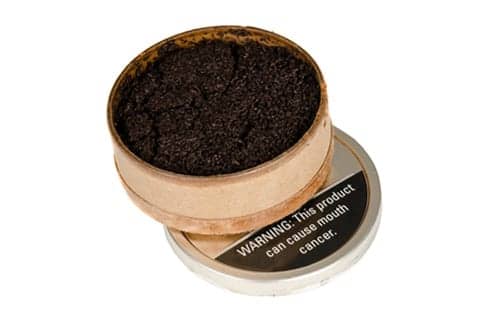 People who stop using smokeless tobacco after a heart attack may extend their life expectancy similar to people who stop smoking, according to new research in the American Heart Association journal Circulation.

Researchers analyzed the effect of quitting the use of “snus,” a moist Swedish smokeless powder tobacco kept under the upper lip. It’s a variant of “snuff,” but doesn’t need to be spit out.

During two years of follow-up, 14 snus-quitters died and 69 of those who continued using snus died. In a mathematical analysis estimating the number of people who die in 1,000 years, researchers determined that the death rate was 9.7 per 1,000 person-years at risk for snus quitters and 18.7 for snus users.

After considering factors like age, gender, other tobacco use, occupation and participation in a cardiac rehabilitation program, researchers said those who stopped using snus had nearly half the mortality risk, similar to the benefit observed with smoking cessation.

“We didn’t expect to see such a strong association among those people who stopped using [smokeless tobacco],” said Gabriel Arefalk, MD, lead researcher and cardiologist at Uppsala University Hospital in Uppsala, Sweden. “After a heart attack, no doubt smoking cessation reduces the risk of death approximately one third and is really a cornerstone of cardiac rehabilitation worldwide. For smokeless tobacco, we did not know.”

Although the study focused on snus, Arefalk said nicotine levels are comparable to levels in snuff.

Snuff use is increasing worldwide. In the largest market, the United States, about 1.7 billion cans are consumed each year. The largest concentration of a population (prevalence) using snuff is in Sweden, where 20% of men and 3% of women use snus daily.