According to new research presented at the [removed]105th International Conference of the American Thoracic Society[/removed] (ATS) in San Diego, chronic exposure to environmental tobacco smoke (ETS) in childhood may contribute to early emphysema later in life. Although ETS is known to be associated with a variety of serious health problems, it had not previously been associated with the development of emphysema over the life course.

"Emphysematous ‘holes’ in the lung that begin as small areas of damage or impaired development may expand according to a fractal trajectory after an earlier insult," said Gina Lovasi, MPH, PhD, of Columbia University, New York, in a press release from the ATS. "We hypothesized that environmental tobacco smoke in childhood may be one such early insult, associated with signs of early emphysema detectable on computed tomography (CT) scan in adulthood and perhaps lower lung function detectable by spirometry."

To determine whether chronic ETS exposure in childhood could lead to the development of early emphysema later in life, Lovasi and colleagues analyzed data from a sample of 3,964 relatively healthy adults recruited as part of the Multi-Ethnic Study of Artherosclerosis (MESA) study. The focus of the researchers was on 1,781 adults who had never smoked. The MESA-lung study asked each participant, "In your childhood, did you live with a regular cigarette smoker who smoked in your home?" to assessed childhood exposure to ETS.

The researchers found that non-smokers who reported childhood exposure to ETS were more likely to have CT patterns that looked like early emphysema (after adjusting for a number of potentially confounding variables, including childhood asthma and living with a smoker as an adult). Large holes were relatively more common, and more of the lung volume appeared to have low, air-like density in the nonsmoking participants who reported childhood exposure to ETS. The association was not detectable among current or former smokers. The researchers did not find an association for childhood ETS exposure and lung function as measured by spirometry.

"The take-home message from our analysis is that exposure to tobacco smoke during childhood may be associated with detectable differences in lung structure, and perhaps early emphysema, later in life among people who do not themselves smoke," said Lovasi. "These findings might also help researchers to understand how lung damage develops. However, the observed
associations are small and the implications of the novel CT-based measures for long-term health this research needs to be replicated." 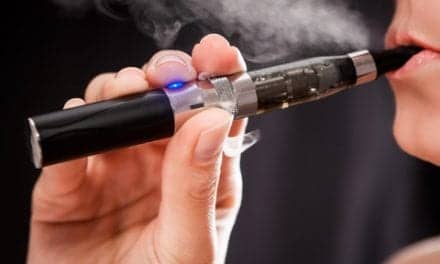 Exposure to E-Cigarette Vapor a Cause for Concern