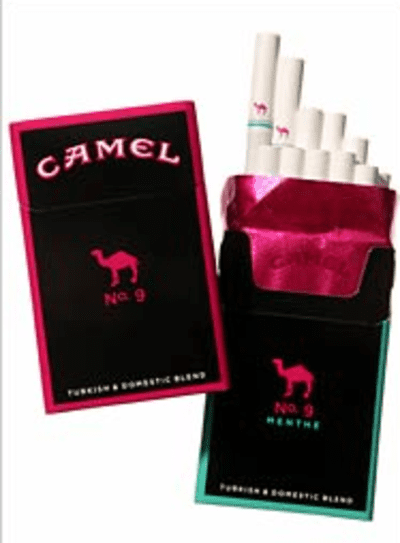 A new report titled “Deadly in Pink: Big Tobacco Steps Up Its Targeting of Women and Girls,” was issued on February 18, raising flags about Big Tobacco’s two largest—Philip Morris USA and R.J. Reynolds— and their recent marketing campaigns targeted at women and girls.

The report outlines marketing campaigns from both tobacco companies in the last 2 years that depict cigarette smoking as feminine and fashionable and highlights the lack of government regulation for tobacco products that allows such campaigns to take place.

R.J. Reynolds launched a new version of Camel cigarettes in January 2007 called Camel No. 9. Camel No. 9 cigarettes are packaged in shiny black boxes with pink and teal borders. The name evokes imagery of famous Chanel perfumes and ads feature flowery imagery of vintage fashion. Ads featured slogans such as “Now available in stiletto,”—pitched to “the most fashion forward woman.” Ads ran in magazines such as Claire, Glamour, and InStyle that carry a predominately female readership.

“These new marketing campaigns by Philip Morris and R.J. Reynolds show contempt for the health of women and girls,” says Matthew L. Myers, president of the Campaign for Tobacco Free Kids. “The tobacco industry’s aggressive marketing demands an equally aggressive response from our nation’s elected leaders. By granting the FDA authority over tobacco products, the Congress can crack down on the industry’s most harmful practices.”

According to a release from the Campaign for Tobacco Free Kids, US Rep. Henry Waxman (D-Calif) and US Senator Edward Kennedy (D-Mass) are expected to reintroduce legislation granting the FDA authority over tobacco products soon. If introduced, the legislation would:

•    Require larger health warnings on cigarette packs to better informing consumers and reduce the effectiveness of the cigarette pack itself as a marketing tool.