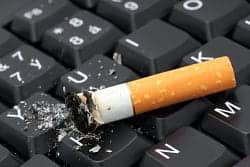 Collective financial incentives provided to teams of smoking co-workers who saw success in a cessation program, may assist smokers in quitting and remaining abstinent for 12 months, new data says. The program encompassed a team of 28 health care workers at St, Paul’s Hospital, Seoul, South Korea and its results were recently presented at the 11th Annual AACR International Conference on Frontiers in Cancer Prevention Research.

During the program, when participating smokers remained smoke-free, their team collectively received a financial inventive of 50,000 won, or about $45 per each successful participant at 1 week and 1 month. A longer abstinence period resulted in the team being awarded a collective incentive of 100,000 won, or $90 each for the success of the participant at 3 months and 6 months respectively. The data indicates that the team incentive encouraged emotional support from other team members while the encouragement of non-smoking co-workers resulted in additional pressure on smokers to succeed in the program.

Teams received money based on team effort rather than on individual effort, researchers add. Sang Haak Lee, MD, PhD, pulmonologist and professor of medicine at St. Paul’s Hospital and the Catholic University of Korea College of Medicine, and colleagues developed the yearlong cessation program. Lee notes that the results also indicate that abstinence rates at 3 months, 6 months, and 12 months were at 61%, 54%, and 50% respectively.

“We postulated that team-based intervention not only encouraged participants’ motivation to quit smoking within the workplace, but also potentiated maintenance to stay abstinent due to peer pressure and peer support,” Lee says. Lee adds that while a small pool of participants limited the study, its results may have the potential to be used elsewhere in order to develop workplace smoking cessation programs.