Researchers at Moffitt Cancer Center, located in Tampa, Fla, surveyed employees and patients about a ban on outdoor smoking at the cancer center, finding that 86% of non-smokers supported the ban, as did 20% of the employees who were smokers. In addition, 57% of patients who were smokers also favored the ban.

The study appears in the Journal of Public Health Management and Practice.

“Policies restricting indoor worksite tobacco use have become common over the last 10 years, but smoking bans have been expanding to include outdoor smoking, with hospitals leading the trend,” said Marina Unrod, PhD, lead author of the study and an applied research scientist in Moffitt’s Tobacco Research and Intervention Program. “Research on the effects of smoking bans on employees is scarce, however. Accordingly, we wanted to examine the impact of a campus wide outdoor smoking ban at Moffitt both before and after the ban was imposed.”

“Overall, our data revealed overwhelming support for the outdoor smoking ban by non-smoking employees and patients,” explained Unrod. “Although a majority of employee smokers opposed the ban, a significant proportion was interested in quitting, and 11 employees quit after the ban’s implementation.”

The researchers noted that nearly one-third of smokers were interested in services to help them quit. Moffitt offered free smoking cessation interventions that included group classes, educational reading materials, and nicotine replacement therapy, such as nicotine gum, patches and lozenges.

The researchers found that despite high interest in quitting and cessation services, few employees surveyed took advantage of the services offered.

Prior to the ban, smokers were concerned about negative effects of the ban in terms of their ability to concentrate and do their jobs, their interactions with others at work, and their mood. Sixty percent of smokers thought the ban would decrease their overall job satisfaction.

“Compared with the pre-ban expectations, a lower proportion of smokers experienced negative effects post-ban,” concluded the authors. “Our findings suggest a need for worksite cessation programs to capitalize on the window of opportunity created by tobacco bans while also addressing concerns about effects on work performance.”

According to Barry Asch, an administrator in radiation oncology and co-chairman of Moffitt’s Tobacco-Free Committee, “moving toward a tobacco-free campus at Moffitt supports the overall mission to contribute to the prevention and cure of cancer.”

“While there was resistance from some employees, most stood strong in supporting the beliefs and mission of the institution,” said Asch. “Ultimately, the people who wanted to quit smoking and those who understand the benefits of a smoke-free environment are grateful that we took the steps to make Moffitt’s outdoor environment healthier.” 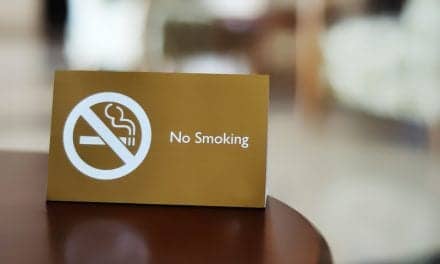