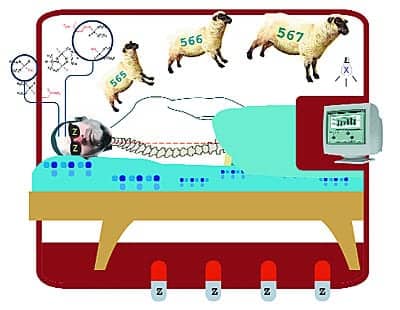 Once upon a time, sleep monitoring devices were bulky affairs that ate up much space. The same was true of the continuous positive air pressure (CPAP) devices used in treating some of the conditions detected by those monitors.

But that was then. This is now. Today, equipment on both the diagnostic and therapeutic sides of sleep medicine is relatively streamlined. The devices are destined to become even more so, for the big trend is to go small. Really small.

Already, monitors have shrunk to the point where they can be worn on the patient’s wrist or fingertip. And it will not be long before CPAP devices shed enough dimensional inches to start resembling diminutive bedroom radio alarm clocks rather than conventional hospital ventilators.

“Miniaturization is being driven by consumer demand,” says Ron F. Richard, senior vice president of strategic marketing initiatives at ResMed Corp in Poway, Calif. “Take CPAP, for instance. People who travel a lot, who have active lifestyles, want smaller equipment, equipment that goes anywhere. But also there are people who want equipment that’s less visible and that takes up less space on the tabletop next to their bed. In the coming years, the number of people who will need and want sleep medicine will grow, and the ranks of people who want portability of equipment and equipment that is unobtrusive will grow as well.”

How Low Can They Go?
Richard finds a parallel in the miniaturization track being taken by sleep medicine technology and that taken years ago by cell phones. “The first cell phone I owned was the size of an Army walkie-talkie, and it was very expensive to pay my first month’s bill: I thought I was going to have to mortgage my house to pay it,” he muses. “But, over time, cell phones kept getting smaller and cheaper, even as they became more powerful and feature-packed.”

Accordingly, Richard says he expects CPAP machines to get smaller, cheaper,  more powerful, and feature-packed in part because—not coincidentally—they have begun using many of the same electronic components employed in those smaller, cheaper, more powerful, and feature-packed cell phones. Consequently, there is little or no need for CPAP makers to invest huge sums in electronics research and development. Thus, Richard predicts, the journey from where we are today to where we could be in 5 years in terms of miniaturization will be potentially rather short and inexpensive.

Along the way to getting there, however, CPAP manufacturers could discover themselves locked in a heated competitive battle to see who can come out with the unit that carries the most bells and whistles at the most beguiling price, just as is the case today with cell phones. That could translate into a boom for CPAP sales.

Richard points out, though, that there is a lower limit for miniaturization, a point of compactness beyond which it is impractical to go. “If you make the device too small, patients will not be able to easily read the LCD display, and they will not be able to easily locate and work the controls, especially true in low-light situations,” he cautions. “Miniaturized equipment targeted to consumers must be easy to operate, since it will be utilized in unattended, nonclinical settings. On top of that, the size requirements for the power supply, motor, blower, and other mechanical components are such that a CPAP device can be made only so small to begin with.”

Also constraining the extent to which devices can be downsized is the noise factor: The tinier the chamber that houses the motor and blower, the louder the device itself becomes. “The goal,” Richard says, “is to have the device as quiet as possible so that it does not disrupt sleep as it operates.” Manufacturers could hold the noise of a miniaturized system to a minimum by using the same active noise-cancellation technology found in top-of-the-line headphones and in the most expensive automobiles, but doing so would significantly add to the price of the product and result in fewer customers, he contends.

“When the equipment becomes small enough, it only makes sense to complete the package by taking it wireless,” says Marco Mancini, national sales manager for Grass-Telefactor in West Warwick, RI. “The small size promises portability, but that’s a promise that truly can’t be fulfilled until you remove the wires.”

That sums up the thinking behind several wireless polysomnography systems offered by different manufacturers, including Grass-Telefactor. “Wireless [polysomnography] eliminates the need for hard-wire cabling through walls and ceilings, making it easier to put sleep beds into areas of hospitals where before it might not have been feasible,” Mancini says. “It also opens up more portable outpatient kinds of situations, which helps increase access to sleep medicine generally.”

Mancini says wireless makes life better for patients, clinicians, and even payors. “If the patients being sleep tested are tethered to a fixed amplifier unit, it is difficult for them to get out of bed in the middle of the night to go to the bathroom,” he says. “They  must summon the attending technologist to come into the room to disconnect the wires. Wireless solves that problem—for both the patients and the technologists.Patients can get up out of the bed without help, and the technologists do not have to stop what he or she is doing in the control room to assist the patient.”

Some wireless monitoring systems are designed to automatically pause recording when the patient arises from the bed and then automatically resume it once he returns and lies down again, Mancini adds.

Wireless in a laboratory setting also permits a more accurate picture of the patient’s sleep habits, Mancini believes. “At home, in their own beds, patients don’t have cables hooked up to them. If you have wireless monitoring, the absence of cables makes for a more natural sleep situation. As a result, the patient isn’t going to be lying awake half the night worrying about pulling on the cables, and won’t be made physically uncomfortable by them either, so the patient’s sleep is going to more closely resemble what normally transpires at home. And because of that, the lab will be able to generate a more accurate study. A more accurate study means less likelihood of having to retest in the hope of gathering more conclusive results.”

There is even a marketing advantage to wireless. Here again is Mancini: “People who are considering coming to a lab for a first-time sleep study but aren’t totally sold on the idea may find it more appealing if the lab talks up the benefits of its wireless monitoring capability—the promise of minimal discomfort, ability to get up from bed as needed without restriction, better accuracy of testing. There are so many labs popping up that one way you can differentiate yourself from the competition is to tout the impressive technology you’ve got available—and certainly, wireless qualifies as impressive technology that not everyone has.”

Wireless is helpful for home care dealers, too, who want to venture into sleep testing, says Richard, whose own company not long ago introduced a wireless monitor intended for home use that employs the same communications technology as a pager to permit the provider to poll on demand for accumulated patient data. “Patients may live a considerable distance from the provider’s location; wireless makes it very convenient for everyone,” he explains. “The data is sent the same way a cell phone call is, so the patient does not have to drive over to the provider to deliver the data-capture card or mail it, eliminating the risk that the card might be lost or damaged in transit.

“You also avoid any need to hook up a modem to the patient’s phone line. Modems aren’t always workable because, if the patient’s home is served by only one phone line, it may mean the patient will not be able to make or receive calls while the modem is in operation. If it’s an older home, there may not even be a directly accessible phone jack to plug the modem into.”

Payor Prodding
Wireless is also seen as advantageous because information collected at home is available almost immediately,  and quicker access to the data means that treatment can begin or be modified earlier, Richard suggests. “If a patient is having problems with compliance—a CPAP mask is leaking or the pressure isn’t quite correct, for example—these can be recognized right away thanks to the wireless delivery of data,” he says. “Clinical decisions to get the patient back on track will not be delayed. The end result will be a patient who is much more satisfied with the therapy. This will increase compliance and, more important, provide more efficient treatment—resulting in reduced health care expenses related to sleep disorders.”

Naturally, some sleep providers wonder whether the costs of converting to wireless are worth it, since wireless is inherently a more expensive choice than using hard-wired systems or systems that store captured data on a card. However, Richard thinks the economics nonetheless favor wireless. “Initially, there is a larger up-front equipment cost, but that can be offset by the increased productivity wireless makes possible by saving time and steps—staff can use those workflow savings to pursue additional income-generating activities,” he says.

At present, wireless technology is found among only about 5% of sleep medicine providers. But 5 years hence, wireless sleep diagnostic and therapy systems could be in a majority of sleep centers and home medical equipment companies as a standard of care, Richard speculates.

To an extent, the coming proliferation will no doubt be due to the declining price of wireless technology (assuming it follows the same trajectory of virtually every other innovation in electronics during the past three decades). But many laboratories and providers may also end up outfitting themselves with as much wireless gear as possible in response to payor prodding. Even now, the reimbursement picture encourages such a course of action.

“Currently, sleep providers can bill for reading data captured in the patient’s home that then is transmitted via a wireless system,” Richard says. “CPT codes have been developed for that type of read—suggested codes include 99090 and 99091. If the physician is specifically reviewing sleep data from the patient’s PAP device as a means of assessing their therapy needs or educational issues related to improving patient care, it is recommended to bill 94660. As always, check with payors to confirm coverage amounts before making any final coding decisions.”

Providers, he contends, will want to improve their data-collection capabilities (wireless being one key element of any such effort) because it plays well with referral sources, not just payors. “If you can do a better job harvesting and mining your data, you are in a stronger position to produce outcomes information—and that’s the future of sleep medicine, being able to show the world why you can do a better job with the patient than can the provider down the street. Outcomes-based medicine is of interest to payors as well as physicians. With the proper metrics in place, positive steps can be made in terms of developing efficient protocols to better manage patients suffering from chronic diseases such as sleep apnea.”

Richard calculates that if every American with a sleep disorder were to receive treatment, the health care system would save multiplied billions of dollars in utilization costs. “There would be fewer automobile accidents, for one, because people would not be falling asleep behind the wheel,” he says. “You’ll also have reduced incidence of stroke, heart attacks, diabetes, and other conditions linked to poor quality of sleep.” It is understandable, then, why manufacturers are jockeying to make sleep medicine equipment more useful and appealing by going wireless and shrinking the size. “These efforts clearly represent a boon to sleep medicine,” Richard says. 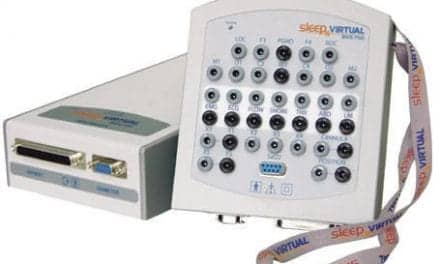