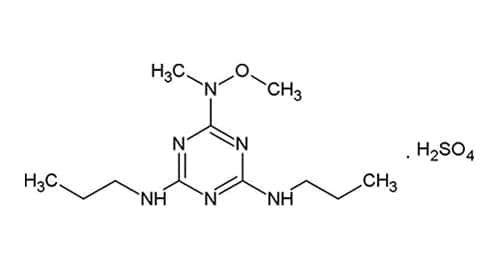 The chemical structure of GAL-021 dihydrosulfate.

People taking prescription opioids to treat moderate to severe pain may be able to breathe a little easier, literally. A study published in the September issue of Anesthesiology found that a new therapeutic drug, GAL-021, may reverse or prevent respiratory depression, or inadequate breathing, in patients taking opioid medication without compromising pain relief or increasing sedation.

“Although opioids such as oxycodone, methadone and fentanyl are commonly used to manage perioperative and postoperative pain, opioids are associated with an increased risk of adverse effects, the most serious being respiratory depression,” said Albert Dahan, MD, lead author and professor of anesthesiology at Leiden University Medical Center in the Netherlands. “Opioid-induced respiratory depression can lead to brain damage, cardiac arrest or death.”

Current drug treatments for opioid-induced respiratory depression (OIRD) include administering a drug such as naloxone that counteracts the effect of the opioid and/or decreasing opioid doses; however, both compromise pain relief. Conversely, GAL-021 is an intravenous respiratory stimulant that works by blocking certain potassium channels in the brain that regulate breathing. It has been previously reported that GAL-021 reverses respiratory depression in animals without diminishing opioid-related pain relief.

In the study, GAL-021 stimulated breathing in 12 healthy male volunteers who underwent opioid-induced respiratory depression, at which time their breathing capacity was decreased by 25 to 30%. All patients experienced an increase in respiratory rate and tidal volume, which is the amount of air that is expelled during a normal breath. Researchers also found that GAL-021 had no adverse affect on non-respiratory variables such as sedation, pain relief, blood flow or safety parameters.

“The development of potent painkillers that do not increase the risk of respiratory depression seems still far away,” said Dr. Dahan. “Using an add-on drug that reverses or prevents respiratory depression caused by opioid use, without affecting pain relief, is currently our best option to treat this condition. While our data suggest that GAL-021 is an attractive alternative to other respiratory stimulants, additional studies are needed to further confirm these findings.”

Potential Use of Google Glass in Surgical Settings