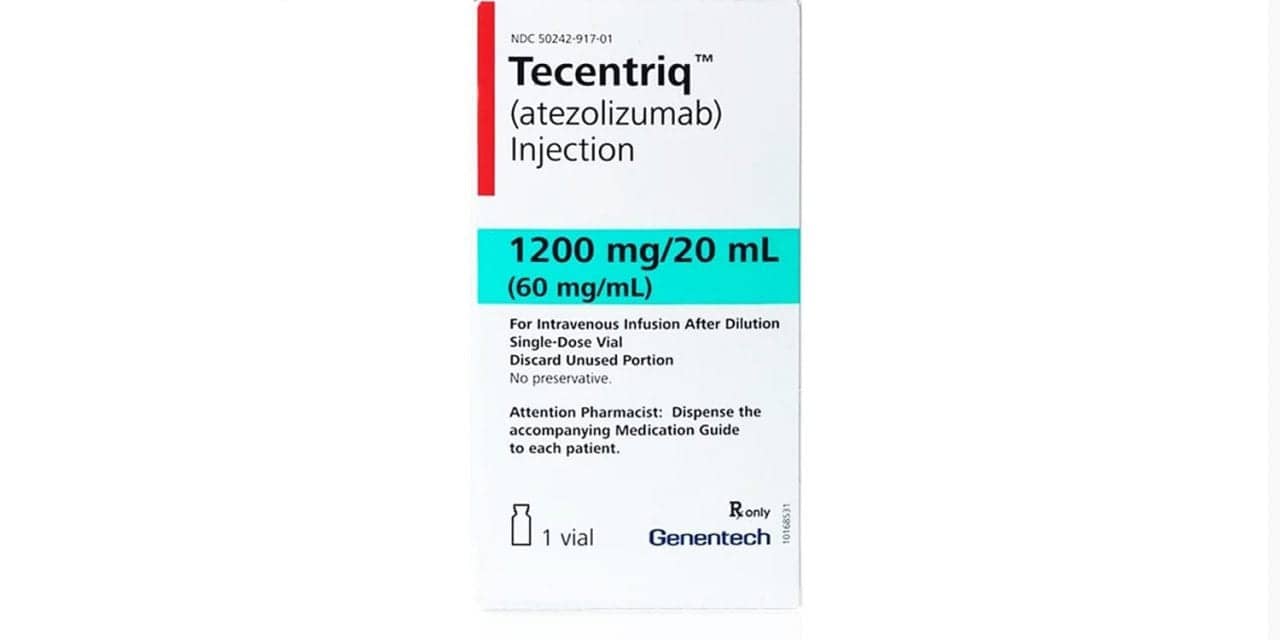 The FDA has approved atezolizumab (brand name Tecentriq, Genetech) as adjuvant treatment following surgery and platinum-based chemotherapy for adults with Stage II-IIIA non-small cell lung cancer (NSCLC) whose tumors express PD-L1≥1%, as determined by an FDA-approved test, according to the company.

Tecentriq is a monoclonal antibody designed to bind with PD-L1, a protein expressed on tumor cells and tumor-infiltrating immune cells, blocking its interactions with both PD-1 and B7.1 receptors.

The approval is based on results from an interim analysis of the Phase III IMpower010 study that showed treatment with Tecentriq following surgery and platinum-based chemotherapy reduced the risk of disease recurrence or death by 34% in people with Stage II-IIIA NSCLC whose tumors express PD-L1≥1%, compared with best supportive care. Safety data for Tecentriq were consistent with its known safety profile and no new safety signals were identified. Fatal and serious adverse reactions occurred in 1.8% and 18%, respectively, of patients receiving Tecentriq. The most frequent serious adverse reactions (>1%) were pneumonia (1.8%), pneumonitis (1.6%), and pyrexia (1.2%).

“Tecentriq is now the first and only cancer immunotherapy available for adjuvant treatment of NSCLC, introducing a new era where people diagnosed with early lung cancer may have the opportunity to receive immunotherapy to increase their chances for cure,” said Levi Garraway, MD, PhD, chief medical officer and head of Global Product Development. “Today’s landmark approval gives physicians and patients a new way to treat early lung cancer that has the potential to significantly reduce risk of cancer recurrence, after more than a decade with limited treatment advances in this setting.”

“Too many patients with early-stage lung cancer experience disease recurrence following surgery. Now, the availability of immunotherapy following surgery and chemotherapy offers many patients new hope and a powerful new tool to reduce their risk of cancer relapse,” said Bonnie Addario, Co-founder and Chair, GO2 Foundation for Lung Cancer. “With this approval, it is more important than ever to screen for lung cancer early and test for PD-L1 at diagnosis to help bring this advance to the people who can benefit.”

The review of this application was conducted under the FDA’s Project Orbis initiative, which provides a framework for concurrent submission and review of oncology medicines among international partners. According to the FDA, collaboration among international regulators may allow patients with cancer to receive earlier access to products in other countries where there may be significant delays in regulatory submissions. Simultaneous applications were submitted to regulators in the United States, Switzerland, the United Kingdom, Canada, Brazil and Australia under Project Orbis. Additionally, the FDA reviewed and approved the supplemental application under its Real-Time Oncology Review pilot program, which aims to explore a more efficient review process to ensure safe and effective treatments are available to patients as early as possible.

Tecentriq has previously shown clinically meaningful benefit in various types of lung cancer, with six currently approved indications in the U.S. In addition to becoming the first approved cancer immunotherapy for adjuvant NSCLC, Tecentriq was also the first approved cancer immunotherapy for front-line treatment of adults with extensive-stage small cell lung cancer (SCLC) in combination with carboplatin and etoposide (chemotherapy). Tecentriq also has four approved indications in advanced NSCLC as either a single agent or in combination with targeted therapies and/or chemotherapies. Tecentriq is available in three dosing options, providing the flexibility to choose administration every two, three or four weeks.