Pediatric researchers at the University of Alabama at Birmingham (UAB) have successfully modified an device for adults that can safely be used for low-concentration oxygen therapy in infants and small children. The modified device is intended to provide low-cost and low-maintenance oxygen therapy to children with pneumonia in developing countries. The research team describes the device in a paper published in the journal Pediatrics.

In some parts of Sub-Saharan Africa and Southeast Asia the death rate from pneumonia in children under 5 can be 10 times higher than in the United States.

“In the developed world, oxygen is delivered to these patients with devices that blend compressed oxygen and compressed air to provide accurate and precise concentrations and flow rates,” says Wally Carlo, MD, a neonatologist at UAB who worked on the device. “Use of these blenders in developing countries is hindered by multiple factors, including cost, maintenance, and lack of local availability of compressed air. These devices are expensive and somewhat complex, which further limits their use in developing countries.”

Using a commercially available device, the system developed at UAB allows the exact oxygen concentration to be delivered to a pediatric patient by pulling air from the environment.

The researchers tested a device in a laboratory setting to determine the necessary concentrations and flows of oxygen suitable for therapy for infants and small children using three oxygen delivery systems: a nasal cannula, oxygen hood, and oxygen mask.

The findings are important, says Carlo, because for the first time these experiments demonstrated that air-blending devices can accurately and precisely deliver set oxygen concentrations at flows lower than those for which they are nominally designed, but only if used with the proper delivery systems.

The research team is planning clinical trials to give oxygen to infants and children with pneumonia in an attempt to reduce mortality.

Source: University of Alabama at Birmingham 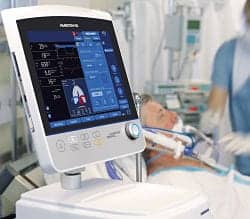