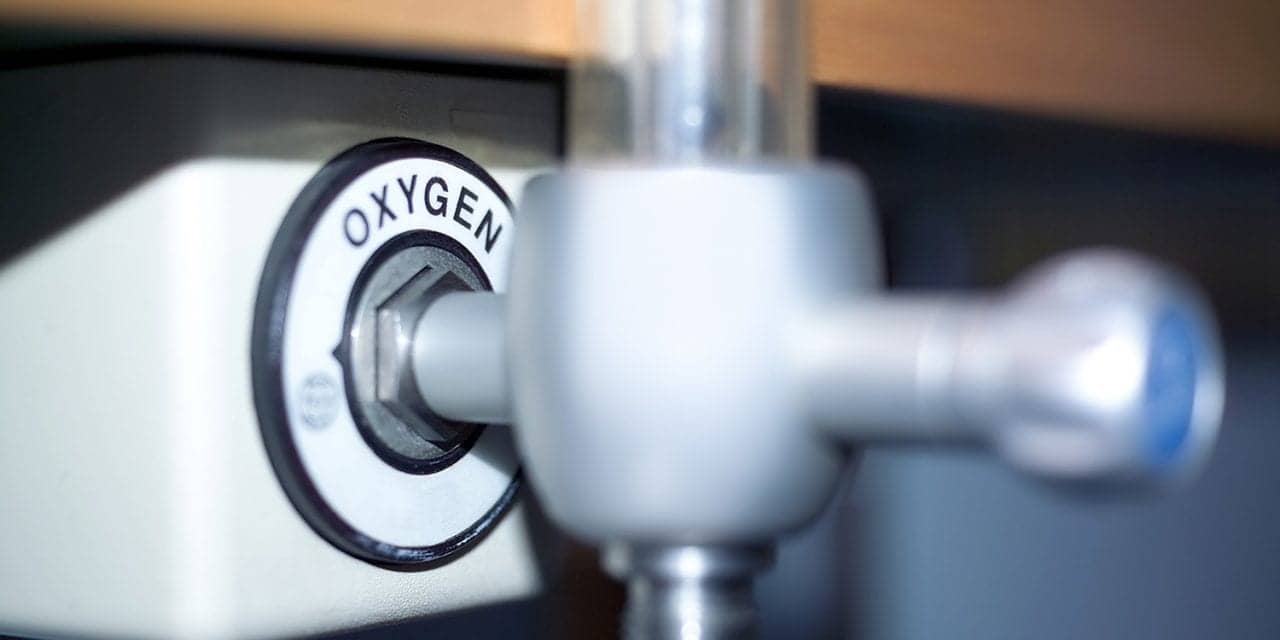 Patients with respiratory conditions require oxygen therapy to maintain tissue oxygenation and to reduce work of breathing. While oxygen delivery can be achieved with both low-flow or high-flow, HFO via high-flow nasal cannula is being used more and more.

Patients who present with chronic obstructive pulmonary disease (COPD), asthma, acute respiratory distress syndrome (ARDS) or some other respiratory-related disorder require oxygen therapy to stabilize their condition and prevent further deterioration. In recent years, pulmonary and respiratory specialists have strived to provide such support in the least invasive and most comfortable manner. In response to this goal, high-flow nasal cannula (HFNC) oxygen therapy has been used increasingly in several clinical settings, although more studies are needed to evaluate its effectiveness under varying circumstances.

According to a 2018 study, HFNC was initially developed for the neonatal population; the use of a tight face mask negatively affected blood flow to the skin resulting in pressure sores. As an alternative, cannulas that better fit the diameter of a neonate’s nasal openings were developed. Furthermore, these cannulas were made of softer materials to further reduce friction.1

The study also pointed out that HFNC devices offer other significant benefits over traditional oxygen delivery systems, including “… maintenance of a constant FiO2, generation of a positive end-expiratory pressure (PEEP), reduction of the anatomical dead space, improvement of mucociliary clearance and reduction in the work of breathing.”

Wide Spectrum Use of HFNC

Glen B. Chun, assistant professor, Division of Pulmonary, Critical Care and Sleep Medicine, Department of Medicine, Icahn School of Medicine at Mount Sinai, explained that although initially developed for neonates, HFNC devices have come into widespread use for adult patients. “Manufacturing companies of HFNC have created different sized nasal prongs to accommodate premature neonates to adults, with varying associated flow rates,” he said.

Additionally, HFNC is best used for respiratory failure patients who need more support, specifically FiO2 and flow, than nasal cannula can provide. However, Chun emphasized that HFNC should not be used as a substitute for intubation and mechanical ventilation.

For patients with respiratory failure who have a Do Not Resuscitate/Do Not Intubate directive (DNR/DNI) in place, HFNC can offer some support and relief without violating the patient’s order, Chun explained.

According to Chun, HFNC has multiple mechanisms of action that make it effective for patients with respiratory failure. “HFNC is able to provide high levels of both oxygen (up to 100% FiO2) and high levels of flow (up to 60 LPM),” he said. “The HFNC provides heated and humidified oxygen that can decrease airway inflammation, decrease airway resistance and maintain mucociliary function for secretion clearance.”

Multiple studies have been conducted that demonstrate the clinical benefits of HFNC, according to Chun. “Most notable is the study in the New England Journal, the FLORALI study2 from 2015, that showed a significant decrease in 90-day mortality for patients on HFNC (12%) with acute hypoxemic, not hypercarbic, respiratory failure compared to the standard oxygen therapy (23%) or noninvasive ventilation (28%),” he said. However, he pointed out that the FLORALI study did not show a significant difference in intubation rates overall. “But the patients with more severe hypoxemia (P:F ratio 3 and determined that HFNC is a good option during post-extubation. “Studies have shown a reduction of re-intubation of patients extubated to HFNC rather than to standard oxygen,” he said.

In spite of several benefits though, HFNC may lead to delay in intubation, subjecting the patient to unnecessary risk. “Early intubated patients had better overall ICU mortality, extubation success, ventilator weaning and more ventilator-free days than late intubated patients,” according to the Lu meta-analysis, which also found no benefit in using HFNC for cardiac patients.3

In 2018, Baystate Medical Center, a community teaching hospital in Springfield, Massachusetts, conducted a study that examined the use of HFNC in the facility and found that utilization had increased steadily between 2008 and 2014 in its adult patients.4 The findings indicated that use of HFNC more than doubled, while noninvasive ventilation (NIV) and invasive mechanical ventilation (IMV) rates increased only modestly.

According to lead author, Mihaela S. Stefan, MD, PhD, the most common diagnoses for which HFNC is indicated are pneumonia and congestive heart failure (CHF). However, despite limited evidence, in 20 percent of admissions where HFNC was used patients were diagnosed with COPD or asthma exacerbation.

The authors attributed the increased use of HFNC at Baystate Medical Center to findings in other studies that showed improved oxygenation in patients with hypoxia. Stefan noted that, in spite of a dearth of evidence, the hospital had several reasons for employing HFNC. “In fact, the respiratory therapists were promoting [HFNC] because it is better tolerated by the patient and the work of setting it up and monitoring it is less [time intensive]. Also, the nurses accepted it more readily.”

While high-flow oxygen delivery has been shown to benefit patients, when coupled with humidification, HFNC has demonstrated even higher levels of comfort to the patient and improved outcomes.

A 2019 study5 suggested that if inspired oxygen is warmed and heated to core temperature it is more effective when delivered at a high-flow rate, typically more than 40 LPM, than at low-flow rates. The findings indicate that “…HFNC is better at heating and humidifying inspired oxygen than conventional high-flow systems such as Venturi masks or nonrebreathers (flow rate typically 10 to 15 LPM) or low-flow systems (flow rates typically <10 LPM).”

By increasing humidification, the water content in mucous is increased, facilitating secretion removal. Patients may experience decreased work of breathing when they receive humidified and heated oxygen; this delivery method may also avoid airway desiccation and epithelial injury, according to the study.

Products such as the Hudson RCI Comfort Flo Plus HFNCT Cannula from Teleflex is capable of delivering heated and humidified gas between 1 and 60 LPM, which maximizes patient comfort and enhances compliance with therapy.

Additionally, a device that combines oxygen delivery with humidification streamlines workflow for the clinician. For instance, the Hudson RCI Neptune Heated Humidifier from Teleflex, in combination with ConchaSmart Technology, features an Auto Settings mode “…that allows users to pre-set and lock the desired temperature and gradient allowing for invasive and non-invasive ventilation.” Since the mode is adjustable, clinicians can also customize the humidification level according to patient need.

Furthermore, an “intuitive display” provides important clinical patient data and alerts the clinician when water levels are low or if some other issue should arise.

Although the use of HFNC has increased significantly in the last 10+ years, some medical facilities have found an alternate therapy to be a viable option. Marc Frechette, marketing manager for Vapotherm, reported that high velocity nasal insufflation (HVNI), which is rooted in HFNC, has been on the market since 2001. The system is used in more than 1,000 hospitals and for nearly 2 million patients worldwide, as of June 2019, he added.

Mike McQueen, MD, MBA, vice president of medical affairs for Vapotherm, compared HNVI’s delivery system to that of a garden hose. “If you turn on the garden hose full blast and put your thumb over the end of the hose, it doesn’t change the flow but turns it into a high velocity system by turning the water stream into jet stream,” he said. “Additionally, HVNI is engineered to withstand back pressure. When you put your thumb over the hose, it doesn’t build up downstream. It builds up within the hose.”

McQueen explained that the device delivers a range from 1 LPM to 40 LPM. “The more flow you generate through the narrow nasal cannula, the more velocity you generate. This is relevant in terms of the mechanism of action,” he said.

In some ways, HVNI is similar to HFNC in that it uses a nonocclusive interface with smaller nasal prongs, has an effective humidification system and is user friendly. However, HVNI does not generate tidal volume and does not breathe for the patient. HVNI is indicated for use in spontaneously breathing patients.

McQueen reported that the FDA gave HVNI its own unique product code based on its mechanism of action and clinical trial data that differentiates the high velocity mechanism from high flow.

Clinical trials have evaluated HVNI in noninvasive ventilation (NIV) and found it to be effective as other forms of non-intubated NIV. In a head-to-head study, HVNI was determined to be noninferior to BiPAP, the gold standard for NIV for respiratory distress in the emergency room, McQueen pointed out.6

While HVNI is used for the same diagnoses as HFNC, emergency department physicians might use the technique during pre-oxygenation as it washes out CO2, and may allow clinicians more time to perform an intubation procedure, according to McQueen.