Pradaxa Approved for Treatment of Pulmonary Embolism and DVT 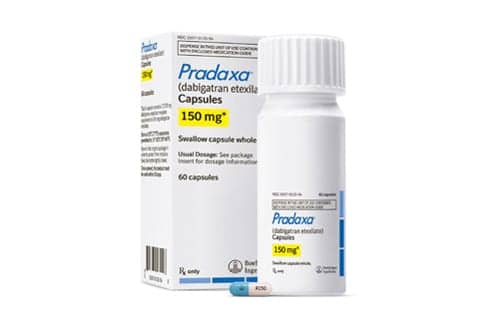 The FDA has approved Pradaxa (dabigatran etexilate mesylate) for the treatment of deep vein thrombosis (DVT) and pulmonary embolism (PE) in patients who have been treated with a parenteral anticoagulant for five to 10 days, according to manufacturer Boehringer Ingelheim Pharmaceuticals Inc.

The FDA also approved the drug to reduce the risk of recurrent DVT and PE – which are collectively referred to as venous thromboembolism (VTE) – in patients who have been previously treated.

A DVT occurs when a blood clot blocks the normal flow of blood through a vein, usually in the leg or pelvis, which may lead to swelling or pain in the affected leg. A PE occurs when a DVT, or part of it, breaks off and travels through the bloodstream to the lungs, blocking a vessel.

There are an estimated 900,000 DVT and PE events per year in the US, approximately one-third of which result in death from PE.

“Venous thromboembolism is the third most common cardiovascular disease after myocardial infarction and stroke. About one-third of patients with a DVT or PE will suffer a recurrence within 10 years,” said Samuel Z. Goldhaber, MD, Director of Brigham and Women’s Hospital’s Thrombosis Research Group and Professor of Medicine, Harvard Medical School.

The FDA approval is based on 3 global Phase III studies that found Pradaxa to be non-inferior to warfarin in reduction of DVT and PE recurrence, as well as a fourth trial that found Pradaxa reduced the risk of recurrence by 92 percent compared to placebo, according to the company.

The standard of care for patients with a DVT or PE has been acute treatment with parenteral anticoagulation therapy, such as low-molecular-weight heparin, followed by long-term treatment with an oral vitamin K antagonist, such as warfarin, according to BI.