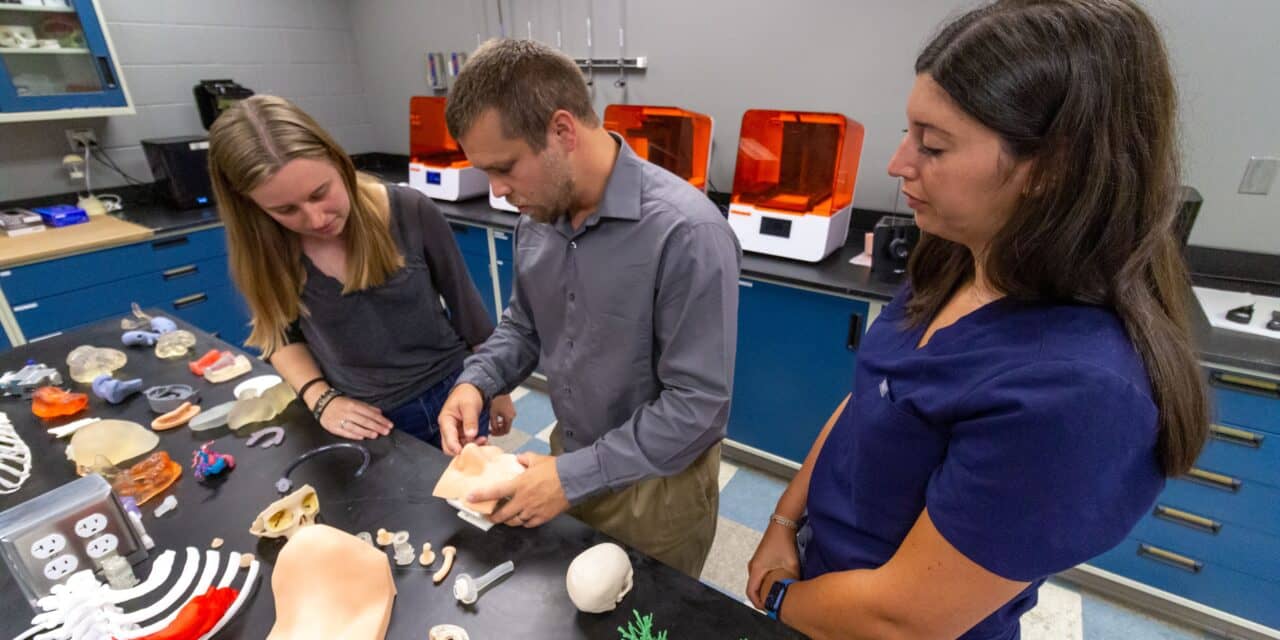 Medical centers across the country are investing in 3D printers as educational tools for their simulation labs, where healthcare providers are learning how to manage the most complex cases via 3D-printed synthetic airway models.


Airway manikins that are used to train healthcare personnel are often crude, overly simplified renditions of the human anatomy, and in many cases, manikins just can’t replicate the experience of working with the real thing. Now, there is what many medical instructors are reporting is an attractive alternative: 3D printed models.

Over the last decade, medical centers have started investing in 3D printers for their simulation labs, centers where clinicians and medical trainees gain hands-on experience in an immersive environment without risking harm to the patients.

“I think it has huge educational value for our learners,” said otolaryngologist surgeon Kyle VanKoevering, MD, an assistant professor in the Department of Otolaryngology at Ohio State University.

3D printers have found their way into medical centers, changed the way medical school curriculums are designed, and transformed how many providers learn about complex airway emergencies. The technology can now generate realistic, multicolored, replicas of nearly any part of the human body by using CAT scans and MRIs. After a scan is uploaded to the system, instructors and clinicians can then select segments of the anatomy to print. These models enable medical trainees to better understand complicated respiratory cases before even seeing the patient whose airway might have been scanned to create the replica.

“What we have been able to do is fuse our 3D printing knowledge with some techniques that are used in Hollywood and develop high-fidelity models that look very anatomically accurate, feel anatomically accurate, and perform close to real-life situations. And we are able to do that at a relatively low cost,” explained David Zopf, MD, an assistant professor of pediatric otolaryngology and an affiliate professor of biomedical engineering at the University of Michigan.

The University of Michigan and Ohio State University are just a few examples of institutions that have seen the potential of 3D printing and have found innovative ways to improve clinical outcomes with the help of 3D-printed models.

Instructors and clinicians at the University of Michigan currently have access to about a dozen 3D printers. The technology is used to help surgeons plan for airway reconstructive surgery in complicated cases. And they have even helped other medical centers prepare for surgery by printing models for them.

Michigan medical students also practice on 3D printed models. Specifically, trainees practice the removal of foreign bodies from models of infant and neonatal airways, an occurrence seen in emergency rooms in which a small child aspirates an object into their lungs. Surgeons-in-training can also rehearse the process of harvesting cartilage from one part of the body and sculpting it to reconstruct an airway — a routine procedure in airway reconstruction, said Zopf.

“We use simulators that allow surgeons-in-training the experience of carving simulation cartilage, so that they have that skill of sculpting pieces of cartilage in airway reconstruction, and they can build that skill outside of the operating room, so that there is zero risk,” he said.

Overall, instructors who use 3D printers are finding that the technology is an easy-to-use training solution instead of manikins or cadavers. Also, as 3D printing in airway management becomes more common, research continues to emerge on its benefits. A case report in the New England Journal of Medicine reports success in the use of 3D printing to practice the placement of a 3D-printed airway splint in a small child with tracheobronchomalacia.1

Another paper describes the implantation of 3D-printed external airway splints in infants with tracheobronchomalacia.2 A third report demonstrates the impact of 3D printing on surgical planning in children who underwent open airway surgery.3

And at Ohio State University’s M4 Lab, medical students are learning about the intricacies of nasal anatomy from 3D-printed models—a simulation that allows them to prepare for encountering a nosebleed in the emergency room. “Using the simulator really allowed the learners, most of whom had never seen the inside of a nasal airway up close, to take a telescope and drive it up there with no risk of injuring anything and look all around at all the corners,” said VanKoevering, who is also director of Ohio State University’s Medical, Modeling, Materials and Manufacturing (M4) Lab.

By working with the 3D-printed nosebleed simulator, learners at Ohio State have a chance to practice putting packs in the nose or cauterizing the inside of the nasal cavity in a low-stakes environment. The instructors guide them to the locations inside the nose where nosebleeds typically originate and explain different methods to manage the bleeding, which can depend on the location of the bleed.

Created to mimic the feel and resistance of the inside of a living human nose, the 3D-printed nasal simulator is flexible, made with a blend of silicones and synthetic elastic, and is easy to move around. There is even synthetic blood that is pushed out of the 3D-printed nose replica: a blend of water, dye, and additives that give it the correct viscosity. The only noticeable difference between the real thing and the model, VanKoevering, explains is the replica’s inability to swell and contract as a living human nose would.

“Visually, it is very realistic. We have the anatomy captured very well,” he said. Another bonus is that when developing simulators, biomedical engineers don’t have to jump through the same hoops that they do when creating medical devices, so progress is more immediate. “The nice thing is you can readily impact clinical medicine pretty immediately,” said Zopf.

In many cases, healthcare providers will never receive adequate simulation training on the anatomy of laryngectomies or tracheostomies before encountering these altered airways in their patients. And if there isn’t a medical professional available with adequate training on how to properly administer ventilation in a trach or laryngectomy patient, the consequences can be fatal. To help bridge what medical instructors viewed as a gap in medical school education, Ohio State instructors created 3D-printed simulators for laryngectomies and tracheostomies to prepare medical students for how to react when they encounter such cases in the field. The idea for these simulators was inspired by some of VanKoevering’s patients. One patient, an individual with a trach, was recovering from surgery in a rehab facility when the patient’s blood oxygen levels began to plummet during a pulmonary event. The medical personnel, who had no experience working with tracheostomy tubes, hesitated. The patient ended up passing away. “That was when I realized there was this fear and stigma of the trach that prevented anybody from just opening up the trach and starting to bag ventilate them through the trach,” VanKoevering said.

In another case, one of VanKoevering’s patients with a laryngectomy come down with pneumonia and began experiencing respiratory distress. The responding clinicians tried to ventilate the patient through the mouth and put an endotracheal tube in but, of course, VanKoevering said, it didn’t connect to the lungs anymore. Unaware that patients with laryngectomies can only be ventilated through a hole in the person’s neck, the clinicians responded incorrectly, and the patient died. “The fear around trachs and laryngectomies and these altered airway situations really hinders the ability of patients to be cared for, especially when they get to maybe smaller hospitals or rehab centers or somewhere that is not a tertiary medical center,” he said.

Seeing a need for more training in altered airways, VanKoevering and his colleagues began to brainstorm and decided to create a training program at Ohio State to help medical students learn about trachs and laryngectomies using 3D-printed models. There, in the simulation lab, they can learn to handle and understand the anatomy of laryngectomies and tracheostomies.

These are just a few examples of how 3D-printed models are helping trainees learn about the most complicated airways. And the technology is primed to only get better, VanKoevering said. “The technology has really evolved dramatically over the last 10 years. We have so many different high-resolution capabilities that allow us to really do almost anything needed within the medical space,” he said.

The applications of 3D printing in medicine are broad, stretching far beyond simulation labs. Clinicians have already started using 3D printed medical devices, including airway stents. Customized prosthetics are also being created with 3D printers. Some labs have even started working with printing living tissue that could be implanted in the human body. In the future, maybe one day we could even see 3D-printed lungs.

Getting the Real Story