Blood gases are the most common test done on neonates, according to Brad S. Karon, MD, PhD, director of point-of-care testing (POCT) for the Mayo Clinic in Rochester, Minn. The resulting information is clinically valuable and can enable rapid intervention in unstable patients. But neonates present special challenges compared to adults, in particular those associated with continuous blood draws. For these reasons, each facility needs to properly evaluate which methodologies provide the best options for its patient population and workflow.

“It’s now, with multiple methodologies available to the clinicians and respiratory therapists, that picking the most appropriate method is a pertinent question that we didn’t have to consider previously,” says James H. Nichols, PhD, DABCC, FACB, professor of pathology at Tufts University School of Medicine in Boston and medical director of clinical chemistry for Baystate Health in Springfield, Mass.

The options include not only different laboratory analyzers but also point-of-care testing equipment. “In the past, many times you only had the option of drawing a specimen, sending it away, and waiting for the result to come back. Now, we have the capability to draw a smaller sample and do the test right at the bedside. But that comes with some limitations,” Nichols says.

Point-of-care testing offers advantages in terms of turnaround, blood volume, and sample integrity, but the central laboratory brings cost and testing benefits that may outweigh those delivered with bedside tests. “So now you have these questions, and you have to help the physician understand when it’s appropriate to order a point-of-care test and when it’s not,” Nichols says.

The best way to arrive at the right conclusion is to collect facility-specific data. Karon suggests collecting information to answer questions such as: What are the test ordering patterns of the providers? What are the needs regarding turnaround? How much time will really be saved? If you use POCT, will other laboratory draws be eliminated and therefore save blood volume? What would be the impact on the practice or department? How many tests can you provide with a small blood volume in the most reliable and efficient manner? What percent of tests can be satisfied through other methodologies?

Infrastructure will impact some of these answers. “Every environment is different. What are the options?” asks Karon. Where is the laboratory in relation to the NICU, PICU, and other pediatric units? Does the facility have satellite laboratories? What form of transport is used?

The methodologies themselves will also influence the POCT/central lab blood gas testing strategy. It is therefore important that respiratory therapists and other clinicians understand how each method works and how the result will be utilized, particularly if there is a chance of interference from a drug, metabolite, or physiological cause. This means keeping up with the device’s latest data and package inserts.

“It’s not just that the analyzer comes onto the market and never changes. The more people use a particular method, the more we learn about its good parts and its bad parts,” Nichols says.

One of the advantages to the point-of-care test is most often the turnaround. Point-of-care testing typically provides results in less than 5 minutes—often in less than 2. This is a huge bonus if results do not get back from the central laboratory within 20 minutes; less so when the system turnaround is closer to 8 or 10 minutes.

For critical patients, however, every minute counts, and in these instances the quicker turnaround is clinically necessary. “It can be useful when there are clinical protocols or decisions that will actually be made based on the results in real time,” Karon says.

These quick decisions could impact a patient’s outcome. When the result is not as critical, it may be worthwhile to send the sample to the central laboratory. Point-of-care tests can be more costly and are often limited in their testing menus. For this reason, they should be employed wisely.

“We found out about 40% of the tests that were ordered were standing orders. If you know that far in advance you need this potassium, why order it by the point-of-care method, which is much more costly and when you’re not necessarily at the patient’s bedside to actually treat them immediately based on those test results?” Nichols asks.

To limit physicians using POCT for the sake of convenience, both the Mayo Clinic and Baystate Health limit its use to emergent need. “The vast majority of our volume [of blood gas] testing is done in a blood gas lab, and we use the point-of-care to supplement that in transport, codes, and critically ill patients,” Karon says.

Routine tests are, therefore, often best treated as routine tests. In other cases, however, routine testing poses a problem volume-wise. “A patient with a very low hematocrit would be dangerous to repeatedly stick,” Nichols notes.

The amount of blood that can be collected from a newborn is also somewhat limited due to their small size, yet sick neonates often require multiple tests. “The most critical of critical patients may get 10 or 12 blood tests a day, so you want the smallest amount of sample. But the instrumentation still requires a fairly large amount—three, four, five drops of blood,” Nichols says.

Collection technique then becomes a big issue. “You generally don’t do arterial sticks on neonates. You’re typically doing heel sticks, or you may use capillary blood from some of these children,” Nichols says. Samples can also be drawn from indwelling catheters.

These options are not foolproof, however. Clotting and contamination are always concerns. It’s difficult to mix anticoagulant in very small amounts of blood, so heel stick containers and glass capillaries present a higher risk of clots. Being able to place the sample immediately on a point-of-care instrument gives the sample less time to coagulate and can help to ensure its integrity.

Collections through indwelling catheters run a particular risk of contamination, but prescribed drugs, special nutrition, and even air bubbles can also throw off a result. Karon illustrates with an example of glucose contamination: “There is usually going to be glucose infused either during or around the time that you’re collecting the sample. This, combined with a draw from an indwelling catheter and a small volume, makes it really challenging to avoid glucose contamination.” Contamination can skew results. “If you’ve contaminated the sample, it can affect a lot of different things. There could be dilutional effects with your electrolytes or lesser effects on your actual blood gas,” Karon warns.

Clinicians and laboratorians must remain alert to results that don’t seem to match the clinical situation. When this occurs, the sample should be evaluated for contamination or clotting. “Respiratory therapists need to be cognizant of the need in the neonate population to minimize blood volume and of the higher likelihood of contamination because of the minimal volume and usual line collection,” Karon says.

Best practices should be designed, therefore, to minimize collection and detect contamination. “In an adult population, when we suspect contamination, we will generally reject that sample, not report any results, and ask for a recollection,” Karon says. In the pediatric population, however, the decision to redraw is more carefully considered.

Pediatric patients have their own flags and parameters, different from adults, which influence whether a sample is rejected or reported with a comment. “It’s our responsibility to make sure the clinicians are aware of those limitations and we interpret the results appropriately,” Nichols concurs.

Each facility must determine testing and reporting parameters based on its methodologies, clinical protocols, and patient populations. Neonates will have different critical ranges than adults and their collection will be more guarded, but it is also important to remember there can be similar differences between the various blood gas analysis systems. “This can lead to CO2 differences or bicarb differences of 1 or 2, which can throw people off, especially when you’re at a level of 20, 24, or 25 bicarb,” Nichols says.

To be aware of any differences, it’s wise to run regular crosschecks between the different methodologies and keep them distinct on result reports. “If you’ve got point-of-care and central laboratory blood gases in the same institution, don’t overlay them in an electronic medical record in the same row and call them by the same name—give them different names,” Nichols advises. Physicians should be able to compare “apples to apples” to be sure they are getting an accurate clinical picture.

Generally, however, the POCT and central laboratory technologies compare well—”many companies use the same biosensors or sensor technologies between the two,” Nichols says. There can be slight differences in precision and accuracy, with central laboratory instrumentation tending to perform better, but Karon notes that often the clinician arrives at the same clinical decision.

When blood is at a premium, however, it may be in the better interest of the patient to make a sample go as far as possible. Conventional blood gas equipment does not require as much blood as a traditional plasma- or serum-based chemistry analyzer and so may not need that much more blood than a point-of-care test.

“We can actually do more tests with the same volume of blood in the central lab than we could using a point-of-care application. So with 200 or 300 milliliters, we can give them a lot of information from a conventional blood gas analyzer,” Karon says.

The ability to run more tests on one sample brings the added benefit of cost efficiency, an issue that does not outweigh patient care but must also be addressed, particularly in today’s economy and with the current attempt at health care reform. Central laboratory testing is generally less expensive than POCT; Nichols estimates point-of-care testing costs 10 times as much as its main laboratory counterpart.

Once again, a facility-specific strategy will ensure the best outcome. “If you were in a practice where there was a blood gas lab set up only for the NICU, and all the equipment and all the staff were going to be eliminated in favor of a point-of-care application, your economics would probably come out pretty well. If you had no impact on the number of lab staff and were just adding point of care, it would probably come out very poorly,” Karon suggests.

Referring to the National Academy of Clinical Biochemistry (NACB) guidelines, Evidence-Based Practice for Point-of-Care Testing (released in 2007), Karon agrees with the organization’s conclusion that there is inconclusive evidence regarding the economic impact of point-of-care testing. “It’s probably highly dependent or variable between institutions, but the data simply isn’t there to determine how cost-effective the practice is overall,” Karon suggests.

Again, each facility should collect and analyze its own data to implement a strategy. When Baystate Health discovered that 40% of its POCT were ordered as routine or standing tests, it eliminated the ability to order advance point-of-care tests. “By removing that ability from our electronic ordering system, we actually experienced a cost savings of almost 40%,” Nichols says.

Yet, because the facility’s strategy includes appropriate use of POCT, patient care has not suffered. The administration worked with the clinicians to develop guidelines addressing appropriate use, providing scenarios and bullet points. “It comes down to an issue of when it is appropriate to do the blood gas at the patient’s bedside and when can you actually wait a little longer and send that to the main laboratory,” Nichols says.

Nichols suggests that such a simple revision to POCT strategy can help hospitals save “hundreds of thousands of dollars,” and that respiratory therapists, with their knowledge of the methodologies, can help to arrive at a smart point-of-care testing strategy that benefits patients without breaking the bank—or one with all the “right stuff.” 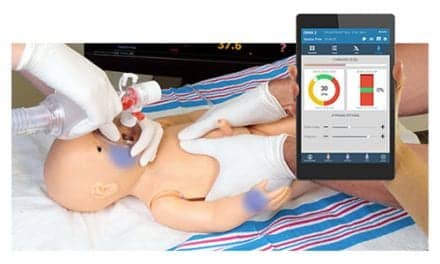