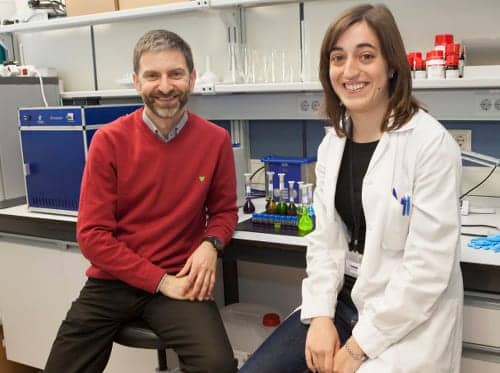 A new compound developed by to researchers from the Universitat Jaume I (UJI) in Castelló, Spain, allows for the detection of nitric oxide by fluorescence, according to a study that was recently published in the journal Chemical Communications. Nitric oxide is a molecule involved in cardiovascular, neurological, and immune system processes.

The detection of certain chemical compounds in our body is essential to prevent diseases, as well as countless cardiovascular, neurological, and immune system processes. As a result, making advances in the development of compounds that can be easily detected is key for the development of medicine to treat these conditions, researchers say.

The new compounds discovered by investigators can detect the presence of nitric oxide by way of fluorescence. These compounds have the advantage of being highly selective because they do not interact with other typical substances that can be found in the biological environment.

Researchers with the study say this progress can be useful to the medical and pharmaceutical industry because nitric oxide is involved in several cellular biochemical processes. For this reason, it is related to pathologies associated with them, such as cancer, Alzheimer, Parkinson, and immune disorders.

“The detection of nitric oxide is essential to understand countless biochemical processes; there are many pathologies associated with this molecule that could be potentially detected if we knew a detailed knowledge of its levels,” said Francisco Galindo, director of the project developed by the Spanish Ministry of Education, which financed the research.

The developed molecules are obtained by a simple procedure that allows synthesising a large amount of product in a few steps and economically; it is made from commercially accessible products. “Besides, they are highly versatile, which is important when selecting the accurate molecule regarding the excitation source available, either laser or another light source,” Galindo noted.

Once the laboratory phase for synthesising and characterising these compounds is over, the research group is seeking industrial partners to transfer molecules for its commercial exploitation or to work together with them for researching and developing applications.

“For instance, as a following step, it will be relevant to manage previous tests at the cellular level to check the potential diagnosis of the new probes,” Galindo said. “Given the simplicity of the synthesis of the products and, especially, their minimum amount required for their application, the production could be done in a very short term by any company already established in the chemical sensor field.”

The current results will be part of Alicia Beltrán’s doctoral thesis, who currently holds a pre-doctoral scholarship of the Spanish Ministry of Education in the Department of Inorganic Chemistry at the UJI.

Treatment for IPF May Pose Risk for Patients