Spirometry: Beyond the Blow 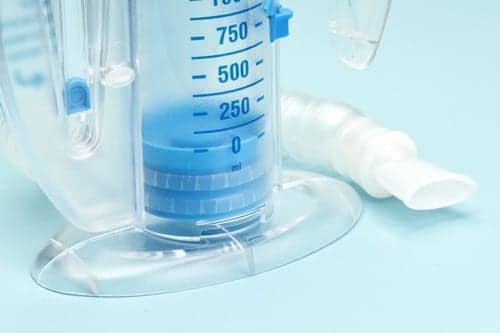 In addition to the standard of care using spirometry, we are also seeing other measurements (such as CT scan, FeNO, and FOT/IOS) added to the evaluation and helping boost the confidence in diagnosis and management of lung diseases.

Spirometry continues to be a mainstay in the evaluation of patients who have suspected lung problems, especially with two major populations that we care for daily: those with COPD and with asthma. According to the 2017 update for the Global Initiative for Chronic Obstructive Pulmonary Disease (referred to in this article as the GOLD guidelines), “Spirometry is required to make the diagnosis; the presence of a post-bronchodilator FEV1/FVC < 0.70 confirms the presence of persistent airflow limitation.”1 Likewise, the most recent published guidelines from the National Asthma Education and Prevention Program (NAEPP) also makes spirometry a key measurement, saying that; “Spirometry is needed to establish a diagnosis of asthma.”2

However, we still see many cases where spirometry should have been part of the assessment but it has not been performed. In addition to the standard of care using spirometry, we are also seeing other measurements (such as CT scan, FeNO, and FOT/IOS) added to the evaluation and helping boost the confidence in diagnosis and management of lung diseases. This article will look at these tools and explore their benefits.

Why Is Spirometry Important?

Airflow limitation is a constant and progressive problem in COPD. Symptoms for COPD include chronic cough, sputum production, and shortness of breath. Wheezing and risk factors such as exposure to tobacco smoke, occupational exposures, and indoor/outdoor air pollution are included when considering a diagnosis of COPD. With all patients who have symptoms and risk factors, the GOLD guidelines are clear that the diagnosis for COPD must include spirometry.1

Asthma patients tend to have intermittent issues with airflow limitation and in between attacks they may have little or no breathing problems. Similar to COPD, asthma symptoms include wheezing, shortness of breath, and cough plus complaints of chest tightness but these symptoms may arise then subside which makes diagnosis more difficult. In addition, some patients with asthma may have poor perception of their symptoms so the subjective assessment and other clues of this disease may not reveal any problems. Airflow limitation in asthma is found when the pre-bronchodilator FEV1/FVC and the FEV1 percentage of predicted shows reduction (and in children measurement of the FEV1/FVC has been recommended to classifying severity.)2 Asthma is more difficult to diagnose due to the intermittent nature of the symptoms. Reversible airflow obstruction, where the pre/post measurements show a 12% increase and a 200 ml increase in either FEV1 or FVC, is considered a significant response to a bronchodilator. This is a finding that supports the asthma diagnosis.3 Moreover, when asthma is suspected due to symptoms but initial spirometry shows no airflow obstruction, use of a bronchial challenge such as methacholine, exercise, or cold air combined with spirometry may uncover hyperresponsive airways and help support (or if the challenge is negative, may help rule-out) the diagnosis asthma.

In a recent publication of JAMA, Canadian researchers described a study where 613 adult patients who had a diagnosis of asthma were assessed by home peak flow monitoring, spirometry, and serial bronchial challenge testing. Of the 613 patients, 86.6% reported recently using asthma medication and 44.5% were using daily control medications (inhaled corticosteroids and/or antileukotrienes). Over 33% of the patients (203 of 613) had the asthma diagnosis ruled out. Of those who had asthma ruled out, only 43.8% had an assessment of airflow limitation (by spirometry, bronchial challenge testing, or serial measurements of peak flows) when they were initially diagnosed. On the other hand, for those who had a confirmed diagnosis of asthma during the study, 55.6% had been tested for airflow limitation.4

In a study published in Chest in 2015, researchers collected spirometry measurements for patients in the Pacific Northwest Department of Veterans Affairs medical centers who had been treated for COPD based on a presumed empirical diagnosis (a diagnosis based on observation and previous experience) and who were classified as having COPD in the ICD-9 code for COPD (ICD-9 is the International Classification of Disease, 9th revision). Of some 3,209 patients being treated for COPD between 2003 and 2007 it was found that 62% had AFO. Treatment included prescriptions for inhaled short-acting beta agonist or muscarinic antagonist, inhaled long-acting beta agonists, and inhaled corticosteroids. As the authors state: “The current study is consistent with previous studies that suggested providers diagnose COPD and make treatment decisions based on history and clinical examination despite guideline recommendations to diagnose COPD with spirometry.” Later they write: “Treating patients who do not have AFO with inhaled medications may not only result in delays in diagnosis and treatment of the true etiology of dyspnea but also expose patients to the risk of adverse medication effects.”5

Bottom-line, spirometry is recognized as the most commonly used objective measure to uncover and monitor airflow limitation and its use is included as a key objective measurement in the evidence-based guidelines for both the COPD and asthma. Unfortunately, we find repeated instances where spirometry is needed to establish an accurate diagnosis or evaluate severity and progression of lung disease and it is not being utilized. When used alone or with bronchial challenge testing, this valuable tool can greatly increase the confidence in a proper diagnosis and establish disease severity.

What Can CT Scanning Contribute?

Computed tomography (CT) scanning provides multiple scanned images or slices through the chest. The fine resolution images have enabled the detection of early emphysema and airway disease in smokers who did not demonstrate airflow obstruction when performing spirometry (specifically the post-bronchodilator FEV1/FVC was >70% and the FEV1 percentage of predicted was >80%). CT scanning has been able to quantify the extent of changes due to emphysema and to see early evidence of airtrapping with the help of software programs designed to measure these changes. Moreover, CT scanning was able to detect significant increase in airway wall thickness at the segmental and subsegmental levels indicating that inflammation was occurring early in the development of the disease.6 When CT scanning was combined with results from spirometry in patients diagnosed with COPD by post-bronchodilator FEV1/FVC and FEV1 percent predicted, a strong correlation was found that held true through increasing severity of the disease and the progression through the various GOLD categories of COPD.7

What Is FENO and What Can It Do?

FeNO is the abbreviation for fractional exhaled nitric oxide concentration. FeNO has been established as a noninvasive biomarker that reflects airway inflammation. An elevated FeNO in patients with symptoms of asthma is indicative of eosinophilic airway inflammation which is a phenotype of asthma that responds to inhaled corticosteroids (ICS). Measuring FeNO has several advantages; it is noninvasive, it is easy to repeat the measurements, and it is relatively easy to perform in patients with severe airflow obstruction who would find other objective measurement to be difficult to perform. The test has been found to be useful in getting a baseline measurement and monitoring the response to steroid therapy with subsequent dose changes up or down as levels change. In addition, FeNO monitoring can be useful in assessing patient adherence to an asthma action plan.8

In 2011 the American Thoracic Society (ATS) published guidelines for the use of FeNO for clinical applications and described three classifications of asthma based on the results. If the levels are found to be < 25 parts per billion (ppb) or < 20 ppb in children it is less likely that there is eosinophilic inflammation and there would be a low level of response to ICS. At FeNO levels >50 ppb (35 ppb in children) eosinophilic inflammation is present and in symptomatic patients it is very likely that ICS treatment would be quite useful to help manager their asthma. For FeNO levels falling between these points (25 to 50 ppb or 20 to 35 ppb in children) clinical use of this information calls for caution. As for monitoring response to anti-inflammatory therapy, the ATS guidelines recommend a significant response to be defined as a drop of 20% or more in FeNO levels after treatment for initial values > 50 ppb (or a drop greater than 10 ppb for initial values < 50 ppb).8 In a meta-analysis published in the European Respiratory Journal in 2016, the authors found evidence that using FeNO to help manage adults with asthma resulted in a statistically significant reduction in exacerbations. Management included the initiation and titration of ICS; FeNO helped assess the baseline and check the patient as ICS was started, then helped know when to increase or decrease the dose following the NAEPP guidelines in a stepwise fashion.9

Forced oscillation technique/Impulse oscillometry system (FOT/IOS) is performed by having the patient breathe quietly at tidal volume while the device introduces sound ways in the airways. The device measures the pressure-flow relationship of the sound waves and analyzes respiratory function in a much different way than spirometry. As the patient breathes through a mouthpiece the device uses a loudspeaker that generates sound waves which travel through the large and small airways. The device then measures the pressure and flow oscillations that are generated by the sound waves. The output is a measurement of respiratory impedance (described as Zrs) which includes respiratory resistance (Rrs) and respiratory reactance (Xrs).10 The relationship is described as  (Zrs) 2 = (Rrs) 2 + (Xrs) 2.

Because tidal volume is used and the patient does not have to perform the forced, prolonged exhalation and rapid inhalation that is used in spirometry, FOT/IOS is easy to perform. Researchers have found that FOT/IOS is able to assess lung function on young children (ie < 5 years of age), elderly patients who may be too weak or have cognitive limitations, and even evaluating lung function of patients on mechanical ventilation or during sleep.11 As the frequency of the sound wave is altered, different levels of the airways can be evaluated so the FOT/IOS can provide a unique look at the more distal, small airways that are not assessed by spirometry. FOT/IOS is considered to be a complementary test and not a surrogate for spirometry but it can be used to assess response to bronchodilators in patients with COPD and asthma, and bronchial challenge testing. Recent studies have found that FOT/IOS may be valuable in predicting loss of control in asthma before any changes have been found by spirometry—particularly in pediatric patients who find it difficult to verbally describe their symptoms or who may not perceive changes in their asthma.12

Spirometry is foundational in working with COPD and asthma patients. Now, new testing methods are being included with spirometry to get a much better, more detailed look at pulmonary disease, treatment options, the progression of disease, and the patient’s quality of life. As we have seen, CT scan, FeNO, and FOT/IOS have added valuable information that complements and enhances our understanding of diseases and these tests work hand-in-hand with spirometry. Get more familiar with these issues; knowledge of these diagnostic tools adds value to you as a respiratory therapist and enhances the high quality of care you provide. RT