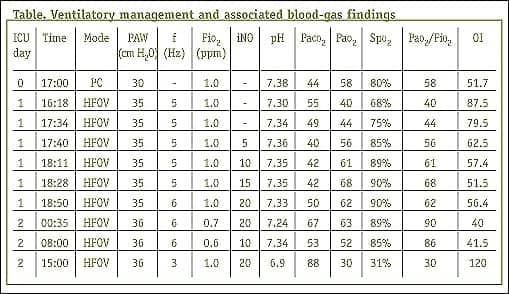 The management of severe acute respiratory distress syndrome (ARDS) is a clinical challenge that continues to face clinicians. Conventional ventilatory strategies have the potential to cause ventilator-induced lung injury, and exploiting several available lung protective ventilatory strategies—especially a blend of these such as prone positioning, high frequency oscillatory ventilation (HFOV), and inhaled nitric oxide—might help improve alveolar recruitment.1 Several studies have demonstrated the successful use of HFOV in adult patients with ARDS. We present a case report on the use of HFOV in a patient with Wegener’s granulomatosis.

A 22-year-old, previously healthy Sri Lankan male immigrant was admitted to the intensive care unit of a community hospital with an 8-day history of malaise, fatigue, large joint arthralgias, and intermittent bright red hemoptysis. History was significant for orthopnea, fever, decreased appetite, and passing of “dark yellow” urine. He complained of painless redness in the left eye, present since 3 days prior to admission. He had not attended his school for 6 months due to generalized unwellness.

The day following admission, he required endotracheal intubation for hypoxia and ongoing hemoptysis. His chest radiograph showed bilateral pulmonary infiltrates and a CT chest scan revealed nodular airspace infiltrates (right > left) with a 2 cm mediastinal lymphadenopathy. In addition to the alveolar hemorrhage, there was evidence of renal involvement with microscopic hematuria and 1 gm proteinuria, although his creatinine clearance remained normal. He was managed with antibiotics and was also pulsed with IV methylprednisolone (1 gm for 3 days). Successive tracheal cultures from fiberoptic bronchoscopy did not grow any organisms. A bilateral lower limb Doppler ruled out deep venous thrombosis. He was ventilated on assist-control ventilation with 600 mL of tidal volumes, fraction of inspired oxygen (Fio2) 1.0, and positive end-expiratory pressure (PEEP) +12 cm H2O. His peak inspiratory pressures were at 32 cm H2O. As his hypoxia was persistent, PEEP was stepped up to +15 cm H2O. In view of increasing oxygen requirements, he was transferred to the intensive care unit in a tertiary care university-affiliated hospital 5 days later.

On arrival, he was ventilated with conventional mechanical ventilation using pressure control mode, fraction of inspired oxygen 1.0, and positive end-expiratory pressures +18 cm H2O and peak airway pressures at 30 cm H2O. In view of the persistence of hypoxia, the PEEP was increased to +20 cm H2O (measured tidal volumes of 400 mL to 450 mL). Sedative and paralyzing agents were titrated. His oxygenation improved transiently with recruitment maneuvers (40 cm H2O for 40 seconds). In view of the persistence of hypoxia (Spo2: 75% to 80%), HFOV was commenced, with peak airway pressures (PAW) set at 5 cm H2O above his PAW on conventional ventilation. No significant benefit was achieved initially, and a trial of nitrous oxide (iNO) was initiated. With this regimen, his oxygenation improved, allowing the Fio2 to be weaned (see Table).

He continued to have intermittent endotracheal tube bleeding that required blood product support. He remained stable on this ventilatory strategy until a sudden deterioration on day 2. He developed increasing hemoptysis followed by a sudden marked drop in his blood pressures and Spo2. Resuscitation was started with fluid administration and urgent bilateral intercostal drain placement although no evidence of pneumothorax was noted. Manual bag-mask ventilation with a PEEP valve was initiated. Intravenous nor-epinephrine infusion was started for hypotension. Despite all resuscitative measures he could not be resuscitated and eventually succumbed. At autopsy, massive pulmonary hemorrhage was noted.

We present a case of Wegener’s granulomatosis with severe hemoptysis and acute respiratory failure. Combined use of HFOV and iNO improved the oxygenation acutely over approximately 1 to 2 hours in this patient with acute diffuse alveolar hemorrhage. Although the literature usually describes these interventions in ARDS, there may be a role for these nonconventional modes in other diffuse lung diseases also. The patient presented with a “severe flare” of Wegener’s granulomatosis (disease activity as scored by the BVAS2: three major criteria) and died of sudden massive hemoptysis, which could not be expected to be prevented by a ventilatory mode. Diffuse alveolar hemorrhage (DAH) occurs in 12% to 15% of patients with Wegener’s granulomatosis. In ANCA-associated vasculitis, presence of DAH is associated with poor prognosis.3 Diffuse alveolar hemorrhage requiring mechanical ventilation is associated with a higher mortality.4

Since the study performed by Fort et al5 on the use of HFOV in adult ARDS, an increasing number of trials have been published revealing the advantage of its early institution and a noteworthy upturn in the oxygenation as evidenced by a better Pao2/Fio2. HFOV operates by accomplishing low tidal volume ventilation at a higher mean airway pressure, and at the same time circumventing barotrauma to the proximal alveolar units.6 High frequency oscillatory ventilation is still predominantly used to salvage patients with unsuccessful attempts in improving oxygenation on conventional ventilation.7 Several prospective studies have been conducted on the combined use of HFOV and iNO with or without prone positioning.8,9 A meta-analysis comparing HFOV to conventional ventilation in ARDS patients revealed a trend toward a decreased 30-day mortality.10

Studies comparing the outcomes in survivors versus nonsurvivors have shown that patients with lower Pao2/Fio2, higher Fio2, Paco2, and oxygenation index (OI), and higher number of conventional ventilator days prior to the initiation of HFOV have a higher mortality.7,10-12 Oxygenation index has an independent association with mortality, as a marker of pulmonary disease severity.13

Although HFOV with or without nitric oxide is being increasingly accepted as a ventilatory support mode for ARDS, this case report indicates that this approach may be valuable in other severe diffuse pulmonary diseases associated with severe hypoxemia. 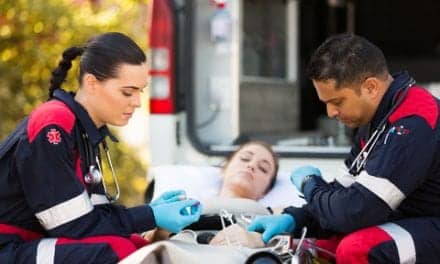