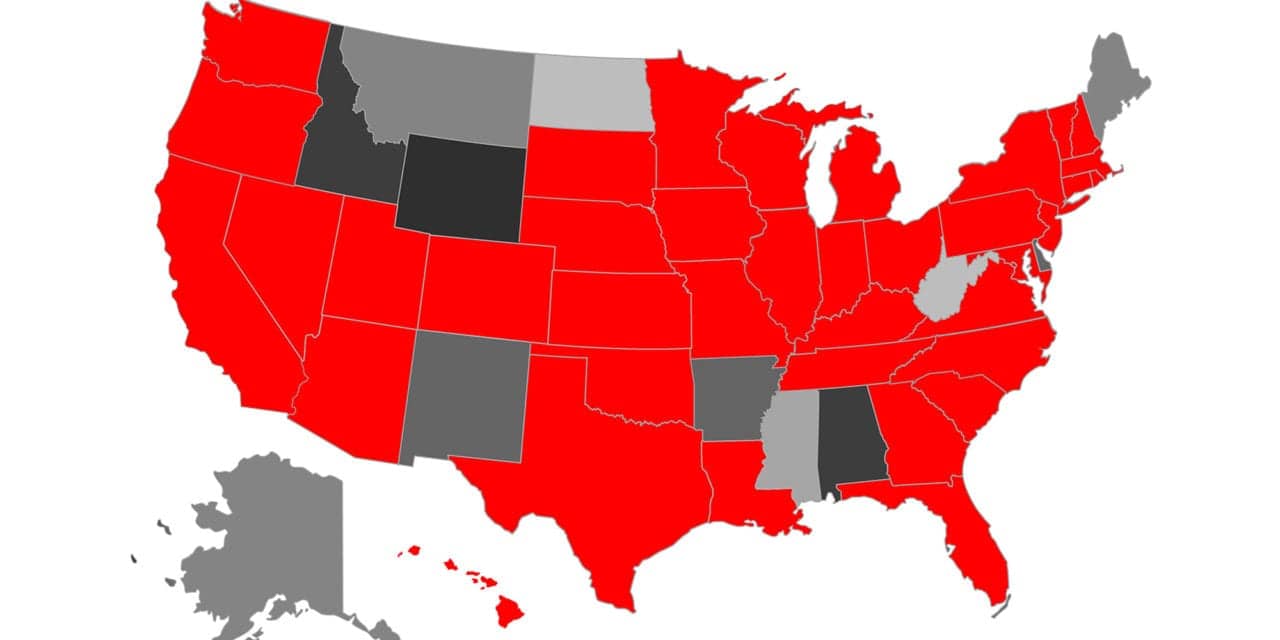 The first reported coronavirus death in New Jersey on Mar 10 increased the US death toll to 30. The 69-year-old patient from Bergen County, NJ had a history of emphysema and diabetes, The Burlington County Times reported.

“We are sad to report the first death in a case of COVID-19 in New Jersey. Our prayers are with the family during this difficult time. We remain vigilant to doing all we can — across all levels of government — to protect the people of New Jersey,” governor Phil Murphy said in a statement.

There are now a total of 1,037 cases of COVID-19 in the United States, according to Johns Hopkins Univ Center for Systems Science and Engineering. Washington State reported its 23rd & 24th deaths on Mar 10, while California’s second death was reported Mar 9 and its third death on March 10. Two other Americans have died in Florida.

Thirty-eight states and the District of Columbia have now confirmed COVID-19 cases, including the first reported cases in Ohio, Indiana, Kansas, Louisiana, Michigan and South Dakota.

South Dakota’s first five cases were reported Mar 10, including a patient who died. However, SD Governor Kristi Noem said the death had not yet been confirmed as coronavirus-related, The Bismarck Tribune reported.

An elementary-aged student in Sacramento, California is now the youngest confirmed case of coronavirus reported in the US. According to NBC Bay Area, the male student, whose specific age was not disclosed, attends Elk Grove Unified School District in Sacramento. The district has shut down all schools from Mar 7 through Mar 13.

New York Governor Andrew Cuomo has issued an emergency order to create a 1-mi radius containment zone in New Rochelle, New York, which is part of a county that includes 108 of the state’s 173 COVID-19 cases, Reuters reported.

“This is literally a matter of life and death,” Cuomo said at a press conference announcing the measures, which will be imposed on an area just 20-miles away from New York City.

As per the order, a two week shutdown of large gathering places such as schools, temples, and churches in the affected zone will be supported by the New York National Guard, which will provide food delivery and facilities cleaning, USA Today reported. Cuomo called it a “common sense” approach to contain the largest cluster of the virus in the US.

According to New Rochelle mayor Noam Bramson, the containment zone is not an exclusion or quarantine zone and does not prohibit movement into or out of the area, CBS New York reported.

The number of cases in New York State have now exceeded those in Washington State, which will see its first bans on large public gatherings beginning Mar 11. According to The Seattle Times, Governor Jay Inslee will announce the ban on public gatherings of more than 250 people in three Washington counties: King, Snohomish, and Pierce. It would apply to sporting events, concerts, or cultural events, The Seattle Times reported.

A ban on public gatherings of over 1,000 people has already been implemented in Santa Clara County, California, which reported its first COVID-19 death on Mar 9. The ban will affect events at San Jose’s SAP Center, which is the host arena for San Jose Sharks hockey games, The Mercury News reported.

[More on other public events being canceled or postponed, below.]

Two of the lawmakers, Rep Collins and Rep Gaetz, had contact with President Trump prior to their self-quarantine. According to the President, he has not been tested for COVID-19 because the White House physician did not recommend it, CNN reported. “It’s something I would do, but again, spoke to the White House doctor — a terrific guy a talented guy. He said he sees no reason to do it,” Trump said.

Speaker of the House Nancy Pelosi, who was asked on Monday if the US Capitol should be closed due to the coronavirus outbreak, emphatically said “No, no, no.” On Tuesday, after another senior lawmaker told colleagues they should return to their home districts, Pelosi reportedly said: “We are the captains of the ship. We are the last to leave,” The Hill reported.

Harvard University has told students to move out of their on-campus housing by March 15, according to CNN. The move will “de-densify” the campus and aims to prevent community spread of the virus. The University has told students not to return to campus following its spring break and will be holding online classes until further notice, CNN reported.

According to CNN, a number of US universities have canceled their international study abroad programs, after the CDC recommended colleges “consider” doing so. A list compiled by CNN lists the following universities as canceling programs:

The Coachella music festival has been postponed until October 2020, according to Eater Los Angeles. The annual 6-day festival, which draws an estimated 125,000 people per day, was scheduled for April 10-12 and 17-19 in Indio, California.

The Ivy League collegiate athletic conference has canceled its men’s and women’s NCAA basketball conference championship tournaments, which were to be held this week in Cambridge, Massachusetts.

However, the NCAA has not canceled its basketball national championship tournaments, also known as “March Madness.” According to a statement by NCAA president Mark Emmert, “Neither the NCAA COVID-19 advisory panel, made up of leading public health and infectious disease experts in America, nor the CDC or local health officials have advised against holding sporting events. In the event circumstances change, we will make decisions accordingly.”

ESPN.com has compiled a list of major sporting events canceled or relocated due to coronavirus; events include some Olympic qualifiers and test events. The International Olympic Committee has not announced any changes to the Tokyo 2020 games, scheduled to begin July 24 and end August 9. In its most recent statement on Mar 3, the IOC said the games would go on as scheduled.

“The International Olympic Committee executive board today expressed its full commitment to the success of the Olympic Games Tokyo 2020, taking place from 24 July to 9 August 2020,” the IOC said in a statement. “The IOC EB heard a report on all the measures taken so far to address the coronavirus situation, which was followed by a comprehensive discussion. A joint task force had already been created in mid-February, involving the IOC, Tokyo 2020, the host city of Tokyo, the government of Japan and the World Health Organization. … The IOC will continue to follow the advice of WHO, as the leading United Nations agency on this topic.”