Coronavirus Has the United States At A Fork in the Road 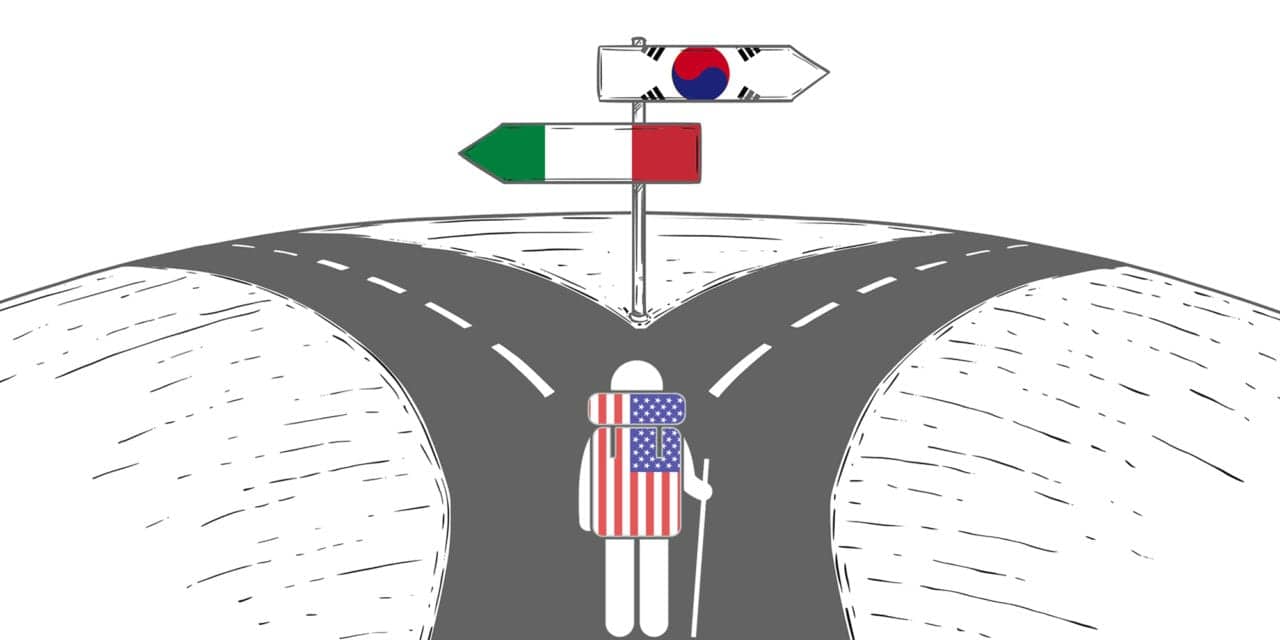 On Monday, the United States confirmed its 74th death from COVID-19 as the virus has now spread to 49 states, Washington DC, Puerto Rico, and the US Virgin Islands.

As cases spike, federal authorities have imposed travel bans, states have closed schools, and local/state governments have implemented social restrictions on large public gatherings in an attempt to stem the outbreak. The practice, known as social distancing, is intended to mitigate the rate of infection and spare healthcare facilities from an “all-at-once” tsunami of critically-ill patients.

On Friday, President Trump declared a National Emergency. Then on Monday, the President announced new CDC guidelines that would limit groups to no more than 10 people, while older Americans were urged to stay in their homes. Meanwhile, the governors of NY, NJ and CT have imposed an 8:00pm curfew on certain businesses and have banned gatherings of 50+ people.

“We must lean in to protecting the most vulnerable: those with chronic or severe medical conditions, especially seniors,” Dr Adams said. “Now is the time to lean into that.”

But coming more than seven weeks after the nation’s first confirmed case of COVID-19 on January 20, is it too little, too late?

When announcing the new CDC guidelines on small groups, the President admitted the outbreak could last into the summer, perhaps even July or August. What could the situation look like by then? For context, examining a pair international responses could offer the US a glimpse at two different outcomes in its immediate future.

The Time Is Now

At a Congressional hearing on Mar 11, National Institute of Allergy and Infectious Diseases (NIAID) director Dr Anthony Fauci told lawmakers that the next four weeks would be a critical time for the United States in its fight to control the spread of COVID-19.

“…It’s critical because we must be much more serious as a country about what we might expect. We cannot look at it and say, ‘Well, there are only a couple of cases here. That’s good.’ Because a couple of cases today are going to be many, many cases tomorrow,” Dr Fauci told Congress.

To his point, as recently as Feb 29 the US reported only 68 cases of COVID-19 and its first patient death. However, by March 12 those numbers had ballooned to 1,701 cases and 41 deaths and have not stopped.

In roughly one month’s time, some infectious disease forecasters project the US number of cases could top 350,000 in a moderate scenario (or 1.3 million cases in a severe scenario), while one scientist went so far as to say over 50% of Americans could contract the virus because its novel status and lack of a vaccine mean a lack of antibodies, unlike the flu.

While the exact projections vary and depend greatly on the virus’s mortality rate as well as the degree of intervention imposed in response, what’s clear is that experts think the short-term outlook is grim.

“Things will get worse before they get better,” Dr Fauci told ABC’s This Week. “What we’re trying to do is to make sure they don’t get to the worst case scenario.”

The international response to COVID-19 has varied country to country, and so has the effectiveness of containment. While the overwhelming majority of cases remain in China (81,020), thirteen other nations have documented more than 1,000 infections. The hardest hit among those nations, by far, is Italy.

As of Mar 16, known cases in Italy had reached 27,980. Only one month ago, that number was three. Yes, three. Then from February 21-23, a spike in cases was reported in the Lombardy region of northern Italy after one hospital’s “mishandling” of the disease, according to Prime Minister Giuseppe Conte.

In the weeks that have followed, the virus has spread like a wildfire within Italy and even beyond its borders, as dozens of other nations reported new cases that could be traced back to travel from the country.[1,2,3] On Feb 22, the country reported its first two COVID-19 deaths.

In response, local and regional travel restrictions were put in place, as well as some public closures and transport restrictions, but only in the severely affected regions to start. By Feb 26, cases reached 470 and forced the shut down of cultural events like Venice’s Carnival and Milan Fashion Week.

Italy’s containment efforts followed the outbreak rather than getting out in front, as the country rolled out lockdowns only in its northern region, affecting some 16 million people by Mar 7.

But only two days later, after the virus continued to spread unabated and infections crossed 9,000, its government locked down the entire population of 63 million people on Mar 9, in a desperate attempt to curb the disease. Unfortunately, the virus continued to spread, and on Mar 15 the country reported a surge with 368 new deaths (1,809 total) and 3,590 cases in a single day, driving its cumulative total past 24,000.

“You are never where you think you are” when it comes to containment, Dr Fauci told ABC’s This Week. “If you think you’re in line with the outbreak you’re already three weeks behind. You almost need to be overreacting a bit to keep up with it.”

One of the first nations outside China to be hit with the novel coronavirus was South Korea. On Jan 19 — one day before it arrived in the United States — South Korea confirmed its first case of COVID-19 in a female patient who traveled from Wuhan, China to Incheon.

A month after its first case, the country reported its 100th infection on Feb 19 and first death on Feb 20 as city streets became “ghost towns” and resembled a “zombie apocalypse.” The virus exploded after a cluster was reported in the city of Daegu, and quickly the country saw the number of cases jump into the thousands in a matter of days. Even US military personnel stationed in Korea were not shielded from infection.


Following Korea’s first death, the government raised the country’s alert level on Feb 23 to its highest level, which allowed it to close down schools, ban large gatherings, and impose restrictions on movement and travel throughout the country. According to The New York Times, the country simultaneously ramped up its healthcare preparedness response, requiring testing for all respiratory patients seeking hospital care and approving newly built hospital wards.

As the virus continued to spread, South Korea began aggressively testing, conducting nearly 8,000 tests in the first month, SCMP reported. To expedite testing, drive-thru testing centers were also created. Currently, the country has a capacity of nearly 20,000 tests per day, which is more than any other nation, according to BBC News. As of Mar 9, 210,144 tests had been completed, compared to about 60,000 in Italy and 13,953 in the US, according to the Atlantic.

South Korea’s health minister told CNN that other governments dealing with outbreaks should focus efforts on early testing and global cooperation. “Raising the testing capability is very important because that way, you can detect someone who’s carrying the virus, then you can contain the virus,” Health Minister Park Neunghoo told CNN.

“Korea is starting to flatten and come down a little,” Dr Fauci told ABC’s The Week when asked if South Korea (and China) had gotten control of their COVID-19 outbreaks. “It’s over for now and hopefully for good.”

So Which Way, USA?

When comparing the US data to Italy and South Korea over the same time period (days since ~100th reported case), the US has a fewer number of infections through day 14 (4,287 / 7,375 / 6,284 respectively) but its trajectory is roughly the same as the others. (See Figure 1 and Table 1 below.)

While early travel bans slapped on China Jan 31 and on Iran Feb 29 bought the US some time, its mitigation (social distancing) protocols only just began to be rolled out Mar 13, and they vary state to state and city to city. Some schools are closed, others remain open. Some cities have banned groups more than 50, others allow groups up to 1,000, and others have no restrictions at all.

At the same time, US testing capabilities are severely behind the ball. As previously mentioned, South Korea attributes much of its mitigation success to the early testing and identification of patients.

However, in the US the CDC’s original January kits reportedly had problems and weren’t working as expected. That came after the US declined to accept test kits developed by the World Health Organization, for reasons not explained when a Senator asked HHS, CDC and FDA.

Then in March, unexplained delays in the distribution of tests occurred despite initial claims by the White House Coronavirus Task Force and Vice President Mike Pence that more than one million tests were distributed and another 4 million were on the way.

It was a process made more difficult for testing centers by the application process for the CDC’s emergency use authorization. EUAs are required to administer the COVID-19 tests but one expert called the process “so complicated that it would have taken weeks to receive one,” according to The Atlantic.

What all this amounts to is a difficult road ahead for Americans, because according to US Surgeon General Dr Jerome Adams the situation in the US has the potential to mirror Italy’s. “When you look at the projections, there is every chance that we could be Italy, but there is every hope that we will be South Korea, if people actually listen, if people actually social distance,” Dr. Adams told CNN’s Alisyn Camerota on Mar 16.

“We’re at a critical inflection point. We have the same number of cases now that Italy had two weeks ago,” Dr Adams said. “We have a choice to make: do we really want to lean in to social distancing and mitigation strategy and flatten the curve, or do we just want to keep going on with business as usual and end up being Italy?”

For America, a significant increase in cases in the short-term is certain, but which path the US follows long-term — Italy or South Korea — is less so.

“The worst is, yes, ahead for us,’’ Dr Fauci said at a national press briefing with President Trump on Sunday. “It is how we respond to that challenge that’s going to determine what the ultimate end point is going to be.”