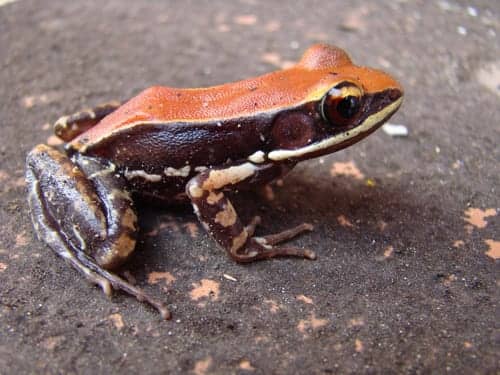 Frog mucus is loaded with molecules that kill bacteria and viruses, and researchers are beginning to investigate it as a potential source for new anti-microbial drugs. One of these “host defense peptides,” courtesy of a colorful tennis-ball-sized frog species (Hydrophylax bahuvistara) from southern India, can destroy many strains of human flu and protect mice against flu infection, according to research published in the journal Immunity.

This peptide is far from becoming an anti-flu drug, but this is the first evidence of its flu-killing ability. It seems to work by binding to a protein that is identical across many influenza strains, and in lab experiments, it was able to neutralize dozens of flu strains, from the 1934 archival viruses up to modern ones. The researchers named the newly identified peptide “urumin,” after the urumi, a sword with a flexible blade that snaps and bends like a whip, which comes from the same Indian province, Kerala, as the frog.

“Different frogs make different peptides, depending on where their habitat is. You and I make host defense peptides ourselves,” said flu specialist and study co-author Joshy Jacob of Emory University. “It’s a natural innate immune mediator that all living organisms maintain. We just happened to find one that the frog makes that just happens to be effective against the H1 influenza type.”

Researchers from the Rajiv Gandhi Center for Biotechnology in Kerala, India, have been isolating peptides from their local frogs and screening them for potential anti-bacterials, but Jacob wondered if there might also be peptides that neutralize human-infecting viruses. Jacob and his colleagues screened 32 frog defense peptides against an influenza strain and found that 4 of them had flu-busting abilities.

“I was almost knocked off my chair,” says Jacob. “In the beginning, I thought that when you do drug discovery, you have to go through thousands of drug candidates, even a million, before you get 1 or 2 hits. And here we did 32 peptides, and we had 4 hits.”

Unfortunately, when the researchers exposed isolated human red blood cells (in a dish) to the flu-buster peptides, three out of the four proved toxic. However, the fourth–urumin–seemed harmless to human cells but lethal to a wide range of flu viruses. Electron microscope images of the virus after exposure to urumin reveal a virus that has been completely dismantled.

Jacob’s team is still working out the details of the flu-destroying mechanism, but the urumin appears to work by targeting a viral surface protein called hemagluttinin, the H in H1N1. “The virus needs this hemagglutinin to get inside our cells,” says Jacob. “What this peptide does is it binds to the hemagglutinin and destabilizes the virus. And then it kills the virus.”

Vaccines Do Work for Pandemic Influenza

Cost of a Polluted Environment: 1.7 Million Child Deaths a Year