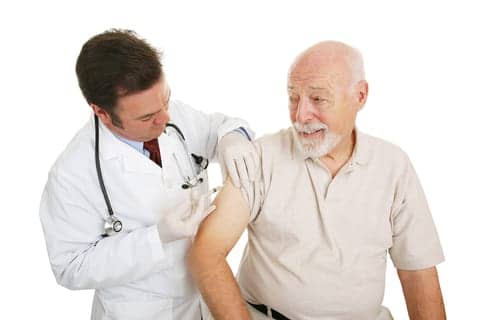 Among nursing home residents, flu immunizations with four times the strength of standard flu shots considerably reduced the risk of hospitalizations during the influenza season.

“If given to all approximately 1.5 million nursing home residents, a one percent drop in hospitalizations would translate to thousands fewer being hospitalized,” said Stefan Gravenstein, MD, MPH, lead author of the study, Director of the Center for Geriatrics and Palliative Care at University Hospitals Case Medical Center, and on faculty at both the Case Western Reserve University School of Medicine and adjunct at the Warren Alpert Medical School at Brown University.

According to the Centers for Disease Control and Prevention (CDC), the risk of hospitalization is one in five during the flu season, the same as in this study.

The study involved more than 50,000 participants 65 years old and older (nearly 14,000 were over the age of 90) from 823 nursing homes in 38 states. The residents were given influenza shots to help protect them from influenza during the period of November 2013 to March 2014.

“Flu in a nursing home population is a major cause of hospitalizations,” said Dr. Gravenstein. “In addition to pneumonia, flu can contribute to heart attacks, heart failure, and strokes, especially in an older nursing home population where it can easily spread among residents. In our study, for every 83 individuals receiving the high dose vaccine a person was prevented from being hospitalized during the influenza season,” he said.