Researchers believe the practice of producing influenza vaccines in chicken eggs could be partially to blame for the vaccines being less effective than intended, according to an article in Chemical & Engineering News.

Most vaccines are made by growing WHO-selected influenza viruses in fertilized chicken eggs, purifying the viruses and inactivating them.

However, sometimes the WHO guesses wrong on which viruses will be active that year, or viruses mutate in the wild so that they are different from the ones in the flu shot.

Viral mutations can also occur during vaccine production. Because avian cells display different proteins on their surfaces than human cells, sometimes the influenza virus mutates so that it can better latch onto and infect bird cells, according to the C&E News article. As a result, the immune system of a person who got a flu shot might not recognize and attack the influenza virus they become infected with.

Some manufacturers have developed egg-free methods. For cell-based vaccines, viruses are grown in canine kidney cells, which are more similar to a human’s than bird cells are.

To produce recombinant vaccines, researchers transcribe viral antigens – cell-surface proteins that trigger an immune response – into DNA, which they insert into a carrier virus. This virus is then used to infect the cells of fall armyworms, which make large amounts of the flu antigen proteins.

However, few studies have been conducted on whether the egg-free preparations are really more effective, and most scientists agree that getting any flu vaccine is better than none.

US Measles Cases Reach 704, the Highest Point This Century 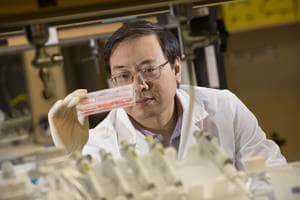