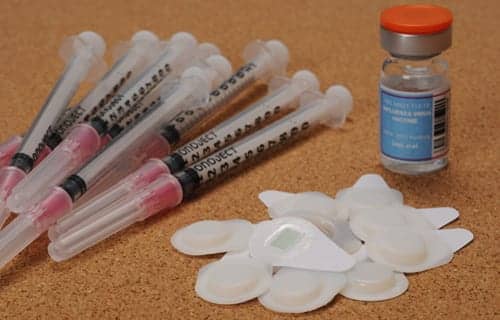 The flu patch could potentially allow self-administration of the flu vaccine while also eliminating most of the pain of the traditional flu shot.

Unless acupuncture is your thing, you probably don’t enjoy being stuck by needles. For me, it ranks right up there with root canal or stepping on broken glass. And yet as we all learned at a very young age, injections are an unfortunate necessity of good health, and the price we pay is the momentary discomfort of a needle puncture.

But scientists at Georgia Tech, Emory University, and the CDC are experimenting with a new delivery method for the influenza vaccination that may potentially allow self-administration of the vaccine while also eliminating most of the pain of the traditional flu shot.

The “flu patch” is a small Band-Aid sized adhesive that could reduce the administration of the vaccine to three simple steps: Place-Press-Remove. The patch is equipped with a grid of more than 50 microscopic needles about as tall as the thickness of a few hairs.

According to researchers, the patches are pressed “painlessly” onto a person’s forearm to carry vaccine into the outer layers of skin, where they prompt an immune reaction from the body.

VOTE NOW!
If proven safe and effective (and if commercially available), would you vaccinate yourself using a flu “patch?”
Visit RT Magazine’s LinkedIn page to vote in our poll.

To test individuals’ ability to self-administer the vaccine, researchers conducted a study1 of 91 volunteers with no previous experience using microneedle patches. After receiving brief instructions, subjects applied three patches, had a fourth patch applied by a member of the research team, and received an injection of saline with a conventional hypodermic needle. (For the purposes of the study the patches and needle did not contain the flu vaccine—researchers tested self-administration only, not efficacy of the patch as a delivery method.)

Using an applied dye to highlight the tiny holes made by the microneedles, researchers were able to assess the accuracy of self-application.

“We found that everyone was capable of administering a microneedle patch appropriately, though not everyone did on the first try,” Mark Prausnitz, a professor at Georgia Tech, said in a news release.

One version of the patch included a small clicking sound to indicate proper applied force, the feedback from which virtually eliminated administration mistakes, according to the findings, which researchers believe to be the first published report of a head-to-head comparison between microneedle patches and traditional intramuscular vaccine injection in humans.

Now, the patch doesn’t completely say goodbye to needles—technically it trades one puncture for more than 50—but the microneedles diffuse the pain, which is reportedly 10-times less than the traditional injection.

According to the study, published online in the journal Vaccine, patients rated the pain threshold of the patch at only 1.5 on a scale of 100, whereas the traditional needle method was rated a 15.

The option of self-administering via the patch method appears to have a significant effect on intent to vaccinate. Subjects were asked if they planned to receive a flu vaccination in the next year, with 46% answering “Yes.” But when asked if their intent to be vaccinated would change if it could be done with the patch, the numbers jumped from 46 to 65%.

“If this holds for the population as a whole, that would have a tremendous impact on preventing disease and the cost associated with both influenza and the vaccination process,” said co-author Paula Frew, an assistant professor in the Emory University School of Medicine.

The study’s findings are important because, according to a January 2014 report2 by the Trust for America’s Health, using CDC vaccination data, only 45% of Americans received a flu shot during the 2012-13 season despite thousands of deaths and over 200,000 hospitalizations annually.

In fact, only about a third of adults 18 to 65 years old were vaccinated:

Increasing the immunization rate could cut the deaths, hospitalizations, and costs associated with the disease. In fact, researchers believe the costs to administer the actual vaccine could be slashed using the patch method. They note that the cost of storing and administering the flu vaccine accounts for as much as 75% of the total cost.

If low-cost microneedle vaccine patches could be produced and eliminate most of these clinical costs, self-administration could provide significant cost savings to the nation’s health care system, they said.

“We want to get more people vaccinated, and we want to relieve health care professionals from the burden of giving these millions of vaccinations,” said Prausnitz, who hopes to begin a Phase 1 clinical study of the vaccine patches in humans during the spring of 2015, followed by larger studies and potential commercial availability within five years.

“Our dream is that each year there would be flu vaccine patches available in stores or sent by mail for people to self-administer. People could take them home and apply them to the whole family.”

Mike Fratantoro is chief editor of RT. Contact him at [email protected]