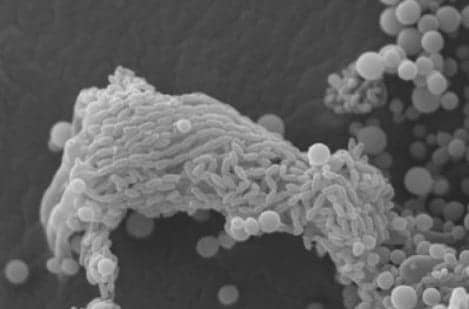 Researchers have sequenced the entire genome and all the RNA products of the most important pathogenic lineage of Cryptococcus neoformans, a strain called H99 — a fungus responsible for a million cases of pneumonia and meningitis every year.

The results, in PLOS Genetics, also describe a number of genetic changes that can occur after laboratory handling of H99 that make it more susceptible to stress, hamper its ability to sexually reproduce and render it less virulent.

The study provides a playbook that can be used to understand how the pathogen causes disease and develop methods to keep it from evolving into even deadlier strains.

“We are beginning to get a grasp on what makes this organism tick. By having a carefully annotated genome of H99, we can investigate how this and similar organisms can change and mutate and begin to understand why they aren’t easily killed by antifungal medications,” said study co-author John Perfect, MD, a professor of medicine at Duke who first isolated H99 from a patient with cryptococcal meningitis 36 years ago.

The fungus Cryptococcus neoformans is a major human pathogen that primarily infects individuals with compromised immune systems, such as patients undergoing transplant or those afflicted with HIV/AIDS. Researchers have spent many years conducting genetic, molecular and virulence studies on Cryptococcus neoformans, focusing almost exclusively on the H99 strain originally isolated at Duke. Interestingly, investigators have noticed that over time, the strain became less and less virulent as they grew it in the laboratory.

The results will not only help researchers study this particular organism, but can also serve as a starting point for studies on other strains of Cryptococcus neoformans.

“This genome will serve as an important reference for the field, to enable a wide range of analysis from examining individual genes to comparing the genomes and transcriptomes of other strains and conditions,” said Christina Cuomo, PhD, study co-author and leader of the Fungal Genome Sequencing and Analysis Group at the Broad Institute. “We are already leveraging this genome to identify variants in the sequence of hundreds of additional isolates of Cryptococcus neoformans.”

Windshield Washer Fluid May Be Source of Legionnaires’ Disease