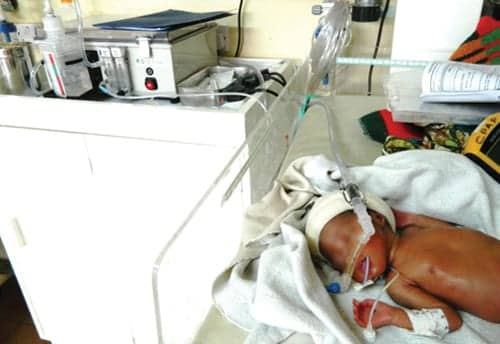 Worldwide, more than one in 10 babies are born premature.1 Eleven countries have preterm birth rates of more than 15%, and Malawi in southeastern Africa tops the list at 18%—nearly one in every five births.1 Prematurity (born at less than 37 weeks of gestation) is closely linked to acute respiratory infections, the leading cause of death in children under 5 years old.2

Because their lungs are underdeveloped, preemies are especially susceptible to respiratory problems. In developed countries, like the United States, the latest in medical technology can often treat complications before they become life-threatening. However, in much of the developing world, where access to expensive equipment and the resources to purchase them are both scarce, prematurity often means an early death or a life of disability.

But thanks to the ingenuity and determination of bioengineering students at Rice University in Houston, newborns in Malawi suffering from severe respiratory complications now have access to the life-saving technology known as bubble CPAP.

The Rice 360° Institute for Global Health Technologies and its undergraduate component, Beyond Traditional Borders (BTB), design and find the means to produce and implement low-cost medical devices for use in resource-strapped countries. Over 400 students in BTB have helped design a total of 58 global health technologies that have gone on to benefit 60,000 people in 28 countries, according to Rice 360°.

Beginning in 2006, Rice 360° partnered with Queen Elizabeth Central Hospital (QECH) in Blantyre, Malawi, to help solve the problem of severe respiratory failure in newborns. Under the leadership of Rebecca Richards-Kortum, PhD, the Stanley C. Moore Professor and chair of Rice’s bioengineering department and director of both BTB and Rice 360°, students began designs for a low-cost bubble CPAP device, which prevents upper airway collapse and improves oxygenation by maintaining positive airway pressure.

The key principle for the project, apart from safety and effective functionality, was low cost. Traditional bCPAP devices can cost upwards of $6,000. To make the device affordable and reproducible for Malawi hospitals, BTB students began with a bCPAP prototype made with a plastic shoebox and aquarium pumps. Later iterations of the device, named Pumani—which means “breath” in the Malawian language of Chichewa—used consumer-grade regulators and aquarium pumps and opted for analog flow meters and gravimetric flow tubes. They also added a sheet metal casing, a flow generator, and a patient interface. The flow generator provides ambient airflow to the infant, and an optional oxygen port allows caregivers to treat patients with supplemental oxygen.

Like other bCPAP devices, submersion of one end of the tubing in a bottle of water creates pressure. By increasing the depth of the tube, the caregiver increases the pressure and the production of bubbles. Pressurized flow helps prevent air sac collapse, thereby allowing the infant to breathe easier. Unlike other devices, however, the entire Pumani system costs less than $400 to manufacture—about 6% of the cost of traditional bCPAP devices, according to Rice 360°.

“Our students spent a lot of time designing a machine that would deliver equivalent air flow and pressure at a low cost,” said Maria Oden, director of Rice University’s Oshman Engineering Design Kitchen, who cofounded the BTB program with Richards-Kortum.

Pumani doesn’t humidify the pressurized air to prevent mucosal drying, so attending nurses must administer saline nasal drops instead—a low-tech, low-cost solution. But where the device lacks in implements, it more than makes up for in results, which are the most important aspect of the device, according to Elizabeth Molyneux, MD. Molyneux is a pediatrician at QECH who met Richards-Kortum in 2005 and helped initiate the partnership with Rice 360°.

“It doesn’t have the whistles and flashing lights that are present on more expensive models,” said Molyneux. “We’re providing the bare essentials, but we’re still saving lives. My view is that we should look at what is really needed. So much in our modern world is far beyond what we need.”

Bringing an Idea into the World

Designing the device was only part one of the process. For part two, Rice 360° turned to Northern California-based manufacturing partner, 3rd Stone Design. 3rd Stone partners with research organizations and NGOs to design and develop consumer, medical, and renewable energy products.

The Pumani project is 3rd Design’s third venture with Rice 360°. The first was a microscope designed by a BTB student, followed by a solution called DoseRight, which helps parents administer the accurate dosage of anti-retroviral medicine to their HIV-positive children. A small clip attaches to a syringe and ensures the correct amount of fluid is withdrawn. The DoseRight product has sold more than 400,000 units.

“Too often, inventions are solutions looking for a home,” said 3rd Stone CEO Robert Miros, “When college students want to invent something to save the world, they need to think about how it fits into the manufacturing process: the cost of goods, the assembly line work flow, the supply chain, the restocking of reusable elements, if it makes business sense. We understand the process by which a good idea moves out of a university setting and into a viable product.”

In the case of Pumani, the only maintenance cost is the biannual replacement of a diaphragm that costs less than a dollar. “We made Pumani with durability in mind because it conceivably has to travel from one side of the planet to the other. Plus, it will be repeatedly sterilized with caustic bleach, so it was built to withstand that sort of treatment,” said Miros.

He added that, generally, in developing countries “there are skilled technicians who know how to fix the device, but they just don’t have the necessary components to do so. In order for a product to have a long life, you have to consider parts” and power sources.

Miros traveled to QECH in Malawi because it was crucial for him to go on-site to “see what kind of shelf Pumani is placed on, what are the light conditions, portability issues, if there’s sufficient space to move around it, and to talk with the nurses and doctors who provide invaluable feedback.”

In 2011, the Pumani project was awarded a seed grant from Saving Lives at Birth: A Grand Challenge for Development, a joint initiative of the United States Agency for International Development (USAID), the Bill & Melinda Gates Foundation, the World Bank, and other organizations. The grant allowed Rice 360° to conduct a clinical study of its bubble CPAP device.

QECH tested Pumani on a 6-month-old with bronchitis and a neonate with respiratory distress due to congenital pneumonia. Within an hour of beginning Pumani treatment, the baby’s oxygen saturation improved from 60% to 100%, while the neonate’s increased from 55% to 93% in 4 hours.2

Meanwhile, a follow-up study3 of 87 neonates suffering from respiratory distress at QECH found that the survival rate for the Pumani group was 71%, compared to 44% for the control group, which received nasal oxygen (see Figure 1). Of the 29 very-low-birth-weight neonates receiving Pumani, 19 (65.5%) survived to discharge, compared with only 1 of 13 (15.4%) who received nasal oxygen.3 Figure 2. Survival of participants with RDS and sepsis receiving nasal oxygen vs bCPAP. [3]

”I’ve seen undergraduates grow up,” said Oden, “seeing that what they’ve designed is saving lives on the other side of the planet. It’s very gratifying for me, as a professor, to see students identify problems and then solve them.”

Based on the results, Richards-Kortum and colleagues who participated in the study believe providing low-cost bCPAP, like the Pumani device, in central and district hospitals could prevent 178,000 neonatal deaths3 annually on the African continent, where nearly 1 million babies die each year within a week of birth, according to WHO estimates.4

“While the cost of the bCPAP device has been reduced, the cost and availability of consumables, staff support, and support equipment remain a barrier to scale-up. Nonetheless, implementing such a system has the potential to improve neonatal care and health outcomes in low-resource settings,” Richards-Kortum and colleagues commented in a 2014 report on the clinical trial.

The project’s success has garnered significant attention for the Rice 360° program. In June of last year, Oden and Richards-Kortum received a $100,000 Lemelson-MIT Award for Global Innovation. Using the grant, the pair created the Day One Project, a Rice 360° initiative that will build a new neonatal ward at Queen Elizabeth Central Hospital. The goal for the neonatal unit is to provide “excellent care to the world’s most vulnerable babies, while serving as an innovation hub for affordable, high-performance technologies that can improve care for newborns throughout the region,” according to information on the project’s website. Including the $100,000 from Oden and Richards-Kortum, the project has fund-raised a total of $339,928.5

Rice 360° also has another ongoing venture with 3rd Stone Design for a solution to apnea of prematurity, in which infants stop breathing during sleep. Developed by BTB students, the BabaLung Apnea Monitor detects cessation of breath and stimulates the infant to resume breathing. If the infant does not take a breath for 20 seconds, a vibrating motor stimulates breathing. “BabaLung is still in development and optimization,” said Richards-Kortum. “We’ll take it to Malawi when the technical performance has been improved.”

Rice 360° also hopes to expand the impact of its bubble CPAP device beyond Malawi. Beginning in July 2014, Pumanis and trainers will head for district hospitals in South Africa, Tanzania, and Zambia, where newborns and families can expect the same life-saving results as those at QECH.

“My colleagues are enormously grateful for another tool to help babies who might otherwise die,” said Molyneux, who recounted the story of one grandparent who was convinced her grandchild was going to die, so she gave it the name “Chokonjetsa,” which means “thrown away.” The grandmother resisted using the Pumani device, but the baby’s mother was convinced it would help. Now 6 months old, Chokonjetsa is a happy “fat, little baby,” according to Molyneux.

“The mothers are so grateful because the babies they felt for certain would die are alive,” said Molyneux.  “This is a wonderful thing.” RT

3. Kawaza K, Machen HE, Brown J, et al. Efficacy of a low-cost bubble CPAP system in treatment of respiratory distress in a neonatal ward in Malawi. PLOS One. 2014;9(1). Accessed here. 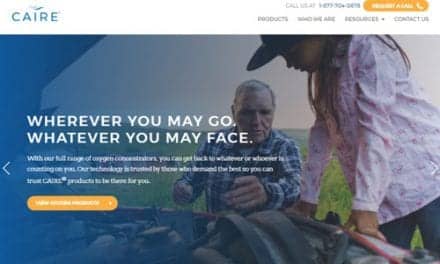 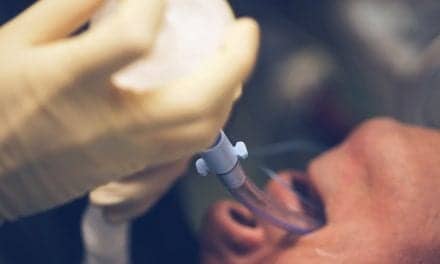