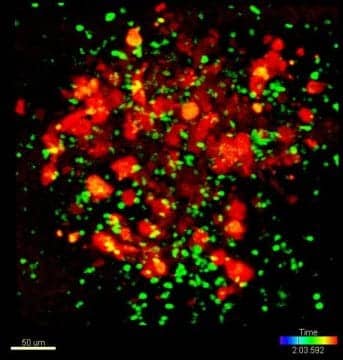 One goal of immunotherapy is to rally a patient’s often over-burdened immune cells to effectively attack a tumor. Among foot soldiers on the immune front line is a subpopulation of white blood cells called “patrolling monocytes,” whose job is to cruise the bloodstream, cart off cellular debris, and block invasion of a less benign population of inflammatory cells.

Previously, researchers knew these white blood cell scavengers played a beneficial role in counteracting inflammation in the context of atherosclerosis. Now, a study from the La Jolla Institute for Allergy & Immunology (LJI) illustrates that patrolling monocytes may also play an anti-cancer role, particularly in the lung. In it, Catherine C. Hedrick, PhD, and colleagues track the wanderings of these cells in the lung vasculature, film them pursuing invading tumor cells, and employ a mouse model that they developed to demonstrate how effective this pursuit is in a living animal.

That study, published in the October 22, 2015, online edition of Science, is the first to show that that patrolling monocytes directly block lung metastasis, findings that could suggest future immunotherapies to treat an extraordinarily lethal cancer.

“Our study shows that this subgroup of white blood cell is a key player in orchestrating the killing of metastasizing tumor cells,” says Hedrick, a Professor in the Division of Inflammation Biology. “These cells recognize and could help destroy early metastasizing tumor cells in the blood, even before they can invade new tissues and form new tumors.”