Nothing inhibits technique like stress. Even in the safe confines of the 10,000-square-feet Johns Hopkins Medicine Simulation Center, medical students feel the heat.

As a 16-year veteran of the Johns Hopkins Health Care System, Amber Kelly, CPFT, EMT, has seen her share of high-stakes procedures on the youngest of patients. In her new role as simulation technician at the JHU Simulation Center, Kelly finds that clinicians-to-be feel plenty of pressure even during practice scenarios.

CPR, for example, may involve mannequins and a by-the-numbers approach, but errors tend to pile up when the tension builds. “When students are in the heat of the moment, they think they are right on,” says Kelly, who comes from a clinical position in pediatric pulmonary. “When they view themselves afterward, they are often very surprised to see they could have done better.”

Meanwhile, digital video captures every moment. If the bag-mask ventilation is too fast, there is little room for argument. “The proof is in the video playback,” says Kelly. “There is no dispute, and we focus on the pros and cons when we debrief after simulation. The majority of learning takes place during reflection with an educator.”

In addition to physicians in training, those studying nursing or respiratory therapy and house staff members are all welcome to learn and practice procedures “on plastic” before interacting with real patients; and while these “patients” may indeed be made of polymers, they are no less complicated.

Not surprisingly, Johns Hopkins University had an excellent simulation process prior to the new center, with many protocols grounded in an established standardized patient (SP) program. While SP simulation has been moved to the new simulation center—which opened in March 2008—the principles remain intact.

Individuals are trained to portray patients, family members, and others to allow students to practice and be assessed for physical exam, history taking, and communication skills. JHU SP program teaching associates carefully train SPs to take on the physical and emotional characteristics of real patients, and SP “actors” are able to imitate the psychosocial behaviors that every clinician may encounter.

Nicole A. Shilkofski, MD, MEd, associate director of the simulation center, remembers the lack of space prior to the opening. Old patient rooms were often pressed into service, and in situ simulation was a necessity. “We did a lot over at the JHU Hospital,” says Shilkofski.

Those days are long gone, and larger projects, such as a recent boot camp for pediatric ICU (PICU) fellows, can now be tackled with relative ease. The camp attracted PICU fellows from JHU, as well as from other East Coast fellowship programs, for a 3-day course. “One of the things [the fellows] learned to do was to seek organ donation consent from parents after a child had been declared brain dead,” says Shilkofski, who also serves as medical director for the Hopkins Outreach for Pediatric Education (HOPE) Program. “Sadly, this is something they have to do quite commonly. As you can imagine, this might be quite intimidating to do in real life without having practiced it first and then … [receiving] feedback on their communication skills.”

The standardized patients are trained actors who pull no punches in their portrayals of powerful emotions. Still other types of “actors” are referred to as “confederates,” and these people may have some medical training and may actually even be the educators.

“If you are doing a cardiac arrest scenario, part of the learning objective would be to manage the patient while there was a parent or worried family member in the room,” says Shilkofski. “How do you multitask and deal with the resuscitation in addition to the presence of a family member?” 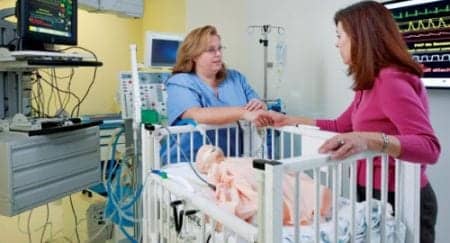 It’s All About Communication

On the technical side, talent and intelligence will go only so far if not accompanied by good communication. Team interaction in the sim center often identifies the dreaded “thin air” communication, which helps no one, least of all the patient. “There are potentially 15 people in the room functioning as part of the team, and the team leader will say, ‘We need to intubate, we need epinephrine, and I need a laryngoscope blade,'” says Shilkofski. “These may be necessary, but they are not tasked specifically to any one person. That is why we call it ‘thin air communication,’ because requests are spoken into the thin air, and no one is tasked to either do that procedure or obtain the necessary equipment—so often it does not happen and does not get done.”

With high stakes teams such as resuscitation or trauma, the solution is closed loop communication and emphasizing the importance of delegating tasks and following through on requests. “We see poor communication repeatedly, regardless of what level of learners or what discipline of learners come here,” says Shilkofski. “Communication is a common error that we see.”

A Place for In Situ 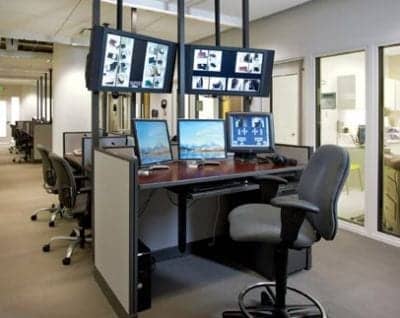 Despite a gleaming new facility, Shilkofski and her team members do not hesitate to venture out of the friendly confines. In fact, in many cases it is the more effective tactic. “We have recognized it is sometimes better to bring the simulators to the point of care, as opposed to bringing the learners here to the sim center,” says Shilkofski. “We have this lovely facility, and it is a great space, but quite often now we are finding ourselves bringing the mannequins back to the hospital.”

As true believers in the educational methods of simulation, they are all part of the Hopkins mission to adapt to what works. Occasionally, that means getting out of the controlled, sterile environment. In the case of care providers training to transport patients by helicopter, that philosophy has proven to be far more effective.

Ultimately, the simulation center could not mimic the setup that these providers used at the point of care. “We can put them in a room and make the environment as realistic and high fidelity as possible, but the psychological fidelity or environmental fidelity may not be there because they may not experience some of the disruptions that they would during transport in a helicopter,” explains Shilkofski. “This year we brought the mannequins into our actual helicopters and took them up and flew around so that the care providers experienced how noisy it is in a helicopter, and how the equipment interacts in the enclosed space. They had to function and communicate via radio because of the extreme noise.”

Another advantage of in situ training is the element of surprise. “When students come to the sim center, they know that they are coming for a training session,” says Dru Holehan, academic program manager. “When we run these in situ, the team responding does not necessarily know it is a mannequin when they first arrive. They think it is a real life situation.”

All these factors (in situ or in the facility) are now taken into consideration before a course begins, when instructors decide on educational objectives and set measurement standards. The main goal is straightforward: create better doctors and health professionals.

It is a rigorous program to be sure, and medical programs around the country, and even the world, are watching carefully. Relatively young organizations such as the Society for Simulation in Healthcare have sprouted up to discuss the continuing evolution of simulation.

The International Meeting on Simulation in Healthcare began on January 21, 2011, in New Orleans (www.ssih.org), and many of the Hopkins staff have attended the meetings in the prior 6 years. “We have seen a huge increase each year in the number of multidisciplinary care providers and educators who attend,” says Shilkofski. “That is reflective of a national trend that is incorporating simulation into all facets of education, and all levels of health care—whether it be respiratory therapy, nursing, or pharmacy.”

The almost 3-year-old Johns Hopkins Medicine Simulation Center is across the street from the Johns Hopkins University (JHU) Hospital, and connected to the 100-plus-year-old Baltimore facility by tunnels. It’s a 5-minute walk away, but there is still a bit of room to build a new edifice that would only require a slightly more lengthy stroll.

Why wish for another facility when the current one opened in March 2008? The short answer is that demand for the space has been intense from the start, and that shows no sign of slowing. Many of the training events that used to take place at different places on campus, and at the hospital, are now under one roof.

The new facility makes everything more cost-effective and convenient, but word has spread beyond JHU. “We also accommodate some of the surrounding medical teaching institutions such as Georgetown University and George Mason University in Maryland,” reveals Holehan. “We charge them to recoup our expenses.”

According to Nicole A. Shilkofski, MD, MEd, the simulation center has also offered its considerable resources pro bono to improve the state of emergency medical services for the state of Maryland. “We have provided training to paramedics and EMTs who work for the Maryland State Police,” explains Shilkofski, associate director of the Johns Hopkins Medicine Simulation Center, and medical director of the Hopkins Outreach for Pediatric Education (HOPE) Program. “That has included pediatric advanced life support training with our mannequin simulators, in addition to free space and resources for EMS services, medics, and flight crews.”

Capital funding for the $5 million simulation center came from the School of Medicine, with key donors instrumental in acquiring some equipment. An ongoing operational budget is jointly supported through the university and the hospital. “We are looking to expand another 10,000 square feet,” says Holehan. “When we first opened, it was sufficient space, but utilization has increased so much that we are lobbying for more space on the School of Medicine campus.”