A 54-year-old female was admitted to the emergency department of a major university medical center with sudden onset of extreme fatigue, tachycardia, and indigestion followed by nausea and vomiting. The initial clinical differential diagnoses included acute coronary syndrome and cholecystitis. Laboratory tests, ECG, and an abdominal CT scan were among the diagnostic studies ordered. Shortly after admission, the patient complained of pain that migrated from her shoulder to her back, and she was noticeably diaphoretic. Before all the diagnostic tests were completed, the woman was prepped for an emergency cardiac catheterization with the potential for balloon angioplasty and stenting. In anticipation for the procedure, a combination of aspirin and the platelet inhibitor clopidogrel was administered as per the American Heart Association’s ACS guidelines. While en route to the cardiac catheterization laboratory, the result of the abdominal CT scan was reported. It proved positive for acute cholecystitis with blockage of cystic duct. The patient was diverted from the catheterization laboratory to the operating room where a laparoscopic cholecystectomy was performed.

Postoperatively, the patient was transferred to a room on the medical/surgical wing for recovery and routine care. Six hours after surgery, the patient’s breathing pattern was moderately labored with a respiratory frequency of 22/min, heart rate of 120/min, blood pressure of 110/80 mm Hg, and an Spo2 on room air of 94%. A physical exam revealed increased abdominal swelling and tenderness around the incision site and right upper quadrant. The patient was administered low doses of morphine and diazepam to treat the pain and anxiety. Two hours later, the patient’s heart rate increased to 130/min, blood pressure dropped to 102/70 mm Hg, ventilation increased to 30/min with diminished breath sounds, and the Spo2 on room air decreased to 90%. A nasal cannula at 3 LPM and routine respiratory care for postoperative deep breathing maneuvers were started.

Over the course of the next 3 hours, the patient’s vital signs and dyspnea continued to deteriorate. An arterial blood gas was ordered on the nasal cannula with the following results: pH 7.51, Paco2 25 mm Hg, Pao2 78 mm Hg, and Sao2 95%. The patient was administered another dose of morphine and diazepam, and transferred to the surgical intensive care unit for observation. An hour later (12 hours post-op), the patient complained of intense abdominal pain and extreme dyspnea, and her blood pressure fell to 82/56 mm Hg with a heart rate of 138/min. Reexamination of the surgical site noted evidence of significant abdominal distention. The nasal cannula flow rate was increased to 5 LPM and additional lab tests were ordered. A blood gas panel and hemoglobin/hematocrit tests reported: pH 7.53, Paco2 23 mm Hg, Pao2 71 mm Hg, Sao2 94%, Hb 7.2 g/dL, and Hct 21.6%.

The patient was immediately returned to the operating room for evaluation, during which a punctured blood vessel at the surgical site was identified, complicated by the previously administered aspirin and clopidogrel, resulting in a postoperative bleeding event. Following repair, the patient received a transfusion of one unit of packed cells. Within the next 30 minutes, her dyspnea subsided and all vital signs returned to normal levels. The patient was discharged without further complications on the fourth postoperative day.

The events described in this case presentation represent a classic postoperative complication that was compounded by anemic hypoxia. During the postoperative course, the patient’s dyspnea was monitored with blood gases (Pao2) and pulse oximetry, but because the reported results were within clinically acceptable ranges, significant hypoxemia was inappropriately ruled out. In view of the fact that the underlying etiology of this patient’s hypoxemia was a reduced number of red blood cells, it is clear that a test that only measures plasma, eg, Po2, will be incapable of detecting the oxygen deficit.

Analysis of %O2Hb was also unable to monitor the effects of anemia. Measurements of the fractional oxygen saturation (F O2Hb) or the estimated functional oxygen saturation (Sao2 or Spo2), are tests that calculate the ratio of O2Hb to the total hemoglobin concentration. A patient could have a 94% F O2Hb result based on a tHb of 15 g/dL, of which 14.1 g/dL is O2Hb, or a tHb of 7.2 g/dL, of which 6.8 g/dL is O2Hb. Both of these examples will report the same result. Since the F O2Hb, Sao2, and Spo2 tests report O2Hb as a percentage of the tHb, if the absolute value for tHb is unknown, wrong assumptions and an invalid interpretation of results can occur.

Studies of Pao2 and oxyhemoglobin concentration may prove effective in the evaluation of hypoxemia due to V/Q mismatch; however, these tests do not detect anemia as a source of reduced oxygen transport. A complete assessment of a patient’s oxygen status must include the contribution of hemoglobin and the calculation of oxygen content (ctO2). 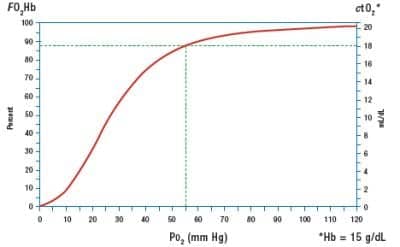 Oxygen is carried in the plasma as dissolved gas (Po2) and bound to the hemoglobin molecule as oxyhemoglobin (O2Hb). In the absence of disease, Pao2 is proportional to the inspired partial pressure of oxygen and is minimally impacted by age. When equilibrated with blood, 0.003 mL of oxygen is dissolved in 100 mL plasma. Simultaneously with the plasma-oxygen loading, oxygen binds covalently and reversibly with hemoglobin that is contained within red blood cells at 1.36 mL of oxygen per gram of Hb, forming O2Hb. The sum total of oxygen carried by blood is transported by cardiac output to body tissues to engage in cellular metabolism, integral to the transformation of ADP to ATP. Although Pao2 and O2Hb are involved in aerobic metabolism, their contributions related to oxygen delivery are disproportionate. Evaluation of the oxygen content formula demonstrates the magnitude of hemoglobin’s oxygen-carrying potential.

Where: tHb = total hemoglobin concentration in g/dL, 1.36 represents volume of oxygen in mL bound by 1 g of Hb (Hüfner’s number), F O2Hb = fractional %O2Hb, Po2 = partial pressure of oxygen dissolved in plasma expressed in mm Hg, and 0.003 = the conversion of 1 mm Hg of dissolved oxygen in plasma to the proportional volume in mL/dL.

Using a set of normal arterial values for calculating ctO2, it can be determined that hemoglobin contributes to 99% of the total oxygen carriage load. 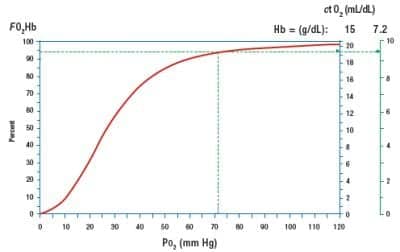 Examination of Figure 1 identifies the traditionally accepted markers of moderate hypoxemia: Pao2 =55 mm Hg, F O2Hb =88%, and ctO2 =18 mL/dL. The sigmoidal shape of the curve maintains its relative shape and position, assuming there are no significant physiologic variants in pH, temperature, or 2,3-diphosphoglycerate levels. In this depiction of the curve, a hemoglobin concentration of 15 g/dL is used in the formation of the ctO2 scale.

Figure 2 identifies the patient’s oxygen parameters reported in the case presentation prior to surgical correction of internal bleeding. The 71 mm Hg Pao2, 94% F O2Hb, and a corresponding 19.4 mL/dL ctO2 (if the tHb was 15 g/dL) could be interpreted as mild hypoxemia, considering the administration of the supplemental oxygen. However, the patient’s actual tHb was 7.2 g/dL, which yields a ctO2 of 9.4 mL/dL, revealing a severely hypoxemic state.

Calculation of ctO2 is best accomplished with results obtained from an arterial blood specimen analyzed with a hemoximetry or CO-oximetry test panel. Direct spectrophotometric analysis of the derivatives of hemoglobin provides the most accurate and precise method of diagnosing anemic hypoxia. The test panel includes fractional concentration of oxyhemoglobin (FO2Hb expressed as a percent), reduced hemoglobin (%HHb), carboxyhemoglobin (%COHb), and methemoglobin (%MetHb). The sum total of these hemoglobin derivatives yields the total hemoglobin concentration. Some manufacturers of blood gas analyzers have integrated multi-wavelength spectrophotometry into their instruments. With these devices, all variables needed to calculate the ctO2 formula can be obtained. Another design of a CO-oximeter is the stand-alone analyzer, lacking the capability of Po2 analysis. These instruments are still capable of providing acceptable ctO2 calculations. Unless the Po2 value is in the range produced by hyperbaric oxygen therapy, it can be assumed that the maximum plasma contribution of the ctO2 calculation is 1% to 2% and, thus, is clinically negligible.

In the evaluation of anemia, uncomplicated by dyshemoglobins, eg, COHb and MetHb, the total hemoglobin concentration measured by a standard laboratory analyzer combined with the Pao2 and estimated Sao2 reported from a blood gas analyzer can be used to calculate ctO2. The blood sample analyzed for these tests should come from the same specimen. Although this method of ctO2 calculation is less optimal than CO-oximetry, results should be clinically accurate and acceptable for patient monitoring. However, this method of ctO2 calculation must be conducted with caution. In the presence of COHb and MetHb, results will be erroneously high, and interpretation may lead to inappropriate patient care.

Carbon monoxide toxicity and methemoglobinemia are other etiologies of anemic hypoxia that require ctO2 evaluation to effectively diagnosis and monitor therapeutic progress. Unlike anemia where FO2Hb does not contribute to the evaluation, FO2Hb is invaluable to accurately detect the hypoxemic effects related to dyshemoglobins. As previously described, Pao2 is a plasma-based test and therefore ineffective in evaluating hemoglobinopathies. The Sao2 and Spo2 tests produce an estimated %O2Hb result based on the assumption that dyshemoglobins are not present in the specimen. These tests will report inaccurate results—higher than actual—in these clinical conditions because of their inherent design. Pathologies that elevate %COHb and %MetHb require direct measurements using hemoximetry or CO-oximetry analyzers and the assessments of ctO2 and FO2Hb to properly guide therapy. Testing of Pao2, Sao2, and Spo2 in patients suffering from carbon monoxide toxicity and methemoglobinemia can result in misdiagnosis and delay appropriate patient management.

In the mid 1960s when blood gas analyzers became commercially available, the arterial blood gas panel (pH, PaCO2, and Pao2) became the primary laboratory test in the diagnosis of pulmonary diseases. The Pao2 test is a sensitive indicator of V/Q, and when the result is integrated into equations and monitoring indices, it can grade the severity of lung dysfunction and plot the response to oxygen and ventilator therapy. These applications of the Po2 measurement have proved to be invaluable in guiding acute and critical care management but ineffective and misleading in the diagnosis of anemic hypoxia.

During the mid 1970s when pulse oximetry gained popularity, patient-driven protocols and therapeutic goals to achieve specific Spo2-related targets emerged. These patient management schemes have empowered the respiratory care practitioner and other bedside clinicians to rapidly assess and correct hypoxemic episodes. Once anemic hypoxia is ruled out, the Spo2 measurement can noninvasively trend the dynamic changes in the patient’s oxygen status as therapy is applied. However, interpretation of these tests alone, without the corresponding tHb data, cannot properly evaluate the patient’s condition.

It is noteworthy that many individuals with chronic metabolic disorders and patients who are receiving long-term ventilatory support because of failure to wean are anemic. Consideration in addressing the oxygen-carrying capacity of these individuals may prove beneficial in reducing the level of dyspnea and increase their exercise endurance. In the subset of patients with polycythemia secondary to chronic hypoxemia, this population may appear less dyspneic than those who experience acute respiratory insufficiency, even with matching Pao2 and Spo2 values. This observation is partially attributed to a substantially elevated ctO2, even though Pao2 and Spo2 indicate moderate hypoxemia.

The true case presentation reviewed in this article demonstrates the limitations of the blood gas test panel and pulse oximetry to evaluate anemia as a source of hypoxemia. Complete assessment of oxygen status must include but is not limited to the triad of Pao2, F O2Hb, and ctO2. Serial monitoring of ctO2 in this patient’s case may have prompted quicker surgical attention to seek a corrective solution. Unless the cause of dyspnea has been identified, calculation of ctO2 should be included in the initial assessment of hypoxemia, and when Pao2 or Spo2 results are not consistent with the patient’s clinical condition. Failure to detect anemic hypoxia as the root cause of dyspnea can significantly increases the risk of untoward outcomes and negatively impact morbidity and mortality. 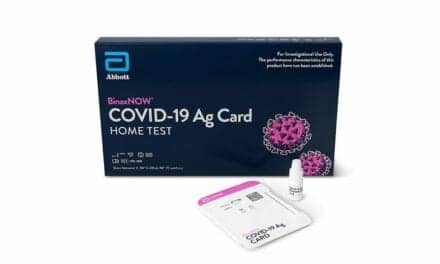 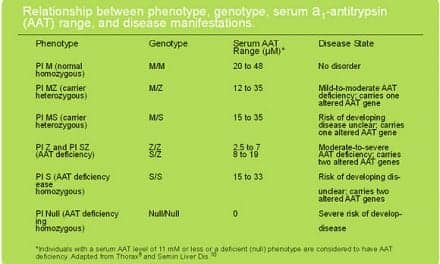