Out with the Old, In with the New: The ATS/ERS Standardization Statements 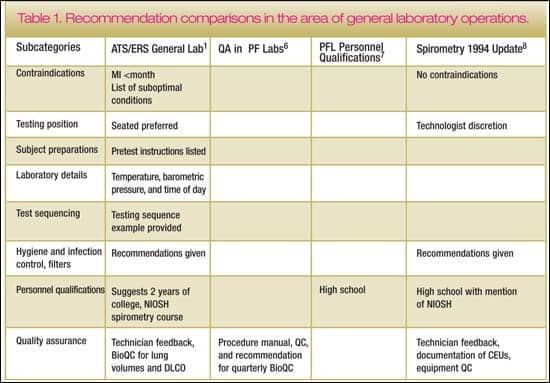 The American Thoracic Society (ATS) and European Respiratory Society (ERS) published their joint consensus statements on pulmonary function testing in fall 2005,1-5 and they are available on the [removed]ATS Web site[/removed]. Most vendors have now updated their software to incorporate the new recommendations, but many of the recommendations are process oriented and need to be integrated into laboratory practice by the laboratory management team or staff. In this article, we will compare the ATS/ERS general considerations1 and spirometry2 guidelines with previously published recommendations.

The newer general considerations statement provides guidance on patient pretest conditions that were not mentioned in the earlier recommendations. These include not testing subjects within 1 month of a myocardial infarction (MI), since the test can be physically demanding, and also listing several conditions that might cause suboptimal results: chest or abdominal pain, oral or facial pain exacerbated by a mouthpiece, stress incontinence, and dementia or confused state.

The new guideline states that subjects can be tested in either the sitting or standing positions, although testing in the seated position is recommended for safety reasons in order to avoid falling due to syncope. Previous recommendations discussed the efficacy of testing in the sitting and standing positions but did not specify a preferred testing position. The measurement of height also is thoroughly discussed in the new guideline, noting that height should be measured without shoes, feet together, with the eyes level and looking straight ahead. Personally, I often share anecdotal scenarios about the inaccurate measurement of height, a measurement that certainly affects the quality of test results. Subjects with a thoracic cage deformity (eg, kyphoscoliosis) should have their height estimated using arm span and a regression equation or fixed correction factor to estimate original standing height. Knee height also can be used for handicapped individuals whose arm span would be difficult to measure.1

The ATS/ERS guideline suggests a possible sequence for performing the more common tests associated with a complete PFT, noting that the order for performing lung function tests should take into account the workflow in the laboratory, potential influences of one test on another, and the ability of the subject to perform the test. In particular, there is the deviation from previous recommendations regarding the performance of diffusing capacity after the administration of the bronchodilator agent. Earlier recommendations stated this was inappropriate, noting an effect on DLCO secondary to an increase in cardiac output; whereas the new statement says current bronchodilators have little effect and may allow approximately 10% of subjects who otherwise would not be able to perform a diffusing capacity to achieve acceptable results.

There is significant discussion concerning hygiene and infection control, which further expands on the discussions in the 1994 spirometry statement, but essentially focuses on the use of standard precautions and appropriate equipment maintenance. In the ATS/ERS recommendations, there is also a fairly comprehensive review of the use of in-line filters. The committee does state, “[I]n the absence of evidence for infection transmission during pulmonary function testing, and the absence of a clear-cut benefit, the regular use of in-line filters is not mandated.” The committee states, however, that laboratory directors often routinely use in-line filters to reassure patients and laboratory personnel that their protection has been considered.

The final discussion in the new general considerations statement is devoted to personnel qualifications and the role of the technologist in quality control. The ATS/ERS committee recognized that pulmonary function testing equipment and procedures have become considerably more complex in recent years. Because of this, it recommends that completion of secondary education and at least 2 years of college education be required so candidates can fully understand and fulfill the complete range of tasks undertaken by a pulmonary function technician. This is an expansion of the educational recommendations made in the 1986 statement on personnel qualifications7 and the 1994 spirometry guideline,8 in which a high school education with an aptitude in science was the only requirement. The ATS/ERS statement also mentions the availability of National Institute for Occupational Safety and Health (NIOSH) spirometry training courses as a method of acquiring and maintaining competency in spirometry testing. The statement also notes that laboratory directors should consider the benefits of formal training programs from outside providers as a mechanism for ensuring staff competency. The committee recognizes that the most important component in successful pulmonary function testing is a well-motivated, enthusiastic technician and the positive effects of giving technologists feedback on testing quality. Numerous suggestions for feedback were cited, including providing constructive feedback to the technologist on a routine basis, in particular when the acceptability and repeatability criteria were not achieved.

The predecessors to the new spirometry recommendations are the spirometry guidelines published in 19879 and 1994,8 and there are five fundamental changes: quality control, end of test criteria, acceptable versus usable curves, repeatability criteria, and reversibility testing.

Calibration of both volume-based and flow-based spirometers using a 3 L syringe is still a key component of the quality control process, with the accuracy criteria now defined as ±3.5% or 65 mL, whichever is greater. This is only a minor change from the prior statements and incorporates the accuracy requirement of the syringe (±0.5% or 15 mL). The new ATS/ERS statement also differentiates the quality control program for a volume spirometer and a flow-measuring spirometer—most notably in the linearity checks for the different types of spirometers. The new guideline recommends that the volume linearity check should be performed quarterly using one of two techniques, whereas the linearity check for flow spirometers should be performed weekly. I found the table that lists the equipment quality control, to be somewhat confusing. It shows that flow linearity is to be performed weekly, which I think could be misleading to some practitioners. The volume calibration of a flow-measuring device still needs to be performed daily using the three standard flow profiles (slow, medium, and fast), whereas linearity testing of a flow-measuring device, which is performed slightly differently, is performed weekly.

The end-of-test criteria are characterized by two recommendations: 1) The subject cannot or should not exhale further; and 2) the volume-time curve shows no change in volume (<0.025 L) for >1 second, and the subject has tried to exhale for >3 seconds in children ≤10 years of age, and for >6 seconds in subjects >10 years of age. 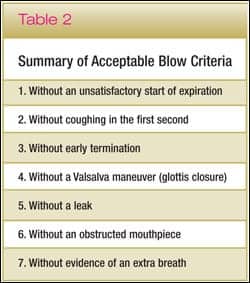 The next fundamental change—and probably the one change that has the biggest impact on testing practice—is the repeatability criteria. The new standard is <150 mL for both FEV1 and FVC, unless the FVC is less than 1.0 L, then it is <100 mL. Although these criteria are tighter than the 1994 standard of <200 mL, they should still be obtainable. Enright et al10 published data from the Mayo Clinic’s PF Laboratory on 18,000 consecutive patients, 20 to 90 years of age. Ninety percent of the patients were able to reproduce FEV1 within 120 mL (6.1%), FVC within 150 mL (5.3%), and PEF within 0.80 L (12%). This is the one new recommendation that is not process oriented and should be in most vendors’ software at this time.

The final significant change from the previous recommendations is the bronchodilator dose used when accessing reversibility. This topic was not addressed in previous statements and might be one of the more controversial recommendations in the guideline. Simply put, after three acceptable and repeatable maneuvers are performed, four separate doses of 100 µg (total dose 400 µg) are delivered at 30-second intervals via a spacer device. This dose ensures that the response is high on the albuterol dose–response curve. A lower dose may be used if there is concern about any effect on the patient’s heart rate or tremor. For the anticholinergic agent ipratropium bromide, the total dose is 160 µg (4 x 40 µg). The FVC maneuvers are repeated after 10 to 15 minutes for short-acting ß2-agonists, and 30 minutes for short-acting anticholinergics. The reasoning given for the use of an MDI and spacer versus a nebulizer is for standardization of the bronchodilator delivered, reducing the variability in the definition of a significant bronchodilator response. The controversy may not be in the method of delivery, however, but in the choice of a dose (four inhalations versus two inhalations), which is larger than the recommended dose in routine care.

“Today the only thing that is permanent is change”—Charles H. Mayo

Charlie Mayo, one of the founding brothers of the Mayo Clinic, made this statement almost 70 years ago and it still holds true today. The new ATS/ERS statements incorporate numerous process recommendations that diagnostic practitioners need to discuss with their medical directors and make the decision to either abstain or implement them into laboratory practice. Regardless, it is the responsibility of pulmonary diagnostic practitioners to be familiar with the new standards and be leaders in these decisions, which certainly will have an effect on the quality of data collected and the downstream patient care that is recommended based on those data.