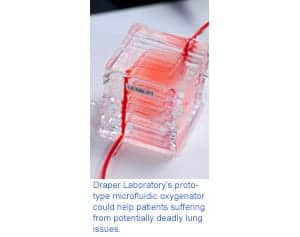 A new device being developed by Draper Laboratory seeks to improve upon the concept of extracorporeal membrane oxygenation (ECMO) and hopes to one day offer a safer option for patients experiencing acute respiratory distress syndrome (ARDS) or other conditions requiring mechanical ventilation.

Draper’s “microfluidic oxygenator” mimics human circulatory networks, including their smooth, gradual changes in channel dimension and lack of sharp corners, according to the company. Once successfully tested and approved for human use, clinicians could prescribe the system for patients in both in- and out-patient settings.

“Microfluidic technologies have shown promise for small-scale lab-on-a-chip applications, but the Draper project shows for the first time how microfluidic devices can be scaled for high blood flows required for acute interventions and chronic support,” said Jeff Borenstein, Draper Laboratory’s principal investigator for the project, which is funded by the National Institutes of Health’s National Heart, Lung and Blood Institute.

Borenstein equates the traditional use of mechanical ventilation for patients experiencing ARDS with asking someone to “exercise a broken arm,” according to an article by MIT Technology Review. He explains that ventilation can involve forcing high concentrations of oxygen into the lungs at high pressures, which does not allow the diseased or damaged tissue to heal. It can also lead to lung tissue toxicity and pneumonia.

Draper’s microfluidic oxygenator is similar to ECMO, which draws out a patient’s blood and runs it through a device that removes carbon dioxide and adds oxygen to it before returning the blood to the patient’s body. However, current ECMO technology is structurally unlike the natural lungs and can lead to blood clots in the device, which may lead patients to be prescribed large doses of anti-clotting medication.

However, Draper describes its own device as solving that problem by building a “three-dimensional branching structure” in which larger channels gradually branch into smaller ones similar to the way larger blood vessels branch into capillaries, according to the MIT Technology Review article.

Borenstein and his team have demonstrated blood oxygen transfer rates in the laboratory using bovine blood that indicated that the device can be scaled for human clinical use. According to the company, if things go as planned, it will be ready to test in animals in two years, and ready for human testing in three,  David O’Dowd, program manager for biomedical systems at Draper, told MIT Technology Review.

Nutrition and the Critically Ill Patient