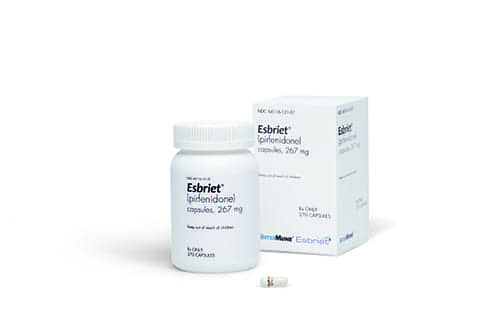 An international group of researchers found that continued treatment with (pirfenidone) Esbriet had positive benefits for patients with idiopathic pulmonary fibrosis.

The investigators, led by Steven D. Nathan of the Advanced Lung Disease and Transplant Program, Inova Fairfax Hospital, Virginia, wanted to understand the variability of IPF disease progression and whether pirfenidone should be continued in patients with IPF who have substantial disease progression despite treatment.

Study subjects included 1,247 patients enrolled in the ASCEND and CAPACITY clinical trials, which assessed the effectiveness and safety profile of pirfenidone in IPF. The researchers focused on forced vital capacity (FVC), a measurement of lung function when a person exhales with as much force as possible. They identified patients who experienced a 10% or greater decline in FVC within a six-month period. They then assessed the number of individuals in a group receiving pirfenidone, and in a group receiving placebo, who experienced an additional 10% or greater decline in FVC or death in the following six?months.

The scientists found that in those IPF patients with a 10% or greater decrease in FVC within the first six?months of treatment, maintaining pirfenidone treatment diminished risk of another 10% or more decline in FVC or death when compared to a placebo.

“Our findings provide the first available evidence to suggest that continued treatment with pirfenidone may confer a benefit to patients with idiopathic pulmonary fibrosis who exhibit evidence of meaningful disease progression during treatment,” the researchers concluded.