A new study of microorganisms published in mBio found two predatory bacteria in the lungs of cystic fibrosis patients which were not detected before: Vampirovibrio and Bdellovibrio.

Using a laboratory technique called next-generation sequencing, a group of investigators from Madrid, Spain, studied the bacterial makeup of sputum samples provided by 15 cystic fibrosis patients three to four times over the course of a year. They found a wide range of bacterial species in the samples, including Pseudomonas aeruginosa, Staphylococcus aureus, Burkholderia and Pandorea. Each patient had his or her own bacterial makeup that remained relatively steady over the study period.

What surprised researchers was also finding two types of predator bacteria among the samples. Vampirovibrio, a bacteria that destroys cells by sucking out its contents, was found in 17 samples from 12 patients, while Bdellovibrio, which enters cells and feeds on its proteins, was found in six samples from three patients. The two types were found together in only one patient. 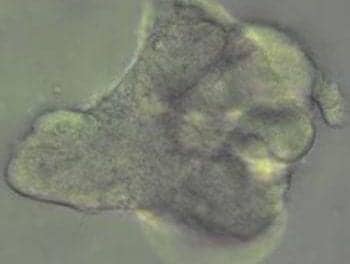