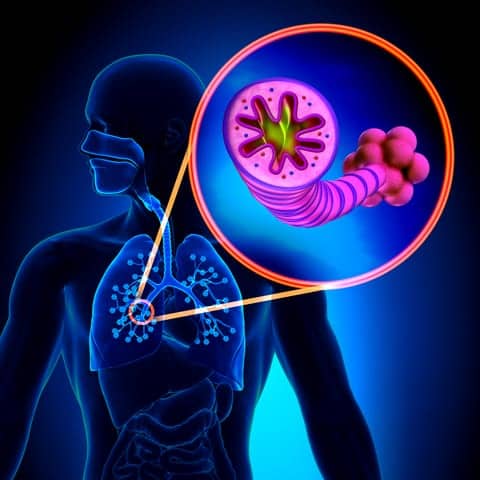 In a study of 2,489 adults with COPD, gastroesophageal reflux disease (GERD), certain scores on the St. George’s Respiratory Questionnaire (SGRQ), and being female were specific risk factors associated with exacerbations of COPD in participants using long-acting controller medication. A news release from the American Thoracic Society (ATS) indicates that researchers aimed to determine the prospective risk factors for acute exacerbations (AE) of COPD among subjects in the COPDGene study that focuses on genetic factors relating to COPD.

Robert Busch, MD, says, “Knowing these factors can help clinicians identify subjects at risk for acute exacerbations of their COPD.”

Adults with COPD on tiotropium (TIO), long-acting beta-agonist inhaled corticosteroids (LABA/ICS), and/or short-acting bronchodilators (SAB) alone or in combination were studied using retrospective data from the COPDGene study and prospective data from the telephone and web-based biannual Longitudinal Follow-Up program, according to ATS. Researchers divided subjects according to medication use groups and exacerbators and nonexacerbators were identified by the frequency of AECOPD.

In multiple medication groups, the presence of female gender, GERD, and higher total SGRQ scores were substantial predictors of exacerbator status. Subjects in the LABA/ICS or TIO groups had similar characteristics, such as 6-minute walk distance and forced expiratory volume in 1 second.

The ATS news release indicates that there was a trend toward significantly lower rates of exacerbations in subjects taking TIO compared with those taking the LABA/ICS combination, which was particularly true in subjects who did not have a physician’s diagnosis of asthma.

Patients, Physicians Not on Same Page with COPD Management