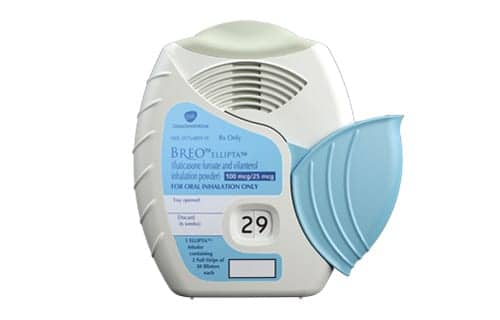 The SUMMIT trial was designed to evaluate the effect of FF/VI 100/25mcg once-daily on all-cause mortality compared with placebo in patients with moderate COPD who had, or were at high risk for Cardiovascular Disease (CVD). Results of the primary endpoint were announced in 2015 and showed that all cause mortality was not affected by combination therapy or the individual components.

The first analysis presented investigated the impact of FF/VI 100/25mcg, an inhaled corticosteroid/long-acting beta2 agonist combination (ICS/LABA), on exacerbations in COPD patients with moderate airflow limitation (mean FEV1 60% predicted). In patients treated with FF/VI100/25mcg the risk of a COPD exacerbation, measured by time to first exacerbation, was decreased by 20% (HR 0.80, 95% confidence interval 0.73 – 0.86) versus placebo. In addition, FF/VI 100/25mcgled to a 29% reduction in the rate of a moderate to severe exacerbation of COPD compared with placebo.

“We believe these data are important for COPD physicians and are clinically relevant,” said Dr Courtney Crim, director Clinical Development, R&D Respiratory, GSK. “These findings from SUMMIT show that COPD patients with moderate airflow limitation experienced both a lower risk of having an exacerbation and fewer exacerbations when treated with FF/VI than patients on placebo. In the same patients with moderate airflow limitation we also saw a similar incidence of pneumonia in patients on FF/VI and those on placebo. In previous studies, in more severe patients, an increase in the incidence of pneumonias has been observed in ICS-containing treatment arms. The finding from this study is therefore interesting and will require further investigation.”