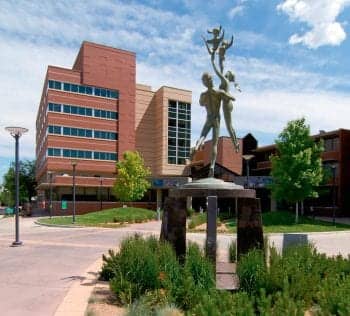 Patients come to Denver-based National Jewish Health when they need the specialty care that the U.S. News and World Report’s #1 ranked respiratory hospital in the United States can offer. With more than a century of service, National Jewish has carved out a niche and a reputation for offering cutting-edge treatment for a host of respiratory diseases. And while RTs working at National Jewish Health might find that the work they do differs little from what RTs at other nonspecialty hospitals do, they are experts in what they do and they are working with experts who are leading the way in COPD, lung cancer care and research, and ARDS.

“A lot of the metropolitan hospitals do [clinical research] as a single team. Essentially, we [the consortium] all combine resources, be they coordinators, scholarship, or protocols, to perform clinical research as a unit. And while [National Jewish Health] is certainly one of the larger sites within that consortium and provides a large part of the faculty expertise, [together we have] tremendous power to do really innovative and cutting-edge research that I don’t think a lot of other facilities could replicate,” says Frankel.

With a long history of participation in some of the key COPD-related clinical research trials, including involvement in almost all the large National Institutes of Health (NIH) clinical trials in the past decade, National Jewish’s participation in the COPDGene® study—under way now—is a logical fit.

While cigarette smoking is often linked to a COPD diagnosis, genetic factors are also suspect—for example, the known link between the alpha1-antitrypsin genetic mutation and COPD—in the development of the disease. The COPDGene study seeks to discover what other heritable or genetic factors contribute to the risk of developing COPD.

Not only is National Jewish Health one of 21 clinical centers nationwide participating in the COPDGene study, it is the primary institution coordinating the study and hosts the data coordinating center. National Jewish’s participation in the COPDGene study is led by James Crapo, MD. He and Edwin Silverman, MD, of Harvard University’s Brigham and Women’s Hospital in Boston, serve as principal investigators. In addition, Barry Make, MD, director of the COPD Program as well as the respiratory and pulmonary rehabilitation programs, at National Jewish, serves as clinical center project leader for the study.

The study has already met its enrollment goal of 10,000 patients ahead of schedule—with National Jewish ranking as the top recruiting center. According to Make, the study population is unique, given that it includes smokers with and without COPD, creating a sort of control group. In addition, one third of the population is African American, another unique feature among such studies.

While the findings of the COPDGene study will not be known for some time, National Jewish has developed what Make calls a “comprehensive” individualized care model for COPD patients currently undergoing treatment.

“By comprehensive, I mean COPD, as we know it, has a lot of other comorbidities associated with it—cardiovascular disease, arthritis, osteoporosis, GI problems. We have all the resources to deal with those problems,” says Make.

But more important, Make points out, working at a specialty hospital, National Jewish staff have the time and resources to find and manage not only the primary disease but underlying conditions.

“Physicians these days are very busy, and generally when primary care physicians see patients, they only have time to address the major problem or one problem at a time. We look at the whole patient. We look at all those other issues as well,” says Make. “So when I say ‘comprehensive’ care, it’s comprehensive in its evaluation as well as its management.”

Getting a Jump on Lung Cancer

When it comes to lung cancer, National Jewish is actively working to discover and implement the best screening options to reduce mortality rates. Recently, National Jewish has been working to implement and expand its screening program, which grew out of the National Cancer Institute-sponsored National Lung Screening Trial (NLST). The NLST found that participants—current or former heavy smokers at risk for lung cancer—who underwent low-dose helical CT scans to detect lung cancer had a 20% lower risk of dying from the disease than participants who received standard chest x-rays.

“This is the first study to show that screening has a substantial impact on mortality,” says James R. Jett, MD, from the division of oncology. “It’s a landmark study that has arguably had the most impact on decreasing lung cancer mortality of anything ever reported, perhaps with the exception of smoking cessation.”

Led in large part by the radiology department, implementation of the screening program has focused not only on identifying patients but also on devising a tracking system and action plans that can handle both internal and external patients. Only after a plan was put in place—how patients would be brought in; who would read the scan; how patients, especially those going through the community-based screening program, would be notified of results; and what follow-up recommendations would entail—did the work of identifying patients begin.

Earlier this year, using National Jewish’s electronic medical records (EMR) and the NLST’s screening criteria (people aged 55 to 74 who have a 30-pack-year history of smoking and are either active smokers or have quit in the past 15 years), the staff worked to identify internal patients. The initial focus on internal patients allowed National Jewish to work out the kinks before rolling out a community-based screening program. The program allows anybody who fits the criteria, regardless of whether they have a physician at National Jewish, to have a screening CT scan.

According to Jett, the next step in lung cancer screening at National Jewish is a prospective nonrandomized trial looking for blood markers that should begin this fall. Participants, who are at high risk for lung cancer based on age and smoking history, will receive a CT scan and a blood test—an autoantibodies against lung cancer antigens panel—to see if positive blood tests correlate with CT scan results.

“The goal,” says Jett, “is to see if adding the blood marker to the CT scan will improve our ability to diagnose lung cancers earlier and at a lower stage.”

Doing the Hard Work With ARDS

When it comes to ARDS patients, National Jewish has been part of the NIH’s National Heart, Lung, and Blood Institute (NHLBI) ARDS Clinical Network for more than 15 years, working to find effective therapy to improve care. Currently, National Jewish is participating in the Statins for Acutely Injured Lungs from Sepsis (SAILS) trial looking at the use of rosuvastatin versus placebo to improve the outcomes of patients with ARDS or acute lung injury. Both the Rose and Swedish sites are currently enrolling participants.

Through Rose Medical Center, National Jewish is also participating in the NHLBI-sponsored GRAIL trial, a randomized, double-blind placebo-controlled trial of ganciclovir/valganciclovir for the prevention of cytomegalovirus (CMV) reactivation in acute injury of the lung, as one of nine participating centers. The study aims to see whether ganciclovir reduces serum IL-6 levels in inmmunocompetent patients with acute lung injury or ARDS.

“Most of us carry CMV, which is a latent virus in the herpes virus family, and that latent virus is particularly prevalent in alveolar epithelium. And when the lungs are acutely injured, it is common for that virus to reactivate,” says Frankel. “We believe that reactivation actually augments and promotes the ongoing inflammatory response, further perpetuating lung injury. The idea is that if you suppress CMV activation, you can improve ARDS outcomes.”

As for day-to-day care of ARDS patients, Frankel says the key is adherence to “proven best practices,” among other things consisting of NIH/ARDS low tidal volume ventilation protocol, the FACTT fluid protocol, and an overall lung protective strategy.

“One of the ways that you can really ensure that you’re going to deploy all the evidence-based best practice is to have it protocolized,” says Frankel. Another key component is having around-the-clock care for those times when a situation demands the staff go off book.

“If there is a compelling reason not to [adhere to protocol], if there are contraindications, then absolutely; and that’s the advantage of having the on-site attending who actually knows the literature and can make an informed decision,” says Frankel.

While most ARDS is a result of severe sepsis or septic shock, pneumonia, aspiration, trauma, or pancreatitis, the fact is, as a specialty hospital, the care team at National Jewish has the expertise to manage those anomalies that might throw another hospital’s staff for a loop.

“We see a lot of what I would call ‘low frequency diagnoses’—the rare things that allow us to distinguish mimics of ARDS more readily than sites that don’t have the opportunity to see those rarer disease states,” says Frankel, citing the staff’s familiarity with alveolar hemorrhage syndromes, vasculitis, and autoimmune disease that can present with bleeding in the lung, mimicking true ARDS. “If a patient presents with an atypical clinical course, we’ve seen enough of these rarer diagnoses to recognize those differences and be able to intervene accordingly.”

In the End Expertise

Specialty expertise—the fact that the staff has seen both the typical and atypical presentations more than once—has secured National Jewish’s reputation as the top respiratory hospital in the country. And it’s an expertise that extends beyond the physicians.

“The expertise is not just in the physicians,” says Make. “It’s in all the other employees. Everybody [the patient] sees, all the employees, have experience and knowledge that they can impart to patients.”