A Canadian [removed]study[/removed] finds that one in four individuals will likely face a diagnosis and receive medical care for COPD during their lifetime. The study, the first to provide comprehensive estimates of the risk of developing COPD in the general populations, was published in The Lancet.

Using population-based health administrative data—a total population of roughly 13 million, researchers conducted a retrospective longitudinal cohort study. The researchers tracked individuals who were free of COPD going back to 1996. They were monitored over the next 14 years to see which of three outcomes occurred: COPD diagnosis, reaching the age of 80, or death.

In all, 579,466 individuals were diagnosed with COPD by a physician over the study period. The overall lifetime risk of physician-diagnosed COPD at age 80 years was calculated at 27.6%, according to the study. The researchers further found that men faced a higher lifetime risk than the women in the study (29.7% versus 25.6%), and individuals of lower socioeconomic status a 9% higher risk than higher socioeconomic status individuals (32.1% versus 23%). Rural residents were also found to have a higher risk of diagnosis than urban dwellers (32.4% versus 26.7%). 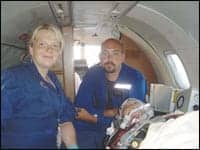