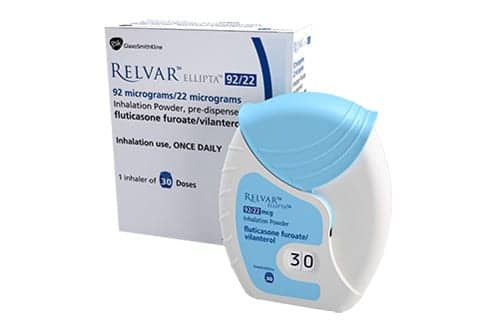 GlaxoSmithKline and Theravance have announced their intent to file a new drug application in Japan for Relvar Ellipta, a combination inhaler for COPD.

There is no known cure for COPD, but the disease can be managed by lifestyle changes, oxygen therapy, and oral or inhaled medications, which may control symptoms and minimize progression of the damage caused by the disease. With respect to medications, regulations often vary from one country to another. For example, currently FF/VI is not prescribed for treatment of COPD in Japan, but approved in 2013 by the Japanese Ministry of Health, Labour and Welfare (MHLW) for treatment of asthma in patients above 15 years old. Because the collected efficacy data within the FF/VI phase III clinical trial on Japanese patients with COPD were insufficient, the present study for Relvar Ellipta aims to collect further data from a group of patients treated with combination FF/V if compared with its component VI.

The clinical trial included 1,620 patients from 11 countries with moderate to severe COPD were included, 370 of which were from Japan. The participants were required to have at least one COPD exacerbation in their disease history that needed to be treated based on systemic/oral corticosteroids and/or antibiotics and/or hospitalization during the last 12 months. The patients were also required to have current symptoms of COPD including combination of breathlessness, cough, sputum, and nighttime awakenings requiring treatment with the medication albuterol [salbutamol]) for a minimum of 5 of the 7 days immediately preceding their participation.