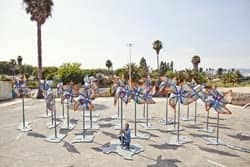 DRIVE4COPD recently unveiled 24M: The DRIVE4COPD Monument, a visual representation of the impact of chronic obstructive pulmonary disease (COPD) in the United States. The traveling monument, comprising 24 large-scale pinwheels—the DRIVE4COPD symbol—to represent the 24 million Americans who may be living with COPD, reaches 14 feet high and spans half a football field. It was designed by artist and sculptor Michael Kalish.

A total of 2,400 license plates were used to construct the 24 pinwheels, each standing between 8 to 14 feet tall with a 6-foot span. The number of license plates from each of the 50 states reflects the percentage of that state’s population affected by COPD. Each of the 24 pinwheels is secured to a base formed into the shape of one or more states that together form the map of the contiguous United States.

“I was shocked to learn that as many as half of the people who may be living with COPD don’t know it and that most people are not diagnosed until they’ve already lost half their lung function,” said Kalish. “It’s my hope that people will come see this monument, think about whether they or a loved one might be at risk, and do something about it.”

When visiting 24M, people can walk through the monument following a self-guided tour to learn about its creation, the impact of COPD, and the DRIVE4COPD campaign.

Following its unveiling in New York, 24M will travel to states that have the highest prevalence and population of COPD in the United States, including Texas, Florida, and California, to increase disease awareness and motivate people to recognize their risk. 24M will be on display in Tampa, Fla, from November 1 to 21, 2011, and in Glendale, Calif, from December 9 to 18, 2011.