Bronchiectasis, a permanent and progressive dilation of the lung’s airways, holds prognostic value, according to the results of a study published online ahead of print in the American Thoracic Society’s American Journal of Respiratory and Critical Care Medicine.

Investigators associated the presence and severity of bronchiectasis with an “increase in all-cause mortality in patients with moderate-to-severe COPD, independent of other known risk factors, including pulmonary function and other comorbidities,” according to lead author Miguel Ángel Martínez-García, MD, of La Fe University and Polytechnic Hospital in Valencia, Spain.

For the multicenter prospective observational study, researchers followed 201 consecutive patients with moderate-to-severe COPD, the severity of which was classified according to Global Initiative for Chronic Obstructive Lung Disease (GOLD) criteria.

During a median 48 months of follow-up, there were 51 deaths, including 43 among the patients with bronchiectasis. After adjusting for other factors, bronchiectasis was associated with a significantly increased risk of all-cause mortality. Age, Charlson Index, and post-bronchodilator ratio of FEV1 were also shown to have prognostic value.

“If the prognostic value of bronchiectasis in patients with moderate-to-severe COPD that we found is confirmed in further and larger studies, it would have an important clinical impact,” said Martínez-García, “Bronchiectasis can be reliably diagnosed with high-resolution CT scanning, and effective treatments are available, potentially reducing the risk of mortality in patients with COPD.” 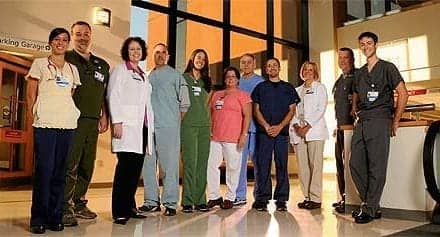 Tackling Variation in the Care of Patients with COPD