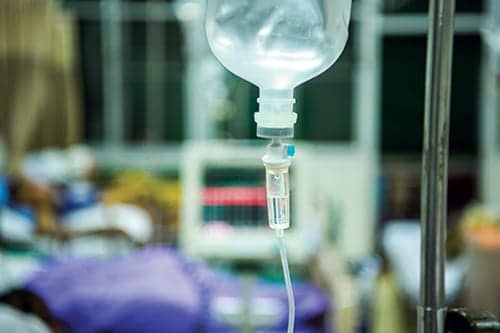 The US FDA approved Opdivo (nivolumab) in combination with Yervoy (ipilimumab) for the first-line treatment of adults with malignant pleural mesothelioma that cannot be removed by surgery. This is the first drug regimen approved for mesothelioma in 16 years and the second FDA-approved systemic therapy for mesothelioma. The FDA granted approval to Bristol-Myers Squibb Company.

Malignant pleural mesothelioma (MPM) is a life-threatening cancer of the lungs’ lining caused by inhaling asbestos fibers that about 20,000 Americans are diagnosed with each year. MPM accounts for most mesothelioma diagnoses, and most patients have an unresectable (unable to be removed with surgery) tumor at time of diagnosis. With currently available therapy, overall survival is generally poor. Opdivo and Yervoy are both monoclonal antibodies that, when combined, decrease tumor growth by enhancing T-cell function.

This combination therapy was evaluated during a randomized, open-label trial in 605 patients with previously untreated unresectable MPM. Patients received intravenous infusions of Opdivo every two weeks with intravenous infusions of Yervoy every six weeks for up to two years, or platinum-doublet chemotherapy for up to six cycles. Treatment continued until disease progression, unacceptable toxicity or completion of two years. The objective was to determine if Opdivo in combination with Yervoy improved overall survival compared to chemotherapy. At the time of the analysis, patients who received Opdivo in combination with Yervoy survived a median of 18.1 months while patients who underwent chemotherapy survived a median of 14.1 months.

The most common side effects of Opdivo in combination with Yervoy in patients with MPM include: fatigue, musculoskeletal pain, rash, diarrhea, dyspnea (difficulty breathing), nausea, decreased appetite, cough and pruritis (itching). Yervoy can cause serious conditions known as immune-mediated side effects, including inflammation of healthy organs, such as the lungs (pneumonitis), colon (colitis), liver (hepatitis), endocrine glands (endocrinopathies) and kidneys (nephritis). Patients should tell their healthcare providers if they have immune system problems, lung or breathing problems, liver problems, have had an organ transplant, or are pregnant or plan to become pregnant before starting treatment.

“Today’s approval of nivolumab plus ipilimumab provides a new treatment that has demonstrated an improvement in overall survival for patients with malignant pleural mesothelioma,” said Richard Pazdur, MD, director of the FDA’s Oncology Center of Excellence and acting director of the Office of Oncologic Diseases in the FDA’s Center for Drug Evaluation and Research. “In 2004, FDA approved pemetrexed in combination with cisplatin for this indication, and now patients now have an important, additional treatment option after more than a decade with only one FDA-approved drug regimen.”

This review was conducted under Project Orbis, an initiative of the FDA Oncology Center of Excellence. Project Orbis provides a framework for concurrent submission and review of oncology drugs among international partners. For this review, FDA collaborated with the Australian Therapeutic Goods Administration (TGA), the Brazilian Health Regulatory Agency (ANVISA), Health Canada, and Switzerland’s Swissmedic. The application reviews are ongoing at the other regulatory agencies. FDA approval occurred approximately 5 months ahead of the goal date.

Warning on Use of Melatonin for Children’s Sleep